Point Differential and the Redskins Prospects for Success

They've got the quarterback, now maybe they'll work on the defense. 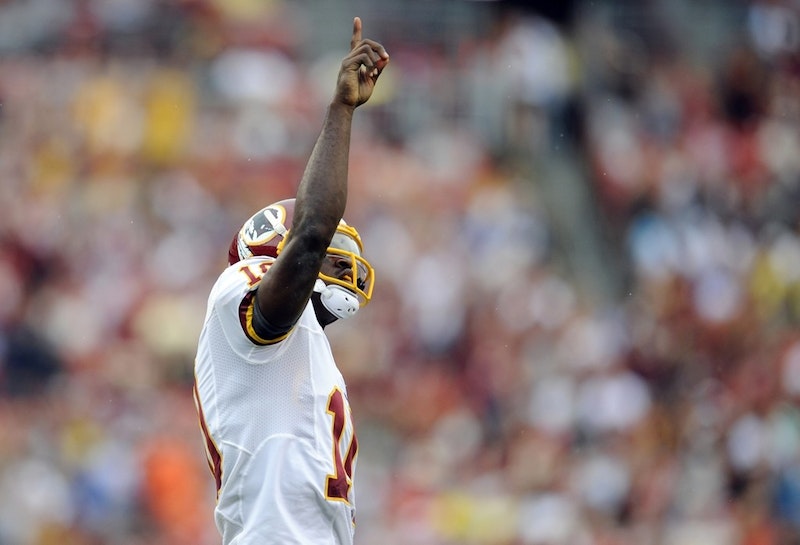 Relatively speaking, baseball is an easy game to predict. It isn’t because the sport is easier to figure out, but because so many games (162) are played. As we’re learning this season, there are surprises (cough, ORIOLES, cough) but most of the time the better teams finish above their inferior counterparts, at least in the regular season.

Football however has a 16-game season. Think about what the baseball season would look like if they only played 16 games. Taking this season as an example, three of the six divisions would have had different winners. Football is a sport of violence, precision, and randomness. Any team with NFL-quality talent can make the playoffs with a good record because all you need is a few lucky bounces added to a 7-9 record and all of a sudden you’re 10-6, a division winner, and playing a home playoff game.

So, judging a football team by its record is a task fraught with peril. Those who pore over the more complex stats can find refuge there, but for the rest of us, there is a simpler stat that everyone can understand. It’s called point differential. It’s simply a team’s points scored minus the team’s points allowed. The theory is this: teams are always trying to score points and prevent their opposition from doing the same. The best teams succeed at both more frequently than lesser quality teams regardless of game situation.

By simple record, the best team in football is cloudy. The Falcons, Texans, and Cardinals are all 4-0. But if you look at point differential the difference between these teams is revealed. The Cardinals have out-scored their opponents by 30 points, the Falcons have out-scored their opponents by 48 points, and the Texans have bested their opponents by 70 points. At least through the first four games of the NFL season, the Texans have been the best team and it’s not particularly close. Of course, strength of schedule complicates this, but it’s only four games into the season so this is all subject to change anyway.

This brings me to the Washington Redskins. As discussed above, the probable best team in the NFL, the Texans, have scored 126 points on the year. Last year the Redskins scored 288 points through 16 games, finishing 26th out of the NFL’s 32 teams. This year the Redskins have scored 123 points, good for fourth in the NFL. They’ve also allowed 123 (not) good for sixth most points allowed this season.

I bring this all up for two reasons. First, to show how weird football is. A bad offensive team can transform into a very good offensive team in one season. Second, if the Cowboys lose Monday night to Chicago (which is likely), the entire East division will be 2-2, and right now, at zero, the Redskins have the second best point differential in the NFC East.

If someone were go draw up a two point plan for winning in the NFL it might go something like this: 1. Luck into a franchise quarterback. 2. Don’t get hurt. The Redskins have the first. The second is mostly luck, though the percentages can be improved through smart coaching (i.e. don’t turn your franchise quarterback into a running back unless absolutely necessary).

Robert Griffin, III has played four NFL regular season games and plays with a cast of offensive teammates that nobody is jealous of, yet he has managed to turn the Redskins offense into one of the best in the league. Yesterday’s game yielded the definitive Griffin moment to this point. Actually, it was a series of moments as Griffin drove the Redskins down the field for the game-winning field goal on the road with 90 seconds left and no radio communication between himself and his head coach. His headset had malfunctioned and with the crowd’s screams ringing in his years he moved the Redskins 56 yards from their 20 to the Buccaneer’s 24, just close enough for Billy Cundiff to hit the game winning field goal. Griffin even completed a seven-yard pass to Santana Moss after the offensive line was called for a five-yard false start penalty to get the yardage back and then some right before the kick.

Griffin’s made a few mistakes and been the benefactor of a few lucky bounces (a fumble on the one yard line resulted in a Redskins recovery in the end zone and thus a touchdown instead of a Tampa recovery and a turn-over), but on the whole he has been one of the most dynamic and effective players in the NFL.

Again, the way to win and win consistently in today’s pass-happy yardage and points obsessed NFL is with a great quarterback. Griffin is showing he’s that guy. This year’s Redskins defense may not be much, but next year’s might. Judging from what Griffin has shown so far this season, he’ll be waiting. And if the NFC East is any indication, the meantime should be quite interesting as well.