Despite flurry of trades, San Diego still has no infield. 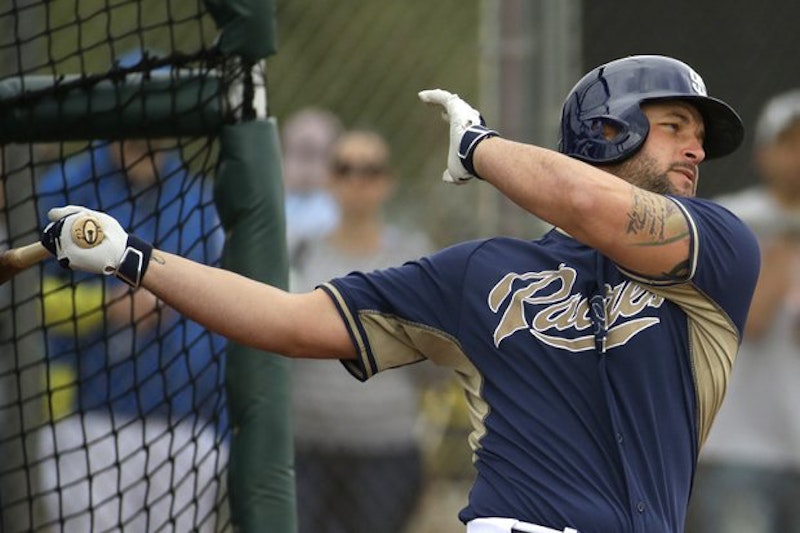 A glance around the big leagues reveals that some of that hope that comes in anticipation of Opening Day may be misplaced. Let’s take a look at the weakest positions in Major League Baseball.

When the Arizona Diamondbacks dealt longtime catcher Miguel Montero to the Cubs it was believed the team would acquire another signal caller. The Montero trade freed up close to $40 million in salary commitments for Arizona but the free agent market for catchers was barren after Russell Martin went to the Blue Jays. The fallout left the Diamondbacks with a fistful of cash and Tuffy Gosewich as the starting backstop. Gosewich figures to be a season-long downer in Arizona. The 31-year-old has appeared in just 55 Major League games and has a career OPS (.553). Gosewich didn’t fare much better during his nine minor league seasons where he hit just .239 with a total of 52 home runs. At least his name is fun to say.

The San Diego Padres were welcomed back to Major League Baseball this winter thanks to the aggressiveness of new GM A.J. Preller. The Padres swapped a slew of players, prospects and cash in an effort to improve baseball’s most anemic offense. When the dust settled San Diego had a new outfield, catcher and an ace atop the rotation. The downside is that the Padres still have one of MLB’s worst infields. Yonder Alonso, once the jewel of the Mat Latos trade, returns for another shot at first base after hitting .240 with seven home runs in 84 games last season. Will Middlebrooks was acquired from the Red Sox to play third base. After slamming 15 home runs as a rookie in 2012 Middlebrooks has been dismal over the past two seasons. The former top prospect cratered in 2014 hitting just .191 in 63 games before he was shipped off to Pawtucket. The Padres will use a combination of Alexi Amarista (career .615 OPS) and the dismal post-Coors Field Clint Barmes at shortstop. New outfielders Wil Myers, Matt Kemp, and Justin Upton will do their best to boost up the Padres’ lackluster infield.

The Yankees never really got around to replacing Robinson Cano’s second base production after Cano bolted New York for Seattle prior to the 2014 season. The team shuffled through a menagerie of has-beens until settling on Stephen Drew after acquiring the veteran from the Red Sox. The Bronx Bombers were so impressed with Drew’s .150 batting average and .271 slugging percentage in 46 pin-stripped games that he was re-signed to a $5 million deal for the 2015 season. At one time Drew had the look of a future star. Unfortunately that time was about five years ago. Drew has been a below average producer since 2010 and his impressive 2013 season with the Red Sox was almost entirely driven by an unsustainable batting average on balls in play.

The Tigers shocked everyone in baseball at last July’s trade deadline when they swapped Drew Smyly and center fielder Austin Jackson in a three-team trade that brought David Price to Motown. The deal left a void in center field that the Tigers tried to fill with the likes of Rajai Davis and Ezequiel Carrera. Davis was miscast and Carrera was overmatched. Center field figures to be a problem again for Detroit as Anthony Gose, acquired over the winter from Toronto, stands to open the season as the starter. Gose has bounced from the Phillies to the Astros to the Blue Jays to Tigers largely because of his speed and defensive skills. Gose’s bat never developed as hoped and he’s compiled a .234 batting average and .604 OPS in 552 big league at-bats. Gose’s candidacy has been boosted by a hot start to Spring Training but Tigers fans may be look longingly upon those Grapefruit League stats when Gose is hitting .230 in June.