The consciously arrogant Super Bowl cornerback is a gift. 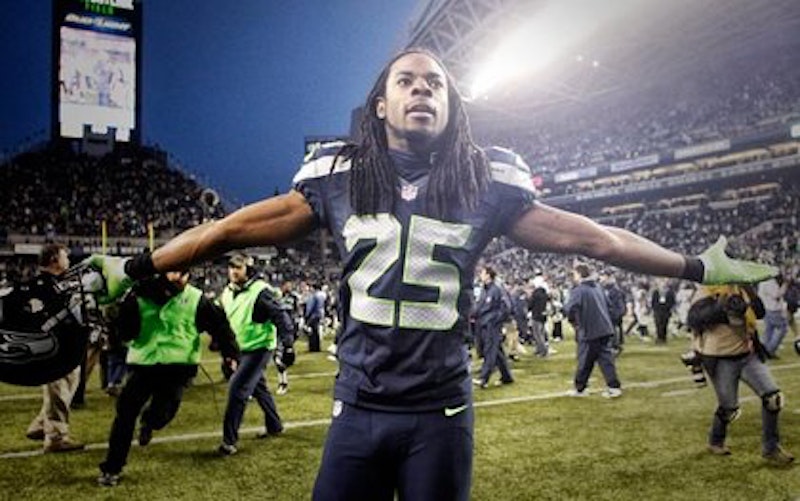 I can't stop reading about Richard Sherman. You don’t often hear much about cornerbacks. If they’re really good, the football rarely makes its way in their direction. They are called “shutdown corners.” Only one ball made its way in this cornerback’s direction in the game that may define his life. Sherman made the game-deciding play, tipping an end-zone pass to his Seahawks teammate, saving the game and the season for Seattle fans, pushing them past the San Francisco 49ers and into the Super Bowl. Sherman timed his leap perfectly on the play. The timing could not have been better for what followed.

After the Seahawks victory, Sherman’s post-game interview exploded the boundaries of what athletes, especially black male athletes, are supposed to say in those usually meaningless final buzzer chats. While it’s fair to say Sherman’s outburst was surprising, even shocking, in its bravado and arrogance, as well as in his general unleashing of unfiltered words on the football gridiron, the backlash has been full of so much racist hatred for two reasons:

For someone interested in the way sport impacts society, Sherman is a gift. A hyper-articulate, consciously arrogant, stereotype-demolishing sports figure who understands the power of the media microscope on athletes. The gift of gab can be threatening. If you keep talking, eventually, people will either want to shut you up or they’ll stop listening. On the field, Sherman gets thoroughly into the minds of his opponents.

Much like Gary Payton, his Seattle forerunner, and Kevin Garnett, his NBA equivalent, he backs up his words with dominant defense. The psychological advantage all three developed, both inside and outside of the lines, was/is integral to their performances. While Payton seemed less conscious of his smack talk, Garnett and Sherman seem to know exactly what they are doing. A lot like Larry Bird, one of the greatest trash talkers in NBA history.

Bird was white and he kept his quotes on the court, talking with a deadpan delivery, so the vast majority of fans don't think of Bird as defiantly arrogant. The media was never threatened by Bird. In fact, the media adored Bird's surliness, and loved the fact that he was the NBA's white wonder in a league that was gradually losing its Caucasian population, especially before the European big-man infusion that came in the 1990s.

Ted Williams viewed everyone he came across as below him, whether condescending to a scrum of Boston reporters or opposing pitchers. Williams knew he was the best hitter in the game and he hated the fact that the game he played was open to the public and made him a celebrity. He wouldn't have survived the modern sports media. At the same time, he never would’ve been openly vilified, skewered on a national level, while outperforming every other hitter in the game. Like Bird, Williams' ornery nature became a quirk. A by-product of an insanely competitive nature, bent on winning and thriving on adversity. Which brings us back to Sherman, who’s motivated by the boos and the sound of his own confidence.

Sportsmanship is a concept that I was taught as a child. It's not about winning or losing. It's how you play the game. The aphorism always felt hollow when you lost. Dealing with the pain of losing is one of the aspects of youth sports that makes it important in development. Learning how to sacrifice, how to share, how to play a part within something greater, these are also essential parts of the experience. But dealing with losing may be the most critical aspect.

Sherman grew up in Compton, California, with strong-willed parents who demanded he resist any of that conforming pressure, instead becoming a leader of his peers, focused on schoolwork and sports, insulating himself and his friends from the traps that befall so many children of Compton. Sherman chose Stanford over USC because it was Stanford.

Lee Jenkins wrote a compelling in-depth profile of Sherman for Sports Illustrated last July, before the season began. In the profile, Sherman explains, "I was strange because I went to class, did the work, read the books and was still pretty good at sports. If you’re like me, people think you’re weird. They pull you in different directions. But those people aren’t going where you’re going. I know the jock stereotype—cool guy, walking around with your friends, not caring about school, not caring about anything. I hate that stereotype. I want to destroy it. I want to kill it.”

I can't help but be interested in Sherman and the story he brings to this American spectacle of the Super Bowl. I want him to destroy those stereotypes. Some might argue that Sherman's braggadocio perpetuates those negative stereotypes. That he makes it easy to call a brash, loud, black male athlete a "thug." I argue that the more we hear the racist, unthinking element of American society use the “n-word” or the code-word "thug," (uttered 562 times on American television, the day after his post-game chat with Erin Andrews, according to Deadspin) the more we realize that Sherman knows exactly what he is doing, and what he is exposing.