And the Diamondbacks want to compete next year? 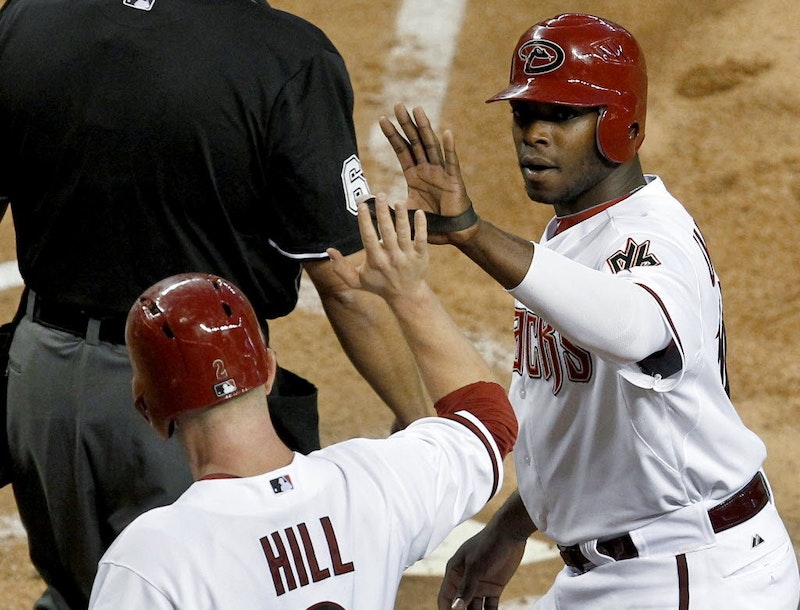 Trade rumors have enveloped Justin Upton all season: the Diamondbacks surprisingly retained him this summer in reaction to the slow development of a market for the 25-year-old outfielder. Strong 2011 numbers, MVP-like even, indicated that a repeat in 2012 was likely, however the young Upton fell to injury and ineffectiveness, as he did during his equally disappointing 2010 campaign. Arizona probably thought that the flashes of brilliance, huge promise, and rave reviews from scouts would be enough to entice rivals ballclubs to surrender top prospects in a potential trade. That was obviously not the case, as interested teams operated by the “What has he done lately?” mentality. Pirates GM Neil Huntington was apparently even reluctant to include outfielder Starling Marte in the deal, who is only Pittsburgh’s third best prospect, behind former first-round picks (2nd and 1st overall, respectively) Jameson Taillon and Gerrit Cole. The fact that Huntington wouldn’t even discuss Taillon or Cole is evidence the opinion that Upton is not a priority in major league front offices. He’s viewed as a reclamation project rather than a superstar, which is incredibly off base.

Detractors will point to an alleged attitude problem, of which there’s not a lot of evidence. Arizona managing partner Ken Kendrick, in an attempt to imitate George Steinbrenner, circa 1980, blasted Upton and teammate Stephen Drew on the radio, stating that the former “is an enigma at this point.” By the time June rolled around, even fans in Arizona were booing him. All of this for a player who, by all indications, rarely slacks off and plays the game to its fullest. “Everyone around the team will tell you about how much Upton cares and about how hard he works,” says USA Today’s Nick Piecoro. The blog post continues, stating that he even “might be trying too hard.” Blaming Upton’s attitude as a contributing factor for trading him is simply lazy and ill-informed, a lame excuse to avoid citing his 2012 performance as the only reason to deal the slumping 25-year-old.

But, apparently, Diamondbacks GM Kevin Towers is fully committed to the plan. It’s odd, though: trading Upton, their most productive player in 2011 and 2009, is a move that screams Rebuild, yet that’s not the front office’s intention at all. They want to compete next year, and for whatever reason, without the two-time All-Star. The NL West, generally considered one of the weakest divisions in baseball, has beefed up over the last two seasons thanks to the Giants’ sustained success and the Dodgers’ recent spending spree, which doesn’t look to end anytime soon (they’re allegedly eyeing Zack Greinke and Ryan Dempster as free agent targets this winter).

Arizona now wants a long-term, major-league ready shortstop in any Upton trade, which considerably shaves down the number of suitors. Speculation on who the right-fielder might be playing for next year is pointless, as Towers’ demands may change in reaction to the market, but should they remain static, the Rangers and Nationals are logical fits. Elvis Andrus, Texas’ current shortstop, only 24 himself, is in the process of being replaced by number one prospect Jurickson Profar. Andrus is in the middle of a 4.3 fWAR season. Ian Desmond, of Washington, has broken out from mediocrity into stardom rather abruptly. The 26-year-old had never shown much power in his career until 2012; he’s clubbed 23 home runs with a .518 slugging percentage in 112 games. It remains to be seen whether Nats GM Mike Rizzo views these numbers as repeatable statistics forward or the product of a career year. If it’s the latter, he’ll be sure to dangle Desmond to rival clubs, especially with top prospect Anthony Rendon waiting in the minors (in this scenario, second baseman Danny Espinosa would transition to shortstop).

Arizona shouldn’t be so eager to trade their All-Star, especially because of the unresponsive market (not to mention the oversaturated free agent outfield class). Since Towers is so intent on dealing Upton (ownership may be pushing the move, but even then, the GM appears to genuinely endorse it), he’s not going to receive an equal return. The best deal is no deal at all, but sadly for Diamondbacks fans, the front office doesn’t realize it.