Rolando McClain is the Biggest Idiot

What should the Baltimore Ravens do with this dope? 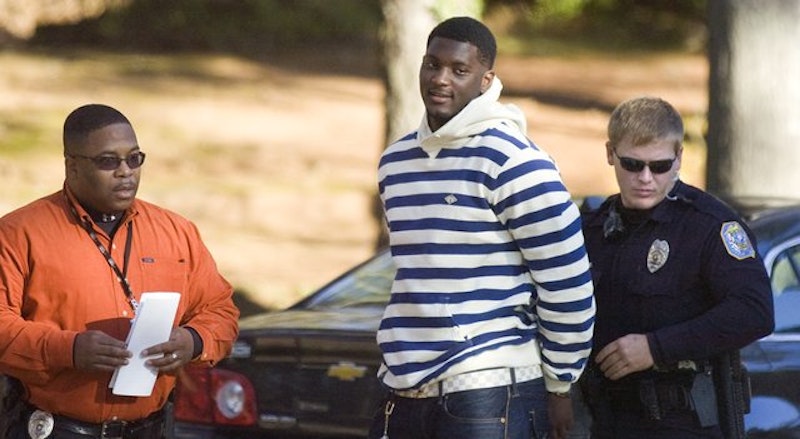 The Baltimore Ravens signed linebacker Rolando McClain, formerly of the Oakland Raiders, to a one-year contract for $700,000 earlier this month. McClain had been suspended, and eventually released, by the Oakland Raiders (bastions of etiquette) for his numerous off-field transgressions and lack of on-field productivity. The Ravens were giving McClain a no-risk attempt to make good on his immense physical gifts. McClain returned the favor by getting his dumb ass arrested over the weekend after an altercation with police in his hometown of Decatur, Alabama.

In high school I developed a theory I call “The Bigger Idiot Theory” that’s served me well in a variety of situations over the past two decades. It simply states that no matter the professional, academic, athletic, or social situation that you find yourself in, there will always be someone there more ill-equipped and out of place than you—the bigger idiot. When I started at a private high school I quickly discovered that my new classmates were essentially the same numbskulls I’d just attended middle school with, only now they had different names and wore navy blazers. The same thing happened when I went to college. After about two days of feeling nervous, I realized that my new classmates were just older versions of the same idiots I had graduated from high school with just a few months earlier.

“The Bigger idiot Theory” has helped me out in countless situations over the years. Nervous about starting a new job? No problem, find the bigger idiot and be glad you’re not that dude. Having trouble getting a date? No worries, focus your attention on your friend who’s even more awkward with women than you. The boost in confidence you gain by denigrating your good friend will make you more appealing to the opposite sex. If you ever find yourself in a situation where you can’t locate the bigger idiot you better run. Odds are you’re the big dummy that everyone else is using to pump up their self-esteem.

Rolando McClain is the bigger idiot, not only for the Ravens but perhaps the entire NFL and the city of Decatur. McClain was the eighth overall pick in the 2010 NFL draft. He starred at Alabama. He’s also been arrested three times in Decatur over the past three years. I know two things about Decatur 1) It’s in Alabama and 2) Rolando McClain gets arrested there… like, a lot. McClain may be a famous, well-paid football player but he’s the bigger idiot in Decatur. He’s the guy everyone looks to when they want to feel better about their own failings. Yes, your door-to-door pork business failed, but have you met McClain? That guy can’t fart and count at the same time.

When news of McClain’s latest arrest hit the Internet and Baltimore airwaves on Sunday night the immediate reaction of many fans was that the team should cut the linebacker. The Ravens haven’t publicly commented on McClain this week, and likely won’t until after the upcoming draft. Baltimore would get no benefit, other than a slight PR bump, by cutting McClain prior to the draft. They’d also potentially tip their hand in regards to draft priorities. The Ravens currently have a Who’s That? of middle linebacker options (no offense Albert McClellan, Bryan Hall, and Josh Bynes). Armed with 12 draft picks this weekend you can rest assured that Ozzie Newsome and his front office will seek to add depth at middle linebacker. If the draft unfolds as the Ravens hope then they can cut McClain loose next week. If the draft doesn’t work out favorably for Baltimore then McClain may stick around until Training Camp, or his next trip to Decatur.