Grayson Allen May Be Duke’s Most Hated Baller Ever

The latest in a long line of villains. 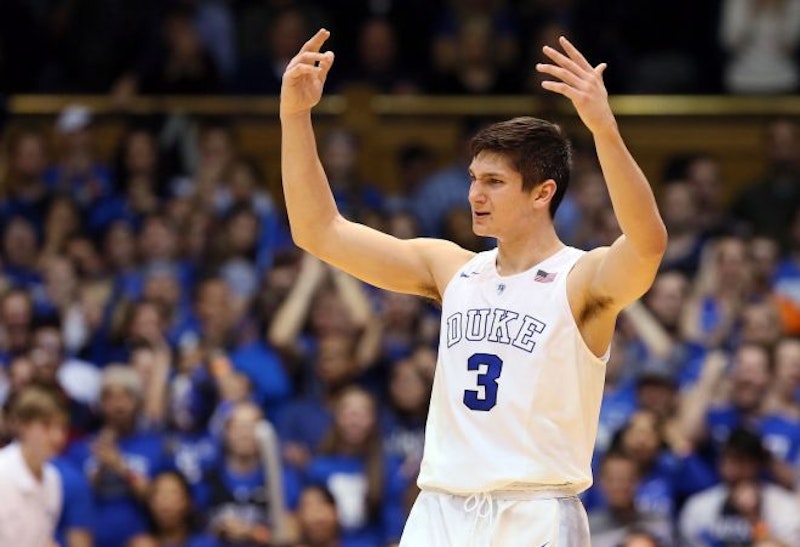 It's not easy for a basketball player to simultaneously elbow the player guarding him and “flop” to fool the ref and get the foul successfully. Few players possess the requisite combination of creativity and deviousness to even conjure up this unlikely combo move. I have to hand it to him—that's chutzpah. Few players are like Duke’s junior guard Grayson Allen, who may be the most hated player ever to don a Blue Devils uniform. Yes, that even includes the despised Christian Laettner, protagonist of the fine ESPN documentary, I Hate Christian Laettner.

Laettner, who hit the most famous shot in college basketball history in the 1992 NCAA tournament, was the first in a succession of Duke players who became villains in every opposition arena they’d visit. The move that cemented his reputation was stomping on the chest of the fallen Aminu Timberlake in that very same 1992 game—the one he hit that buzzer beater in against Kentucky to put his team into the Final Four.

The power forward/center from Buffalo started a long Duke basketball tradition of producing hate magnets. J.J. Redick, 2002-06, was no slouch either. His combination of deadly accuracy from the perimeter and a signature smirk after he’d drained a three-pointer at a crucial time drove opposing fans into paroxysms of rage. That brings us to rule number one of being basketball's most hatred: you have to be good. Spilling all that venom on a mediocre player just doesn't make sense.

The list of honorable mentions for Duke's most hated player is a long one. Greg “Teabag” Paulus, 2005-09, is up there. Paulus’ defensive specialty was standing right in front of opponents elevating on their way towards the hoop, thus earning him his raunchy nickname. Chris Collins, 1993-96, got under the oppositions fan base’s skin with his annoying combination of flopping and taking charges.

There are too many more to list. Many of them didn't really deserve it, but just putting on a Duke uniform makes some basketball fans see red. Many things about Grayson Allen are annoying, including his face, if you happen to dislike the Zodiac Killer of politicians, Ted Cruz. Sometimes Allen frustrates his opponents so much they slap him in that face. He's in a special category when it comes to dirty play. How many players can lay claim to having their own YouTube “tripping compilation” as Allen does? He brought down his third player of this season against Elon in December. Coach Mike Krzyzewski stripped Allen of his captaincy and gave him an “indefinite suspension” after the incident, but Virginia Tech handed the Blue Devils just their second loss of the season in the next game, and he lifted it after just one game. So much for the character-building aspect of coaching he's always on about. Tripping isn’t the most outrageous thing Allen’s been known to do. He once undercut a Wake Forest player who’d elevated high for a dunk, the most dangerous move in basketball. A player could land flush on his head.

Coach K told sports talk show host Colin Cowherd, “There's no Ten Commandments for tripping,” meaning that the suspension’s length wasn't chiseled in stone. Still, there are doubts that he's not disciplining an often out-of-control player properly. NBA correspondent Chris Broussard, who was a guest on that Cowherd show, said that NBA execs want to know if Allen’s just a dirty player or if there are some underlying emotional issues they’ll have to worry about when draft time comes around. They see the videos like the one showing Allen crying while talking to reporters after his third tripping offense and they have doubts about gambling on him. And then there's the one of him on the bench after that trip, throwing a temper tantrum like a four-year-old. Allen may end up having to play out his final year at Duke to convince teams he's NBA-ready.

Some basketball players embrace the villain role and make it work. Former Indiana Pacers guard and Hall of Famer Reggie Miller played that role to the hilt, having an ability to draw energy from all the taunts and boos. One of the most memorable performances in basketball history came with 18.7 seconds left in game one of the Knicks-Pacers 1995 Eastern Conference semifinals, with the Knicks up by six points. Spike Lee had been trash-talking Miller all night, and the fans rode him hard, but he beat the Knicks by scoring eight points in nine seconds.

Allen’s not Reggie Miller, however. The Pacers superstar was emotionally in control on the court. He was calculating in the way he provoked, while Allen seems to be unsure about his motivations and unable to manage his actions. He’s a finesse player who won't get away with the same things in the NBA. Duke should get him some psychological counseling if they're really in the education business.