The O’s are capping off a successful 2013 with a dismal offseason. 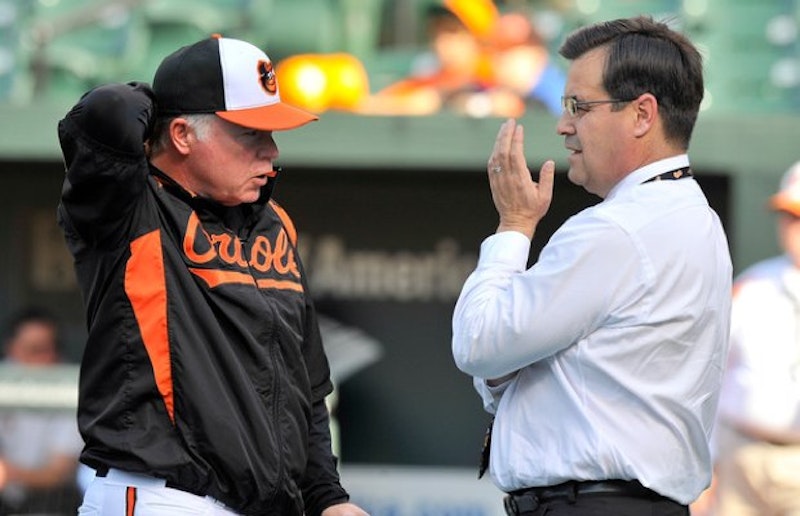 The Baltimore Orioles finally (and shockingly) became relevant again in 2012. They followed up that miracle season with a strong, albeit disappointing, 85-win 2013. Thing is, though: the 2013 team was better than the 2012 team, or at least their success was more repeatable. The two clubs were successful for very different reasons: the 2012 O’s relied on a lot of luck, especially in the pitching department, while in 2013, they were held up by two offensive pillars, Chris Davis and Manny Machado. Good years from Adam Jones and JJ Hardy are really the only two things linking the seasons.

With that taken into account, it makes the most sense to view 2013 as independent of 2012. In fact, GM Dan Duquette should forget 2012 even happened. Had the O’s been terrible again in 2012, which was predicted, 2013 would have looked incredibly promising, and not slightly disappointing. It would have been, “Watch out for next year,” and not “They had a good run.” The 2013 O’s are the team you build on, improve upon, tinker with. This is the team you augment with free agents. They don’t have to be Robinson Cano or Jacoby Ellsbury. They don’t even have to be Ubaldo Jimenez or Ervin Santana. They can be Corey Hart ($6 million/one year with incentives), Bartolo Colon ($20 mil/two years), and Dan Haren ($12 million/1 year).

This is the time you trade for buy-low players (like Logan Morrison) and dish out a slew of minor league deals, which gives them their best shot at finding a late blooming All-Star. Mike Morse, Nelly Cruz, Jose Bautista, Chris Davis anyone? Minor-league deals are also the best way to build a deep bullpen. This is the time when you lock your stars down to multi-year contracts. Davis, who’s two seasons away from free agency, might be too pricey, but the 21-year-old Machado could certainly be convinced to stay with the club long term, even if Scott Boras is his agent.

The Orioles aren’t doing any of that. In many ways, they’re doing the opposite. Duquette did sign Grant Balfour to a $15 million/two-year contract, but then he quickly, and clumsily, backed out of it after “issues with his physical.” It seems more like the O’s got cold feet, for whatever reason. The whole fiasco stinks of owner Peter Angelos. Balfour will likely file a grievance against the team, and has gotten many medical professionals to vouch for him. One doctor said, “For a guy in his 30s who has pitched six or seven years since his rotator-cuff repair, his MRI on his shoulder looks remarkably good." Oh yeah, and the only reason they wanted Balfour in the first place was because they traded closer Jim Johnson to the Athletics because of his rising salary. The real malady revealed by this situation doesn’t belong to Balfour, but Angelos. The diagnosis? Chronic frugality.
This is the most important offseason the team has had in years, and what has it produced? Reliever Ryan Webb ($4.5 million/two years) and second baseman Jemile Weeks, acquired in the Johnson trade. They’ve lost Johnson and outfielder Nate McLouth.

As the offseason closes, and even straggler free agents find homes, the O’s will turn from a promising team, a serious threat in the AL East, to a minor worry, a decent club, a team with many holes. Right now, Baltimore has a strong offense and an absolutely dreadful pitching staff. Chris Tillman (inconsistent) and Wei-Yin Chen (he’s a decent number four) anchor the rotation, which tells you about the other guys on the staff. There’s gotta be a silver lining, though, right? Well, Troy Patton was suspended for only 25 games.

Here’s the deal with the O’s: they’re a large market team with a small market owner and a below average GM. Until Angelos sells the team, or hires Andrew Friedman’s clone, Baltimore won’t have any sustained success. I don’t see either of those two scenarios playing out in the near future.