How We Read About the NBA

On Zach Lowe, the Blazers, and NBA fandom. 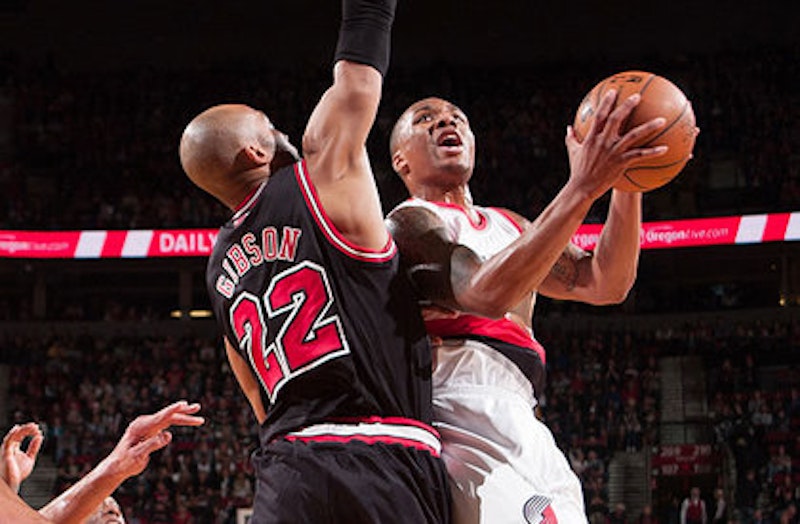 The Portland Trail Blazers are the surprise of the NBA season. With a record of 26-8, the Blazers have created kindling for heated NBA discussions about "true contenders," "defense winning championships," "jump-shooting teams," and other topics for supposed NBA experts who refuse to accept the unexpected outcomes that are part of every NBA season. Those that follow the NBA and MLB obsessively can be similar to music or literature reviewers, dealing in archetypes that threaten a pure appreciation for entertainment, focused more on cultivating their own spheres of opinion. Endless rankings of teams and players. Never-ending trade speculation and team financial-planning stories, juxtaposed with clips of bizarre plays and highlights. It’s clear that various media outlets are clamoring to seize the power that our sporting obsessions have over us. I’m guilty of the same obsessions. However, my desire is not to be an "expert," but to share passion.

The ubiquity of Grantland, SB Nation, and Bleacher Report gives rise to the platform for a new understanding of basketball, and a new way to follow everything that surrounds the actual watching of the games. It allows intellectually curious hoops fans an outlet for their curiosity. However, the desire to rate every player often becomes the focus. Our collective obsession with gambling leads to endless predictions. For so many, watching games becomes a financial investment or an intellectual exercise instead of an emotional and collective one.

Obsessing about player salaries, trades, contracts, and who should get fired, while proving your expertise through statistics is one way to write about professional basketball. It’s quickly becoming the new dominant paradigm. The need to know-it-all can be all consuming. The analysis-crazed NBA scribe of this modern landscape is Grantland’s Zach Lowe, who admits he is now mostly a "coldhearted observer" of the NBA. Though his writing is full of defensive knowledge, I find his focus on breaking down sequences of five-man defense into their individual parts laborious. While offense has long been held as the focus of the casual fan, defense has an air of expertise surrounding it. For the past several decades, playoff basketball has been dominated by great defensive teams, with a few exceptions, and the teamwork and unity that defense demands can bring crowds together, create a sense of identity among teammates, and show us the selflessness we desire from the abstract concept of "team.”

The average fan gets excited by a dunk, a blocked shot, or a three-pointer, but in the old-fashioned playoffs, when the pace slows down, defensive stops enable a team to go on game-deciding runs. Defense represents hard work, discipline, and a systemic approach, but longer arms and good footwork can make players defensively skilled without the same amount of effort required by others.

At its root, Lowe's style of observation is an education in defensive principles, evaluation and a way of assigning praise and blame. The detachment is implicit. If someone scores, it must be someone's fault. It's not a coincidence that Lowe was originally a crime reporter. A few tired pop culture references do not change the tone. Are we reading about the NBA purely to gather information, or to share passion? In a way, this question boils down to the individual: do we want carefully reasoned, mathematical arguments, or descriptions of the humans who put on the jerseys and represent our cities, their efforts, their successes and failures, their career arcs, their loneliness? In order to get deeper, the writer has to spend time with the athlete and the athlete has to trust the writer. Julius Erving's new autobiography, written with Karl Taro Greenfield, is an attempt at that deeper understanding. Maybe it's only possible in retrospect, after the ball stops bouncing and the career is finished.

When we worship new advanced stats we turn on the clinical, analytical side of our brains, but we often lose the very reason most of us love the NBA: the unexpected outcomes, the artistry and creativity that makes an offense fluid and aesthetically pleasing, the unity of five players working together.

Let's take a look at Lowe's recent encapsulation of the Portland Trail Blazers. Remember, this year's Blazers team represents three things: 1) a surprise team that is exceeding all expectations; 2) an offensive-minded, jump-shooting team that defies the conventional wisdom of what makes a successful playoff team; and 3) the divided focus on the future and playoff potential of each team, after only two months of a six-month-long regular season.

First, let's note the #4 ranking of the Portland Trail Blazers. In this Grantland piece, all 15 Western Conference teams are ranked, though the ranking is mostly a way for the reader to understand we are in the hands of an "expert.” The Blazers are good, but not quite as good as their record, and there's no great shame there. They've played the easiest schedule (by a hair) among Western Conference teams, and three of their next four games come against the Clippers, Heat, and Thunder. They're 22nd in points allowed per possession (tied with the Knicks), one spot behind Milwaukee. Repeat: They are 22nd in defensive efficiency. Translation: They are bad at defense.

We get the "Yeah, but..." in the first sentence. We knew this was coming before we started reading. Can we blame Lowe for feeling defensive about his stance on the Blazers? When everyone who follows the NBA is collectively amazed by something, the need for a reality check from the guy who everyone worships to "set them straight" is probably overwhelming. Now here comes the very rational (I agree completely with him) evidence: tougher schedule coming, weak defense.

Look, Portland is awesome. I love watching them. I have no problem with their three-point volume or LaMarcus Aldridge jacking mid-range jumpers at a record pace. They have the best offense in the league, and it's not all that close. Damian Lillard is shooting, I think, 4756 percent in crunch time. It's just hard to find teams that make deep postseason runs with bottom-10 defenses.

Now the "Don't get me wrong, you can love the Blazers, but..." statement. And it's probably true that the Blazers will need more defense, especially backing up Lopez at center. He's about to show why the offense isn't sustainable.

There are some caveats here. Portland's starting lineup, which has logged more minutes this season than any other team, has allowed just 101.8 points per 100 possessions—equivalent to a borderline top-10 mark, per NBA.com. The team’s been a smidgen better with the starting frontcourt of Aldridge and Robin Lopez, and it's doing just fine on the defensive glass when those two play. C.J. McCollum has yet to suit up.

Things get dicey the moment any of Portland's bench players comes in, especially one of the two bench bigs—a duo that now includes Meyers Leonard instead of Thomas Robinson.

Now we get an explanation of where the biggest weaknesses are. Again, logical, but also about assigning specific blame.  He's not wrong, to defend in a series against the best teams in the West (especially Houston and San Antonio), the Blazers will need to trade for a backup center. Think ahead, don't think about now. Reasonable.

Portland's clutch success is also unsustainable. The team is 10-1 in games that have been within three points in the last three minutes, and it has scored 138.5 points per 100 possessions in those situations. It has been damn near perfect on both ends. That never lasts. The positive vibes will die away. Rational thought! Stop getting ahead of yourselves! He's probably right that the clutch success won't last. However, the fact that the Blazers move the ball so well and have a player who can create his own shot (Aldridge from 20 feet, extending those long arms) means that they will get better shots in crunch time than most other teams. Of course, that would go against the traditionally rational argument that unusually good records in close games are impossible to maintain. Instead of writing, "That is unlikely to continue," Lowe claims, "That never lasts."

This is a really good team, and if you want to slot the Blazers at no. 3, that's fine. But they don't belong in the top two, and I have a feeling that when we get through 82 games, we might regard them as no. 5 or no. 6 on this list—better than their internal preseason expectations, by the way.

If you want to believe the Blazers are third best in the West, I will allow that. But here’s the big expert moment. "But they don't belong in the top two," (that's right, I said it, they don't belong at the top!). Then Lowe zooms out, going back to the big picture, which he has to, because, after all, the regular season means nothing, you bozos, which is the implication underlying every list of team rankings you read related to any sport today. Lowe explains that by the end of the year, "we might regard them as no. 5 or no. 6 on this list," again, explaining how important the list is, and how unsustainable the success of this little basketball team from Portland is. He qualifies this by emphasizing his insider status, which must have mystical properties. "Internal expectations" must put it all into perspective. Coach Terry Stotts didn't have any dreams of his team being this good, you overzealous maniacs!

Let’s step back for a second. Zach Lowe is not writing in a vacuum. He’s responding to the overzealous hoopla that accompanies any upstart team that becomes the flavor of the first two months of a season. He’s reacting to the Blazers' Internet fan base that is quick to react to any criticisms of their team. He’s responding to passion with reason, logic and expertise. He’s not an evil man, though he does have a disproportionate amount of clout regarding the way many fans think about the NBA. My point is not to blame Lowe for his powers of observation. The story of a season can be better understood through numbers. My point is not that the playoffs should not be the ultimate goal. My point is this: cold-hearted observation will eventually leave us all cold.

Enjoyment, entertainment and aesthetic pleasure should be more than enough. There is room for humanity and surprise and irrational passion. The desire for fans to claim “We’re the best!” is tiresome and arbitrary. The desire for NBA writers to respond, “No, you’re not the best! And I have proof!” is even more exhausting and humorless. And yet, we will always have that urge to dissect what we see. There is no gospel of NBA truth. No game is utterly quantifiable. Let’s find a balance between the extremes of drunken, idiotic fandom and robotic, calculating fandom.