Teams, go ahead and save your money. 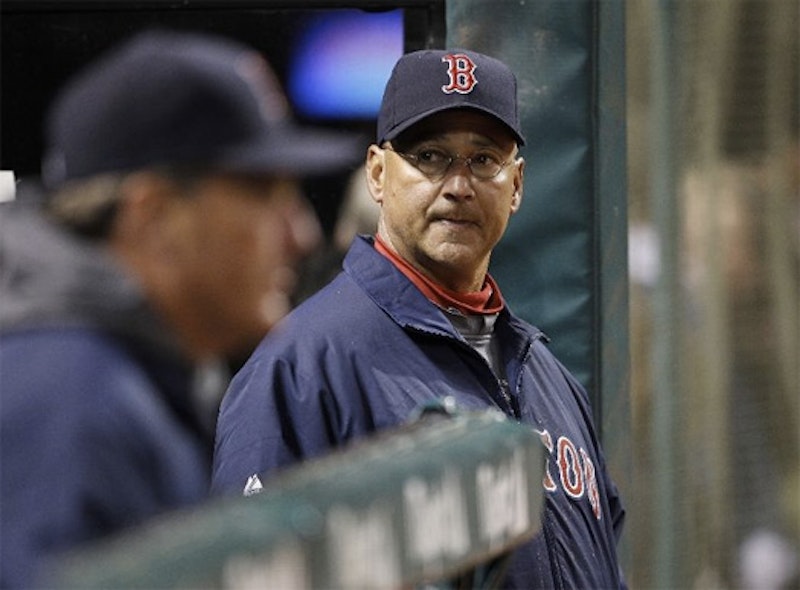 What do Major League Baseball managers really do? Sure, they handle pitching changes and the lineup card (sometimes), but their main job is massaging the giant egos that float through the clubhouse. When a manager can’t do that, it’s time to go. Terry Francona was in that exact position throughout September, which is why he isn’t going to be Boston’s skipper in 2012. The whole Red Sox fiasco got me thinking, if Tito wasn’t controlling his players or at least containing their idiocy, what was he doing? Probably playing cribbage with Dustin Pedroia, because he certainly wasn’t using his time to prevent the epic collapse of 2011.

Good managers often come along with good GM’s. That’s no coincidence. For many years, Francona was a puppet of Theo Epstein, working around statistical analysis rather than the old baseball that he grew up with. Francona never made an inspired pitching change or called for a brilliant defensive shift. What he did do well, though, was listen to his superiors. He garnered respect in the clubhouse and was nice enough to have a lasting effect on most of his players. Like many managers, however, his clout with the veterans eventually waned, which rendered him ineffective.

Art Howe is another example of a manager simply being a puppet for a savvy GM. Michael Lewis’ Moneyball points out that Billy Beane runs the Athletics entire operation from his office. Howe had the reputation of a calm and stable man by his players and the media, someone who commanded. Beane took care of the rest. Everything from who was playing that night to who pitched in the seventh and eighth innings was all up to Beane. It’s no surprise then, once he moved to the Mets, Howe saw his winning percentage dip dramatically.

While the Angels are paying Mike Scioscia $5 million annually for the next eight years, Boston could use that money to sign a decent starting pitcher or a couple of bullpen arms. Managers don’t matter nearly as much as the executives that hire them. Tom Ricketts finally realized that when he traded for Epstein earlier last week. Instead of dumping the cash on a Tony LaRussa type, Ricketts wisely invested nearly $20 million in his new general manager instead.

Francona proves that no team needs a Hall of Fame manager. Incoming Boston GM Ben Cherington won’t have any trouble finding a replacement. Potential candidates like Gabe Kapler, Ryne Sandberg, and Dave Martinez are all viable options. As long as they can keep John Lackey and Josh Beckett out of the fried chicken and off the suds, they’re all right in my book.