Will the Red Sox keep the slugger? 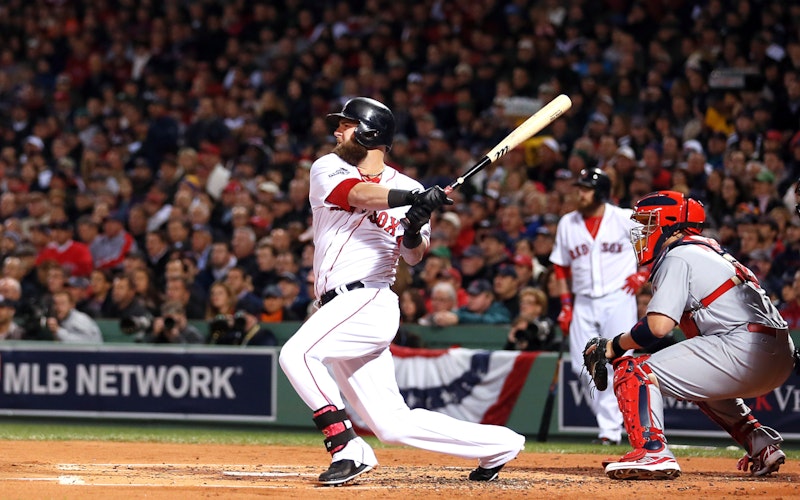 My theme for this World Series: Can someone, anyone, get Mike Napoli out?

The Detroit Tigers were burned repeatedly by the Boston first baseman. The Cardinals’ keystone cops act in the first inning of Game One of the World Series resulted in the Red Sox loading the bases for… who else? Napoli. The former Angels and Rangers slugger quickly obliged with a three run double to left field that left Cardinals shortstop Pete Kozma feeling even smaller than his .548 OPS. (He didn’t fare well in the Cards’ 4-2 win last night, but you get the drift.)

After signing what appeared to be a three-year $39 million contract in the offseason, then settling for a one-year incentive laden $5 million contract after a degenerative hip condition was discovered during a physical, Napoli has been a vital cog in a Red Sox lineup that has an unnatural ability to deliver with runners in scoring position. I’m pretty sure Daniel Nava (.356 BABIP) is a wizard and Jarrod Saltalamacchia (.372 BABIP) sold his soul to Satan. Napoli has rebounded from a disastrous 2012 campaign in Texas that saw his batting average drop 93 points and his OPS sink to .812 from a career-high 1.042 in 2011.

The Red Sox clearly took note of Napoli’s 2012 BABIP which was a career-low .273. After hitting .344 on balls in play during his monstrous 2011 season Napoli’s 2012 decline was driven in part by bad luck. The Red Sox front office took the chance that Napoli would rebound in 2013 and were handsomely rewarded. Napoli bounced back to hit .367 on balls in play this season and set career-highs in runs, doubles, and RBIs.

After breaking into the big leagues as a catcher with the Angels Napoli was dealt to the Blue Jays for Vernon Wells of all people. Toronto GM Alex Anthopoulos was generally credited with fleecing Angels’ GM Tony Reagins in the Wells deal that saw Anaheim take on over $80 million in salary guaranteed to a declining player. Anthopoulos promptly flipped Napoli to Texas for reliever Frank Francisco, a deal he probably wishes he could call a “do-over” on. Napoli went on to become a valuable member of the Rangers club that made it to the 2011 World Series while Francisco saved 17 games for Toronto before leaving for the Mets as a free agent. Napoli did his best to propel the Rangers past the Cardinals in that 2011 Fall Classic as he hit .350 with two home runs and 10 RBIs in the seven game series. Napoli’s Rangers fell to St. Louis in seven games. After lashing a three-run double in Game One of the 2013 World Series Napoli seems to be back up to his old tricks and has no love for the Redbirds.

The catcher turned first baseman has slammed four doubles and two long home runs and knocked in six runs in Boston’s 2013 postseason run. Win or lose Napoli will be looking for a new contract this offseason only this time he’ll be positioned as a home run blasting playoff hero rather than a thirtysomething with a bad hip coming off a poor season. The choice to retain Napoli or let him walk will be a difficult decision for Ben Cherington and company. They aren’t likely to get another bargain deal. In the meantime the Red Sox will enjoy Napoli for the rest of the Series and hope he continues to batter the Cardinals like he did in 2011.