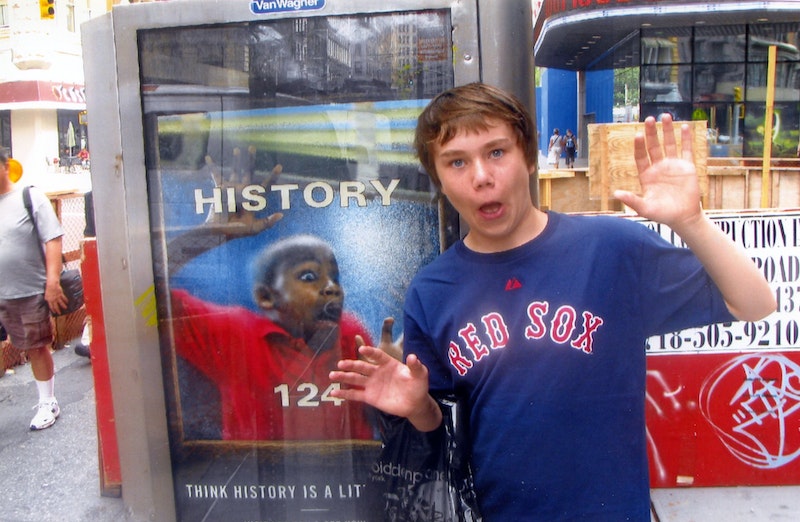 One of the most irritating hangovers from this year’s presidential election—I realize it’s not November yet, but the ludicrous amount of political coverage makes it feel like the morning after—is the daily use of Donald Trump’s trademark “Sad!” in the media. The joke’s so rotten maggots are feasting on it, but still, even sportswriters (and film, music and performing arts critics) have taken the bait.

An example: I like The Boston Herald’s Michael Silverman for takes on my lifelong team, the Red Sox—and the Herald blows away The Boston Globe—but I winced when he opened an August 16th column: “Sad! Even though they are so close in the wild card chase [and the A.L. East Division lead], nothing about the 2016 Red Sox screams greatness.” Excise the perfunctory “Sad!” and Silverman aptly sums up the exceedingly messy and maddening team.

Silverman’s too tough on David Price, I think, speculating the 30-year-old might never regain the form that led President of Operations Dave Dombrowski to lay out $217 million for the free agent during the offseason. Price is a horse, pitches a lot of innings, racks up the strikeouts, and is just having an abnormal year. He gives up too many bombs, but is also the victim of some shoddy defense. But Silverman’s on the nose about the bleating all year from Red Sox fans (on social media; imagine what Grady Little would’ve endured in ’03) that manager John Farrell get the pink slip immediately. I guess Farrell will walk the plank if the Sox don’t make the playoffs, but so what, managers come and go, and their influence on games is vastly overrated. They’re given a roster by ownership and the front office: aside from either shining or flopping on bullpen moves, an organ grinder’s monkey could essentially do the same job. And it wasn’t Farrell who acquired demolition reliever Fernando Abad from the Twins on August 1st. It wasn’t Farrell’s fault that promising set-up man Carson Smith (acquired, along with the horrid Roenis Elias for the workday, to be charitable, Wade Miley) needed Tommy John surgery just after the season began.

As Silverman says, more politely, the Sox suck in close games, even though the team leads MLB in runs scored. On Sunday, in contrast, the Orioles overcame a 6-run deficit against the Giants—which of course pissed me off to no end—and held their position in the standings. I think the Sox have pulled a similar comeback once this season, but the O’s are a great team from the 7th inning on.

Back to messy: there’s no confluence of strong pitching and potent bats this year (leaving aside occasional blowouts, like Sunday’s torching of ace Zack Greinke, coupled with yet another top-notch job by Boston’s current best pitcher Rick Porcello). And there’s no use moaning about a very weird schedule this season—home games at Fenway were front-loaded, and the team’s now on a four-city road trip—since sometimes you get a break, sometimes not. Great teams overcome such obstacles.

The Red Sox aren’t great this year. (I didn’t think they were spectacular in the freaky 2013 World Series year, at least not like the machine-like team of 2007, but I’m not complaining.) Worse than the starting pitching is the bullpen: there’s no consistency. Matt Barnes is day-to-day: he rescued closer Craig Kimbrel in Boston’s sole win against the fire-sale Yankees a week ago, and then was a disaster in his next appearance. Likewise, mid-season acquisition Brad Ziegler can be dominant (like on Saturday when he inherited a bases-loaded/no outs predicament from Barnes and struck out the side on 10 pitches and averted another bullpen disaster), or putrid. Junichi Tazawa, reliable for several years as a set-up man, is burnt, just proving that—aside from the elite—relievers are relievers are relievers. They’re like ripe bananas on the kitchen counter: stellar for a couple of days, and then ready for the trash. And it’s a shame that Koji Uehara, now 40 and showing it, is on his last legs. No Koji in ’13, no World Series win. When Koji was a monster, it was the best inning for Sox fans to watch. Unlike Kimbrel and Jonathan Papelbon, two divas who take forever to throw a pitch (you can read 10 pages in a novel before Kimbrel releases the ball), Koji was all business.

It’s a lot of fun watching Mookie Betts move into superstar territory, and same with Xander Bogaerts (though he’s in a massive slump right now) and it was Dombrowski’s best deadline decision not to move outfielder Andrew Benintendi as part of a package for Chris Sale. Benintendi reminds me of Fred Lynn back in the 70s, and now that Fenway has padding on its walls he’s less likely to get banged up like the latter did.

The 2016 Red Sox scream, “Wait till next year!” I don’t want to, especially since this team had the potential to be formidable in October. It’s possible, of course, that the Sox put together a 10-game winning streak, win the division and ride that momentum into October. It’s more likely that Betts will be bowling when the playoffs begin.