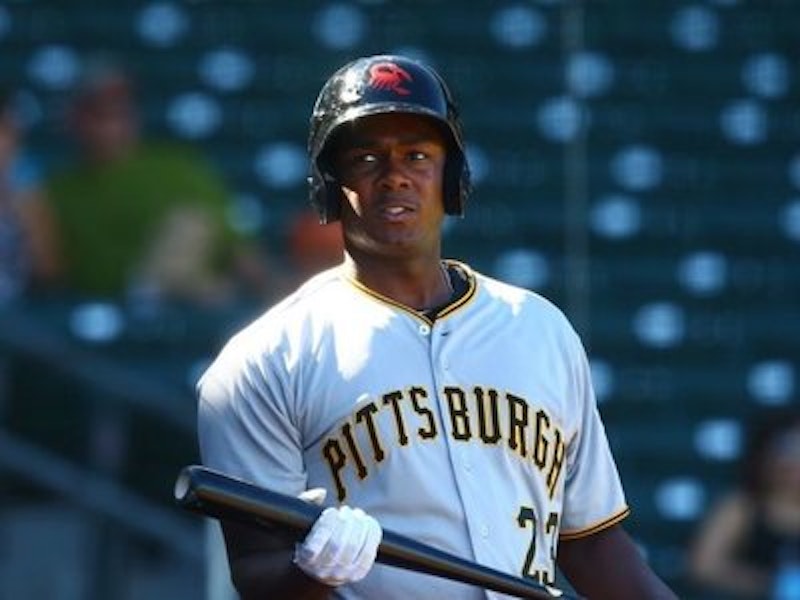 Sometimes it’s truly good to be on the road during the MLB trade deadline that produces a jittery stop-start nerd miasma. With tote bags in hand you’ll be surprised at some odd location when you finally hear Francisco Liriano was traded to Toronto or Jon Niese will once again be wearing the sickly blue and orange of the New York Mets, trading places with Antonio Bastardo of all people.

I decided on Columbus, Ohio, where the Pirates AAA team from Indianapolis was arriving for a four-game series against the Columbus Clippers, the AAA squad of the hyperactive powerhouse known as the Cleveland Indians. We drove by Progressive Field in downtown Cleveland as the Tribe was preparing for a slaughter series against visiting Minnesota and the hapless Twins. Some websites including nbcsports.com had already declared the Indians “losers” on the trade deadline hype, while hearty Midwestern print columnists were referring to the surging efforts in Cleveland as the “All-In-dians.”

As the multi-player deals went down I began to wonder if any of the Clippers roster would be intact to play Indianapolis as August arrived. There is a whorish quality to the AAA baseball fan experience. Not only do cities get jerked around by parent clubs—Columbus was long-time Yankees and Pirates farm territory—star players at AAA rarely linger as the injury bug at the MLB level constantly summons them. Some players last as long as Jodie Foster’s cigarette in Taxi Driver while others languish with .195 averages on the cusp of The Show and quietly transform into the pro baseball version of Klaus Kinski.

Having caught the Bucs A-level minor leaguers during their visit to the Hudson Valley as few weeks ago, I figured why not continue my strong road support by taking in the AAA kids known as The Indianapolis Indians? They put the “International” in International League. They’ve got a South African shortstop and a Lithuanian reliever and a DH named Gamache.

Our arrival in Columbus found the once-boring city now thriving, with Cincinnati Reds fans barely outnumbering those supporting the Indians. But who’s counting when you have an NHL franchise downtown and a fine Major League Soccer facility just up I-71? Fan buzz near the ballpark was more about Homer Bailey’s return as the dugout hugs and new colored laundry was distributed to transient players this week.

None of this was around when I spent my high school nights wandering the dead streets of Columbus and the Ohio State campus. There were but a few record stores and a midnight movie house to keep us bumpkins from rural Knox County entertained. On this trip, every time I saw new cool stuff to do I felt cheated. Back in the early 1980s Columbus was a Wonder Bread cowtown. Eventually as the decade grew there were quality punk rock shows to attend and you could always buy overpriced goth stuff from Ronald Koal at a shop called “Mothra Wrapped in Black” but for the most part the city was still ruled by Bubba, even after the watershed moment of Devo’s return to the capital city for a major concert in October of 1981.

But enough about my pre-college late-teen suffering. How about the state of the AAA Buccos franchise from an even more mundane Midwestern location? Why is Indianapolis mimicking the parent club, hovering at .500 with anemic run production and downright laughable baserunning? Why is slugger Josh Bell, now a first baseman, still wearing a AAA jersey when the Pirates could use his spark and confidence to placate an angry fan base and torture opposing pitchers? Probably because the front office thinks Bell would follow the usual script, as seen in Gregory Polanco’s call-up last season. After near-riots by Pirates fans and much bloodletting on sports talk radio, the Phenom arrives and hits .887 or so in the first few weeks and spinning newspapers scream his name in 72-point type. Suddenly the digital video gets around the league and his production plummets. Relievers such as Joe Blanton or Ross Ohlendorf humiliate him on national TV with strategic control and crafty hurling and a smirk to go with it. Phenom then sees his trademark swagger go down the drain.

After seeing Bell up close in Columbus, I don’t think that’s going to happen. He seems different, more confident, larger than his opponents in so many ways. “Big in the mind” as NYC street basketball legend Joe “The Destroyer” Hammond would say. Bell’s brief call-up before the All-Star break turned Pittsburgh into Fun City for a week, especially after a towering grand slam to crush the Cubs in his second MLB at-bat. He was curtain-called, and fans demanded he remain and take over first base from a wilting John Jaso.

But no, he was back with Indianapolis. He went 1-for-4 in a 1-0 loss to the Clippers, stole a base. He struck out in the ninth with a man on against Clippers’ fireballer Shawn Armstrong, who was one of the players in the Jonathan Lucroy Milwaukee-to-Cleveland non-deal. Bell took a mammoth cut at a 96 mph fastball from Armstrong that almost blew my Bucco hat off my head in the third row of Huntington Park. Armstrong then got him with a K-Mart blue light special change-up. After the loss, his teammates bolted for the clubhouse and Josh sat alone in the dugout, still kind of hyper, not sullen. His eyes were cocked toward one teammate who lingered to talk with a supermodel in training at the rail. Bell then gazed out at the Belmont Casket Company warehouse beyond the right-center gap of Huntington Park a beautiful cozy ballyard that’s a far cry from the crappy old one on Mound Street near the giant White Castle. Seven years ago Columbus opened this 10,000-seater in the “Arena District” (two of anything creates a “district” in cities like Columbus). I got Bell’s attention and he came over toward the bat-rack end and he tossed a baseball to my 11-year-old daughter who’s along for the ride on this Rust Belt baseball tour meant to stabilize trade deadline vertigo and prepare us for the Dog Days of August.

I noted to Bell that Armstrong seemed afraid to go back to the fastball after his Herculean cut. “I missed the one I should’ve hit,” he said, signing the baseball for my happy youngster. I had saved up my favorite “Videodrome” quote for this very occasion. “See you in Pittsburgh!” I said to Bell as he smiled and bounced down the steps toward the clubhouse. “I hope so!” was his retort over his shoulder. And that’s indeed our next stop on this tour, having survived the gluttony of 10-Cent Hot Dog Night at Huntington Park in ghost-filled Columbus. If Bell is called up by the time we get to PNC Park, then the Baseball Gods are indeed smiling on us.