Ravens’ John Harbaugh on the Ropes

Must-win for Baltimore on Christmas vs. Steelers. 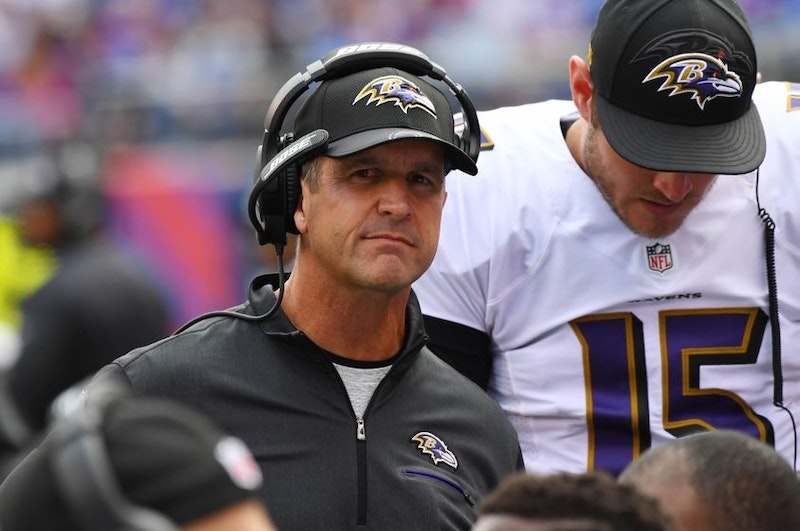 John Harbaugh and the Baltimore Ravens did their best to fumble away a victory on Sunday versus the Philadelphia Eagles. After a long pass play in the fourth quarter the Ravens called for a pass on first down that was intercepted. The play call took neither the score (Ravens were up 10 points) nor the clock (6:21 left to play) into account. The call, and subsequent turnover, were out of character for a Baltimore team that’s happily settled for field goals since the Bush administration. Harbaugh took the blame for the “worst play call in history” following the game, but did nothing to instill confidence in his offensive philosophy.

Lackluster offense has defined the Ravens. Aggressive defense, solid special teams, and snore-inducing offense have become a Baltimore tradition. The 2016 season is no different. The Ravens have already jettisoned one offensive coordinator and the Marty Mornhinweg-led squad hasn’t made anyone forget the 2007 Patriots. Harbaugh’s teams have generally featured an offense predicated on holding onto the football and being happy with three points.

The Ravens finished eighth in the league in points per game during the 2014 season when Gary Kubiak served as the team’s offensive coordinator. Kubiak’s offense was a welcome departure for a fanbase that’s forced to get excited for 50-yard field goals. When Kubiak left for Denver he took the Ravens’ offensive philosophy with him. The team’s been searching for an identity ever since.

The Ravens face a must-win game on Christmas versus the Steelers. One more loss likely means another quiet January in Baltimore. Harbaugh led the Ravens to the playoffs in each of his first five seasons but he’s on the verge of missing the postseason in three of the past four seasons. The time has come for team owner Steve Bisciotti to dictate terms of continued employment to John Harbaugh.

The Ravens have been a model of stability in both the front office and coaching staff since arriving in Baltimore. Harbaugh’s in-game decision-making draws some well-deserved criticism but he gets his team prepared to play, serves as a good front man for the organization, and seems to be respected by his players. Harbaugh shouldn’t be shown the door but he should be forced to bring on another assistant coach to lead the offense. No disrespect to Mornhinweg, but he’s not the answer. Gary Kubiak isn’t coming back to Owings Mills but I hear Norv Turner is looking for work. Regardless of who Baltimore hires to lead the offense the time has come for Biscotti to send Harbaugh on a coffee run while he has the locks changed on the offensive meeting rooms.