Ohio U cagers fall to Iona on a Ragtime Saturday afternoon. 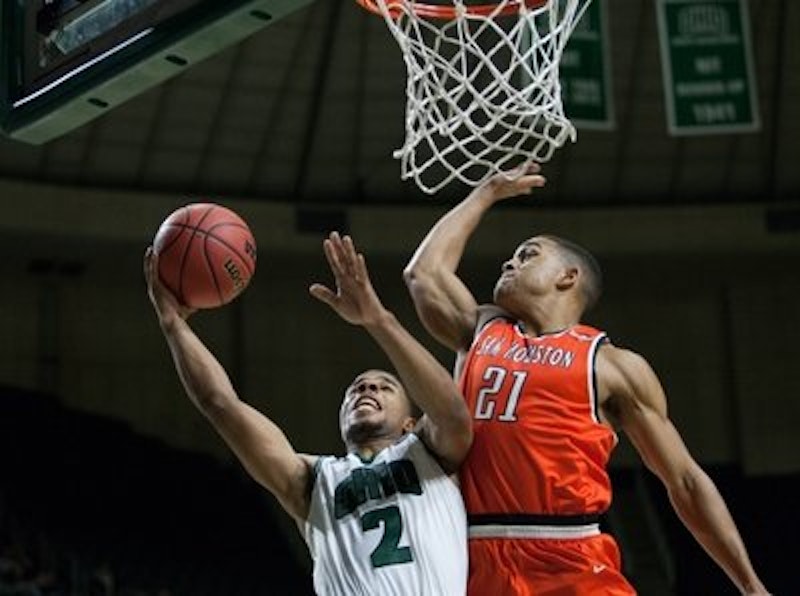 It was my first trip to New Rochelle and already I felt like Coalhouse Walker. I was simply there to see my alma mater play Division I mid-major basketball against the Iona Gaels, and I was suddenly sprayed with ketchup and almost denied a bag of popcorn by a gormless vendor. I was not driving a turn-of-the-century Ford, nor did I offend any local firemen trying to collect a “toll” from the out-of-towner.

The Ohio University Bobcats ventured from Athens, Ohio, the southwestern Ohio town where I had my first beer (a bottle of Stroh’s) as a freshman in 1982, to the bowels of E.L. Doctorow’s Ragtime Westchester County. It was the least I could do but trek the hour and half south from Rhinebeck, NY, to check out this year’s squad that will, as they have since I departed the old Rust Belt, get me through the long winter with basketball adventures, follies and a possible March Madness bid. I was hoping the Bobcats would be undefeated as they opened this campaign in strong fashion, but a loss to Marshall University’s Thundering Herd in Huntington, WV, spoiled all that the previous week. And, like my freshly laundered Carhartt trousers splattered with ketchup and my stinging hunger for popped corn briefly denied, the Bobcats would also suffer at the hands of their non-conference foes wearing the maroon and gold.

I’d just settled into my courtside aisle seat, which the Iona athletics ticket website erroneously claimed to be the last one available, when someone bounding up the stairs stepped on a ketchup packet which then burst and unloaded a spray of Heinz product over 30 percent of the right side of my body. Later, while chatting with an OU alum in the lobby, I hand a vendor $2 for a bag of popcorn in a striped bag and he took the money and just walked away, back toward the gymnasium with halftime antics going down. We had to flag him quickly to get the bag and there were laughs aplenty but it was still kind of odd. I wasn’t decked out in Hunter green Ohio gear or facepaint of any kind, so his unintentional grift lacked any obvious motivation.

The 5-1 Bobcats led most the ballgame, but were victims of their own lousy shot selection and lackluster execution in the final seven minutes of the tilt, which Iona (6-3) won 79-75 in front of a slightly-moribund Saturday afternoon “crowd.” The cramped Iona campus has a few buildings seemingly lifted from the Georgian brick sprawl in Athens, Ohio, jokingly called “Harvard on the Hocking.” Iona’s campus is skirted by houses with plantation-style front porch columns on plots of land set at odd angles like somebody bumped the Monopoly board. It’s fraught with official vehicles and overly speed-bumped mini thoroughfares. Maybe it was the pre-Christmas Saturday blahs or the weight of end-of-semester exams that brought a pall over the Hynes Athletic Center, a pathetic gym with a capacity of 3000 or so and no seats under either basket, thus robbing the room of any interactive atmosphere or student body chicanery vis-à-vis distracting the foul shooters.

The Iona “Pep Band” was an afterthought Jazz Club combo so timid the PA announcer could shut them down and the Gaels mascot looked chagrined as the musicians sat silent during most of the time outs. OU fans and alumni in attendance are more accustomed to the cacophony of the Convocation Center back in Athens, the 13,000-seat “roundhouse” which gets quite loud with a lively band and student cheering section known as the “O Zone.” Perhaps New Rochelle has a noise ordinance governing the Hynes Athletic Center area? The building has an unusual spider web of white rafters on its ceiling and two enormous video scoreboards at either end of the court looming way out of scale with the rest of the room.

Iona made the March Madness tournament last year earning the bid with a win over Monmouth in the Metro Atlantic Athletic Conference tournament final. The Gaels and Bobcats look evenly matched as they careen toward the new year transition part of their schedules. Both were picked second in their respective conferences in preseason polls, and last Saturday it was the Jordan Washington vs Anthony Campbell Big Guys in the Paint Main Event. Campbell is OU’s lumbering 6-foot-9 forward out of Cincinnati who plays with a calm, steady demeanor. Meanwhile, Iona’s Washington is a hot-headed senior out of Queens who wears his emotions all over his 6-foot-8 frame, including an Anthony Perkins’ Psycho-style grin after he performs well on the court. It was fun watching Campbell and Washington entwine arms and stuff tattooed shoulders into each other’s faces. The Gaels gave the Bobcats plenty of space in the first half and then turned on a full-court press for most of the second half. Washington had a superb game (even though he was way too jacked up after scoring with his team down 16-4), and a three-point assassin teammate from Pilsen, Czech Republic (junior Jan Svandrlik) simply couldn’t miss from beyond the arc.

My tomato-scented seat was directly behind ESPN 3 web broadcasters John Brickley and Vin Parise who were all business all the time in their charcoal suits and sturdy headsets. It was, as most mid-major NCAA basketball games tend to be, an entertaining contest of back-and-forth runs, and-one drives to the hoop and deft head-fakes by energetic point guards. Iona’s Jon Severe stepped right out of the 1970s, befitting a Brooklyn native and transfer student from Fordham. There is also UConn transfer grad student Sam Cassell Jr. bringing the ball down the court for the Gaels. Yes, he is the son of Sam Cassell Sr., the former Houston Rockets standout and current assistant coach for the L.A. Clippers.

In any case, it was good to see the Ohio lads up close. They’ve got four more non-conference battles before submerging themselves in Mid-American Conference action against the likes of the University of Akron Zips and Eastern Michigan Eagles. There will be lots of ESPN 3 coverage, but the hope on this end is to see the Bobcats on national TV next March for their 14th appearance in the Big Dance.