Another reason to hate the team from the Virginia suburbs. 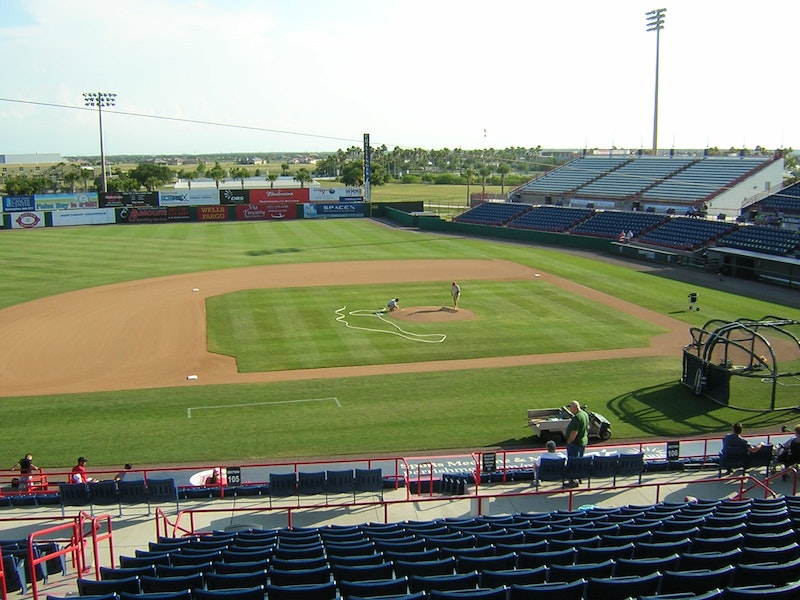 There were Brevard County sheriff cars in the distance when I realized I left my wallet in a garage 13 miles from where I was standing. I was attempting to do a walk-around of Space Coast Stadium, the former Spring Training home of the Washington Nationals situated in a planned community called Viera, FL. I like to do walk-arounds of stadiums in which you circle the entire edifice by foot, preferably the exterior walk. I consider it a Shamanistic ritual to walk around the site of a baseball campfire and glance upwards at foul poles or use stray batting practice baseballs found beyond power alley walls to fill a gris-gris satchel.

My haste to get to where no one was going meant I had to cut my mission short. The wallet held my cash and driver’s license and I suddenly felt naked. The New York plates and solo dude in a “Kenyon Baseball” t-shirt would be too easy for them to swoop in and check me for vacation beers or whatever charge they wanted to trump up. So, like the Washington Nationals, I got the hell out of there.

The Nationals did 12 Spring Trainings on this diamond in the middle of nowhere, a former ranch along I-95 45 miles due east of Orlando. The perennial NL East chokers with the big egos, payrolls, and penchant for relocating are in fact moving their Spring Training to a hoity-toity place pretentiously titled “The Ballpark of the Palm Beaches,” which they will share with the lowly Astros who are dumping their old home in traffic-choked Kissimmee. All this so they can be closer to the Cardinals, Marlins, and Mets, leaving the interior of central Florida now void of Spring Training action and therefore Balkanizing the camps on either coast of the Sunshine State. Grapefruit Leaguers apparently long for the instant gratification of Cactus League sandbaggers out in Arizona who are all a 40-minute bus ride away from each other. The Reds abandoned Florida, as did the Dodgers and Indians. As I stared past the cop cars at the flat Dali-meets-Midland, Texas horizon beyond Space Coast Stadium, I realized that not one soul will miss this team being here.

They’ve left all the signage up and their Walgreens style insignia everywhere, perhaps as a contingency if the construction crews don’t hit the March deadline down in “The Palm Beaches.” The wall of box office windows greeting me outside an Omega Man-style staff and handicap parking lot took on a Jules Verne quality with their bent microphones and circular air vents at mouth level. I checked Will Call for one ticket under “Serling, Rod” but there was no one seated at that window. The Atlantic salt air does make its way inland to Viera (which is Slovak for “faith” in honor of the land owner Andrew Duda—no relation, Mets fans). The numerous padlocks cutting off access to the bland interior of the Space Coast Stadium were rusting away. Having been inside for many games back when the nascent Marlins used the joint in the 1990s when Gary Sheffield was the draw, it ain’t worth the breaking and entering charge. The architects from the DLR Group mailed this one in back in 1994 when this ho-hum 8,100-seater opened with the hope that Viera was going to be the next big thing on Florida’s Space Coast. Including the practice fields, the facility covers a massive 74 acres and is always windy because the only windbreak in proximity is the St. John the Evangelist Catholic Community, which as of Boxing Day had itself a nice superstructure steel frame erected for a massive new church because the original one must be at least 11 years old. There is a looming and random “Casey at the Bat” statue by the ubiquitous Mark Lundeen and a Space Shuttle model on a plaza with the requisite water feature.

A series of Army Corps of Engineers-sized drainage ditches alongside the ballpark would make a walk-around very difficult, and I thought the cop cars were drawing nearer. Thankfully a man letting his dogs of their leashes on Practice Field 5 drew more interest from the police, so I had a few more minutes of browsing this soon-to-be baseball graveyard. I saw Tinker Field in Orlando in its latter days after the Twins departed, but it was part of an urban sprawl and certainly a sinkhole risk, so it’s long gone. But the demise of Space Coast Stadium, which also lost its summer minor league franchise when the Florida Fire Frogs moved to Kissimmee, will probably be a slow-burn of salt air decay. The Nationals colors still dominate the walls of the exterior which is covered with very Midwestern style aluminum siding on certain sections. Visible from the lot is the optimistically-named “Grand Slam Grill” and the various standpipes, generators and other HVAC clutter you only notice when examining abandoned ballparks.

I was hoping for picturesque squalor but all I got during my brief risky visit was Ken Burns cutaways. There was no trash blowing around or any kind or hastily-abandoned food carts or vendor detritus nor was there a crushed souvenir batting helmet stuck in the sandy soil. It has been noted in many quarters that the final Nationals Spring Training game at Viera last March as a rainout against the Marlins, and by all appearances, Viera is a very tidy community. In its relatively brief run, the place has been an Ellis Island for misfit baseball squad mistakes. Consider the Montreal Expos, sold by Jeffrey Loria back in 2002, swapped out their Jupiter, FL, training site with the “Florida” Marlins who had moved into Space Coast Stadium with much regional triumph, pomp and circumstance back when the damn thing opened in the spring of the strike year of 1994. The Expos languished for two years of active limbo before they became Washington’s seemingly 19th pro baseball franchise in the past few centuries. Meanwhile those all-encompassing “Florida” Marlins raised the big foam middle finger to the rest of the state when they built their Logan’s Run home ballpark in Little Havana and changed their named to “Miami Marlins” and the city continues its hatred of the rest of the state and vice-versa.

The closest structure to the vast practice fields at Viera, aside from the Catholic church expansion project, is a giant Exxon station with one of those flat-roof shelters made for Weather Channel hurricane footage. Every violent storm that rolls through Florida always features footage of those ridiculously too-heavy gas station pump shelters peeling away and toppling. Not far from “Stadium Parkway” in Viera is old U.S. 1, which still has freight trains running parallel to it and old school places like the Pineda Inn where Davey Johnson might’ve dropped in. Once you cross the Indian River, however, no one gives a damn about a baseball sob story out in Viera. A bar manager at the kind-of-sports tavern called The Monkey Bar in nearby Indialantic wondered what would become of that big stadium after I had asked her the same question. “Waste of space,” she said, adjusting her “Enjoy the Ride” tank top covered in images of mustaches. The beach, the surfers, the tourists and A1A drifters keep them all busy enough not to notice Spring Training baseball nerds. In a dozen years, the Nationals did very little to influence the locals. No stickers on the back bars, no autographed pictures in the seafood joints, no promotional hats on the little shavers riding their bikes through Sulphur-tinged cul-de-sacs in the Melbourne suburbs. Economic pillars such as NASA, Gannett and myriad defense contractors have all been weakened on Florida’s Space Coast. Sure, there are Elon Musk vs. Jeff Bezos rumors up in Cape Canaveral, but now we can confirm spring training baseball in east central Florida is as dead as John Glenn.