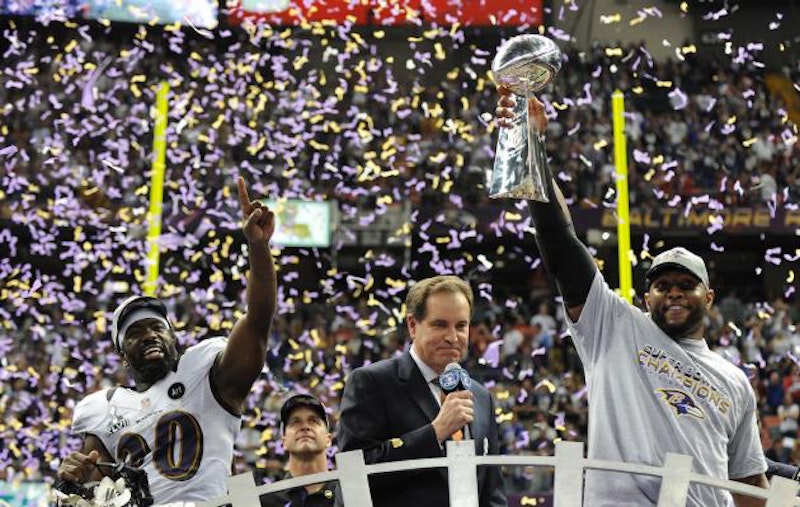 What a difference a decade makes. When the Ravens won their first Super Bowl following the 2000 season I was a listless twentysomething reveling in the post-game aftermath with a bunch of other half-in-the-tank ne’er-do-wells on the city streets of Baltimore. I watched that game at a friend’s apartment in Bolton Hill. As the final seconds ticked off the clock we took to the streets. We were hugged and high-fived by random people as we made our way down Charles St. The purple-clad throng grew as we approached the Inner Harbor. It was full-scale mayhem. I’ve never been slapped on the back, high-fived, and hugged so many times in my life. We finished the night in Fells Point as a group of a few hundred fans chanted “Fuck New York!” in the middle of Broadway.

Sunday night we watched the game at a friend’s house, with a total of eight kids in attendance. The kids mostly played in the basement and stuffed themselves full of purple cupcakes while the parents watched the game. My son would occasionally run upstairs to ask how many more points the Ravens needed to win. I had neither the time nor inclination to explain the intricacies of NFL scoring at that moment so I just told him, “One buddy. One more point.” The 34-minute power outage put a major wrinkle in our plans as we got further from bedtime, and closer to the start of a school day, we made the call to head home near the end of the third quarter. We didn’t miss much on the 10-minute drive. We whisked the kids into the house and off to bed. My son asked me if I would come up and tell him if the Ravens won the Super Bowl. “Sure buddy.” Thirty minutes later, as the confetti fell in the Superdome, I went upstairs expecting to find him still half awake. He was out cold. I tried to shake him, I jostled his hair, even tickled his belly, but nothin’ doin’. He got the good news and the score from his mom in the morning.

I watched the local news after the game with crowd shots from Federal Hill and Fells Point and fondly remembered the celebration 12 years ago. I was also glad to be home in my warm house with my wife in her T-Sizzle jersey and the kids sleeping soundly upstairs. My time for that type of celebration has long since passed.

The power outage came at a very inopportune time for the Ravens. Conspiracy theories spread across social media as the delay stretched longer and longer. Baltimore’s long-held inferiority complex came to forefront as people started to blame the league for the outage and suggested that the NFL didn’t want the Ravens to win or wanted to keep the game close to hold onto TV viewers. Baltimore still hasn’t gotten over the sting of losing to the Colts or Paul Tagliabue’s suggestion during the expansion process to “build a museum.” I’m all for a good conspiracy theory but I’m not buying this one. I’ve blamed Roger Goodell for a lot of things since he took office but I don’t think he pulled the plug on the Ravens rout. The outage did clearly change the momentum of the game but the 49ers deserve some credit for that.

Members of the Society for American Baseball Research (SABR) will no doubt insist that momentum isn’t a real factor in determining the outcome of sporting events. The problem is that the effects of momentum can’t be calculated or given a handy acronym and fed to the masses. If 36 years of watching sporting events has shown me anything it’s that momentum is real. You can feel it but you can’t plug its variables into a spreadsheet. The power outage during the Super Bowl took the momentum from the Ravens and somehow re-charged the 49ers. Whether it was because San Francisco used the time to make additional halftime adjustments, Jim Harbaugh settled QB Colin Kaepernick, or the players just realized that their season was quickly coming to an end, the 49ers squad we saw after the delay was a different team.

I’m not much for halftime shows, or commercials for that matter, but holy Beyonce! Can she just do the Super Bowl halftime show every year? And where the hell do I get one of those Beyonce holograms? Any chance Lowes carries those?

I don’t know who started this “elite” quarterback nonsense but I’d like to punch him squarely in the sack. The “elite” argument is a completely subjective waste of time with no discernible way to prove or disprove. The notion that Joe Flacco is now somehow a better quarterback simply because the Ravens’ defense had a goal line stand to win the game is absurd. Flacco has been a damn good QB for five years. His early career success is unprecedented.

Jim Harbaugh is a sore loser and kind of a jackass on the sidelines. Peter King compared the younger Harbaugh to the recently departed Earl Weaver in his Monday column on SI.com. I get the reference but there was generally a method to Weaver’s style. Jim Harbaugh just seems like a whiny brat. His team seemed to take on his personality during the first half of the game when there was an overabundance of pushing and shoving after the whistle. Jim Harbaugh has a bit of an entitlement attitude and his team seems to have taken on that trait. I get that he was upset about the no-call on the fourth down pass to Michael Crabtree but if the ref threw the flag there it would have been among the worst calls in Super Bowl history. The officiating crew didn’t call a single hold all night; to call one on the game’s pivotal play would have been a travesty. Both players were fighting for position and the ball was uncatchable. Harbaugh should also remember that his 49ers were in the Super Bowl thanks to a no-call on a pass interference on a fourth down with just seconds on the clock in the NFC Championship game.

Joe Flacco not only played with extreme confidence but exhibited confidence in his receivers. Flacco made a habit during the postseason of throwing the ball up to Anquan Boldin, Torrey Smith, and Jacoby Jones. The trio routinely made plays for their QB. The formula worked to the tune of 11 TDs, zero INTs, and a Super Bowl ring.

Jacoby Jones has to be on cloud nine. Jones had been a disappointment as a receiver for the Texans and fumbled two punt returns in Houston’s playoff loss to the Ravens last season. He came to Baltimore and provided an instant spark on special teams and a bookend deep threat to Torrey Smith. Jones, a New Orleans native, had the most memorable moments of his career on the game's biggest stage in his hometown. It doesn’t get much better than that.

Maybe the 49ers wouldn’t have dug such a huge hole for themselves if Colin Kaepernick didn’t have the playbook tattooed on his forearms. I'm all for Kaepernick's right to express himself any way he likes but he looks less like a Super Bowl quarterback and more like a guy who you'd see on Hardcore Pawn getting belligerent trying to get $100 for a CRT monitor.

Ravens cornerback Jimmy Smith has for the most part been injured or ineffective during his brief pro career but he does have a flair for the dramatic. Smith intercepted Tom Brady in last season's loss in the AFC Championship game, he pinned Denver inside the 10 yard line with a terrific tackle on a punt return a few weeks back, and he delivered a crushing hit on Crabtree jarring the ball loose during the goal line stand that essentially won the Super Bowl for the Ravens. Smith may not be a cover corner but he has a nose for the ball.

If I never hear the words "deer antler spray" again I'll be a happy man. What a snake oil style load of crap. Sports Illustrated sold some magazines with the story but if anyone really thinks that Ray Lewis returned from a torn triceps because of deer antler spray, unicorn dust, or cream of Bigfoot soup they should have their heads examined. Lewis’ quick return rightfully raised eyebrows but let's at least be honest about what he may have used to accelerate his recovery; HgH, blood spinning, and old fashioned hard work should be up for discussion.

My predictions hit. I had the Ravens winning 27-20 with Flacco as the MVP.