The Ups and Downs of Young Major League Hitters

Hitting a ball isn’t so easy. 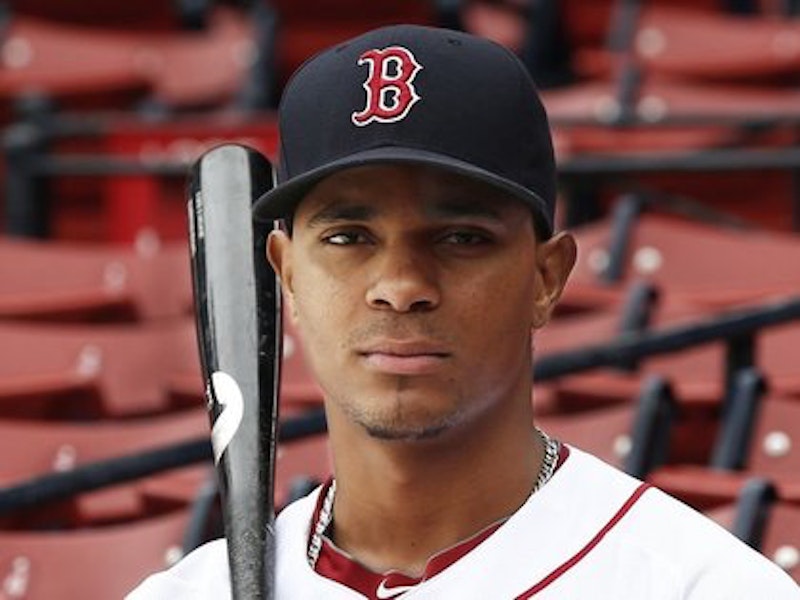 Let’s start by explaining how weak a hitter I was at 13. After a decent few years in Little League, the big diamond (and the 90-foot base-to-base infield) awaited. There was “Senior League” and “Intermediate” for the 13-to-15 year-olds. Because I was pretty good in Little League (mainly because I could run fast and every time I threw the ball I gathered up all of my adolescent frustrations and fired the ball), I was chosen to play in Senior League. If I didn’t finish my 13 year-old season as the worst player in Senior League, I was close to it. Maybe I managed a .100 batting average. Every other at-bat was a strikeout. I went into the box with zero confidence, but wiggled the bat all the same. Jittery, I’d swing early, resulting in foul balls or four-hoppers to the third-basemen. I’d bolt to first base to beat the throw, only to notice that the distance (90 feet) would prove my sprinting futile. When I did play, the coaches didn’t know where to play me, so I usually ended up in right field. I misjudged line drives, was often afraid of sharp singles, and usually under-threw the cut-off man. Let’s just say I wasn’t ready for the big diamond. It didn’t help that the growth spurt hadn’t arrived yet. So I understand, to some degree anyway, the difficulty of hitting a baseball.

As a Red Sox fan, I’ve seen both success and brutal struggles from Boston’s young bats. Xander Bogaerts represents the highs and Jackie Bradley’s miserable start to 2014 would be the lows. In the middle is Will Middlebrooks, who, like the hitters described below, is a power-hitting, strikeout-prone young player hoping to establish some level of consistency. Injuries have derailed that opportunity this year.

Now, let’s take a look at some big leaguers in the batter’s box.

Casey McGehee, Marlins: Marlins third baseman Casey McGehee came back from his time in the Japanese leagues a different hitter. Leaving Milwaukee for Miami meant fewer HRs, but to go from 23 in a season to 1? Today, McGehee loves hitting singles with men on base (.382 average, 40 of 50 hits w/runners on are singles), hates hitting all by himself (.243/.309/.301 SLG), and isn’t concerned with home runs: 1 HR, 44 RBIs. If he keeps up this pace, McGehee could finish with a 1910’s style season, amassing 100 RBIs without anywhere close to 10 HRs. He’s also the rare right-handed batter that struggles with left-handed pitching (.176/.283/.275). What are we to make of McGehee’s bizarre numbers? Something happened in Japan... we just can’t be sure what.

Mike Olt, Cubs: Through June 13, Cubs’ fading prospect Mike Olt managed only one hit in his last 34 at-bats. Olt’s batting average had fallen to embarrassing lows: .149. Is Olt the anti-McGehee? After Going 1 for 34, how did Olt bust out of the slump? With a home run, of course. Of Olt’s 23 hits, 10 have left the park. Some guys swing from their heels. If there is anything lower to the ground than the heel (the spikes?) Olt swings from there.

Of Mark Reynolds’ 43 hits, 13 are HRs. Juan Francisco of the Blue Jays gets the bronze, notching 11 HRs to 36 hits. What do Olt, Reynolds and Francisco have in common? They are all desperately hoping to stick in the majors at this point. Francisco is 26 and finds himself in a platoon-situation after a trade from Atlanta to Toronto. Olt turns 26 in August, and the sand is drifting out of his baseball hourglass.

Reynolds, now 30 and with his fifth team in Milwaukee, established himself with a 44-homer season in Arizona in 2009, but also as a 200-strikeout hitter that same year and who fell under the Mendoza Line (.198) the following season. Reynolds’ career most closely parallels that of Adam Dunn, the three-outcome-hitting king (HR-BB-K), who combined to hit 75 HRs in 2012 and 2013, while managing just 225 hits. Pitchers may as well take the mound against hitters like Reynolds and Dunn without fielders. Fans can play the strikeout-walk-homerun drinking game.

Jedd Gyorko of the Padres is a younger version of Mike Olt, with perhaps more staying power due to the fact that he can play second base and walks more. After bursting onto the MLB scene with 23 HRs, the 2B has been the least effective hitter in the majors in 2014, through 204 ABs before hitting the DL, going .162/.213/.270. A closer look at his 2013 season showed a month (July) in which he went 5-for-50 with five singles, zero walks and 16 strikeouts. There is streaky, and then there is Jedd Gyorko. The 25 year-old Gyorko is straddling that fine line between a player who might have a fine 12-year career and the more common result: the fading prospect who is destined for AAA. Here’s hoping that Gyorko figures it out. He’s from West Virginia. My dad’s family is from WV. There aren’t many mountaineers in baseball.