Prince Fielder Doesn't Give Detroit a Lock on the AL Pennant 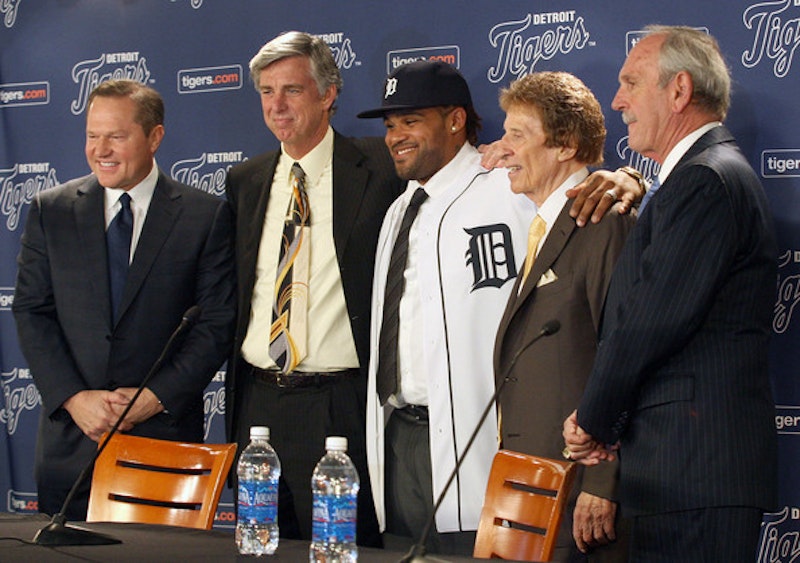 Detroit Tigers GM Dave Dombrowski was put in a curious situation last week when the team’s owner, Mike Ilitch, pushed him to sign slugger first-baseman, Prince Fielder to a nine-year, $214 million deal. Everybody knows the risks involved with signing the tub o’ lard: he’s dangerously fat with shaky genetics that suggest a physical breakdown is, if not imminent, on the horizon. That’s not the issue. Most likely, the Bengals will get four or five really productive seasons out of Fielder, and for the 82-year-old Ilitch, who presumably wants a World Series ring before he dies, it’s a good investment. The problem with the signing is that Detroit already has two first-base/DH types in Miguel Cabrera and Victor Martinez.

Martinez, who will be on the disabled list for all of 2012, has likely played his last game as a Tiger. Cabrera is slated switch corners on the field and move back to his original position, third base, where he notoriously butchered every other play. That’s not going to work out. By June, Cabrera and Fielder will serve as a first-base/DH platoon, with the latter getting the majority of the starts defensively. The 3-4-5 of Cabrera, Fielder, Martinez is tantalizing, but in no way viable. With Alex Avila as the regular catcher, V-Mart has no spot on the team.

But even with the one-two punch of Cabrera and Fielder, the Tigers are barely a Top 5 team in the AL. The Yankees, Rangers, Rays and Red Sox all have far more balanced rosters. Dombrowski may have a first place team for the next three years in the weak AL Central, but it’s doubtful he’ll take home a Series ring. Their pitching is deep enough; Justin Verlander is an absolute ace, Doug Fister a solid number two, while the promising Max Scherzer and Rick Porcello continue to develop. With at most four reliable hitters, though, their offense doesn’t stack up.

Brennan Boesch had a solid enough year, with a .283/.341/.458 slash line, but many scouts still think his swing can’t be translated into long-term major league success. Austin Jackson, once a top prospect in the Yankees farm system, hasn’t lived up to the hype. His tendency to strike out often and lack of ability to get on base at a sufficient clip aren’t good qualities for a leadoff hitter. Ryan Raburn, a mediocre fixture in Detroit’s lineup for years, has only seen his statistics decline in the last three seasons.

The playoffs are a crapshoot. Who thought that the Cardinals would win the whole thing? The Fielder contract practically guarantees Detroit a spot in October over the next few years, barring any serious injury. Though they won’t be the best team competing next season, Fielder puts them one step closer to a championship. His physical breakdown is on the horizon, but Ilitch is clearly ready to pay the price for a ring.