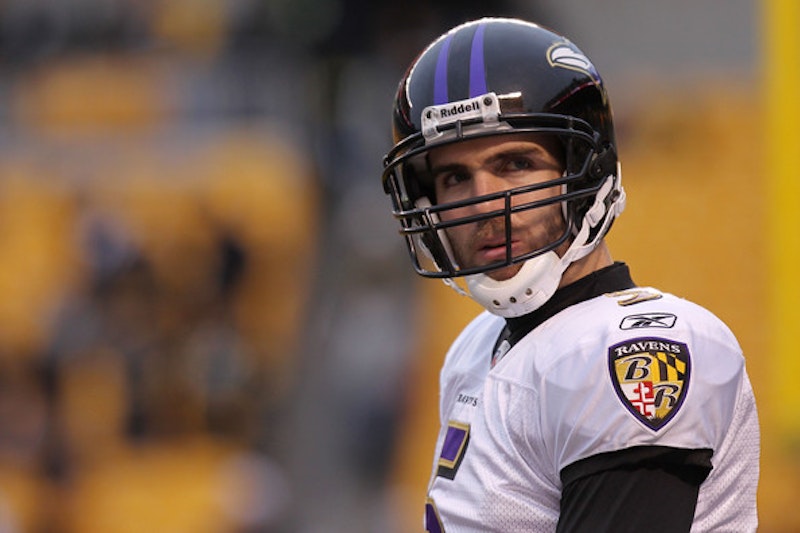 The Ravens’ emphatic win over the Steelers last Sunday was a euphoric, cathartic experience for Baltimore fans. The 35-7 stunner over their arch rivals answered a myriad of training camp questions that surrounded the team. The victory also removed the monkey from Joe Flacco's back. Despite amassing a 32-16 record as Baltimore's starting quarterback over the past three seasons, not to mention three consecutive playoff trips, critics lined up all offseason to take shots at Flacco.

Sunday's win snapped the Ravens’ six-game losing streak to the Steelers with Ben Roethlisberger under center. It also marked the first time that Flacco had defeated Big Ben in a head-to-head matchup. Two of those six loses were even more bitter since they came in the postseason and ended the Ravens' Super Bowl aspirations.

As an avid talk radio listener I am continually astounded by the general lack of satisfaction with Flacco among the Ravens' fan base. The national pundits on the pre-game shows pile on and perpetuate the myth that Flacco isn't on the same level with 2008 draft classmate Matt Ryan. After the Falcons’ latest playoff debacle and Sunday's inexcusable dismantling at the hands of the Bears it's time to halt the canonization of Matty Ice.

I'm not big on throwing around the term "elite" when it comes to NFL QBs. There are two elite quarterbacks in the league and one of them just had his second neck surgery of the summer. Drew Brees and Roethlisberger are very close, and Aaron Rodgers looks to be next in line. Flacco belongs in the next tier with guys like Phillip Rivers and Michael Vick.

The Ravens’ inability to stop Roethlisberger with the game on the line over the past three years has led to Flacco being undervalued. Couple those heartbreaking losses with the fact that the only time the Ravens receive national TV coverage is against the Steelers and it's easy to see why the national perception is that Flacco’s an average quarterback. In case anyone has forgotten the Steelers have been making quarterbacks and offensive coordinators look like chumps for years.

In 2010 Flacco threw for 3622 yards, 25 TDs and 10 INTs. Those numbers were good for a QB rating of 93.6. Flacco put up those numbers despite a disastrous week two performance against the Bengals in which he threw four interceptions and just one touchdown. On Sunday Flacco tossed three TDs and no interceptions against the Steelers. It marked the third time that Flacco has played against Pittsburgh, the NFL's top defense in 2010, in his last 15 regular season games. In those three games Flacco has throw five touchdowns and one interception, to go along with two victories. In his last 15 regular season games Flacco has thrown for 3424 yards, 26 touchdowns and just six interceptions. Those are not the numbers of an average quarterback. Take that, Matty Ice. Flacco is clearly a Top Ten NFL quarterback and anyone who says otherwise simply hasn't been watching.