I Used to Google Ronda, Now I Google Holly

Rousey is the Justin Bieber of the cage. 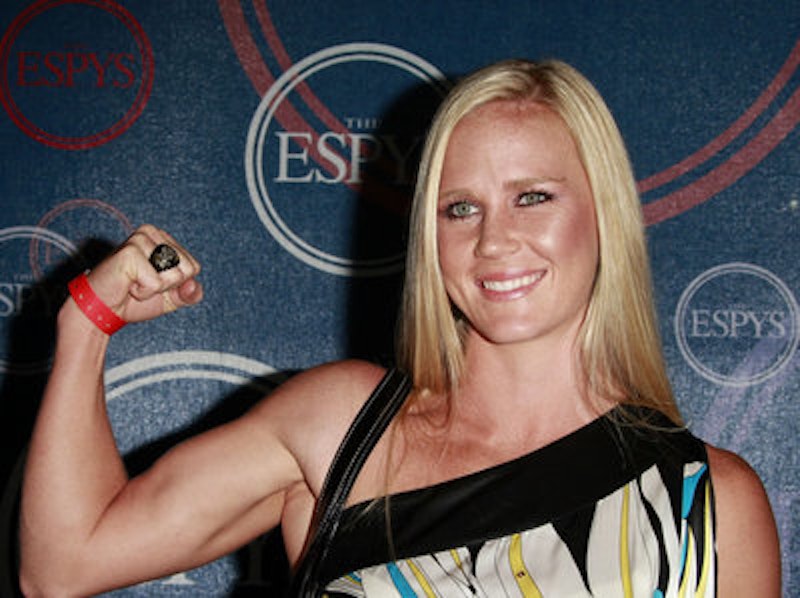 I used to love Ronda Rousey for the message she put out when refusing to entertain the idea of fighting Floyd Mayweather, stating that she never wanted to show young girls the image of a man punching a woman under any scenario. Later, I developed a distaste for Rousey because her own brand betrayed that message by printing gear with the phrase, “Don’t Be a DNB.” Initially, I would’ve bought anything Rousey was selling, but then I learned that DNB stood for “Do-Nothing-Bitch.” While the message was meant to inspire, it played right into the house hand. “Don’t Be a Bitch,” Rousey was telling us, as if there were two types of women and one of them was justifiably demeaned. Or perhaps she was telling us that there were two types of bitches, and one did nothing and one did things. This isn’t the message I want printed on the shirts of young girls. Great fighter? A qualified yes. Great role model? No.

I had the privilege of co-producing a film about UFC fighter, Jens Pulver. The privilege was more in meeting the man than in producing the film, because of the strength of character Pulver portrays in his daily life. In the movie, you can catch Pulver imploring future generations, “Do it better than I did.” I can’t imagine Rousey saying that. She may want to, but then upon reflection thinking, “Nobody can do it better than me.” There are hundreds of videos wherein she states just that, and I’d normally forgive her so long as the fighter lived up to the fight. When Holly Holm knocked out Rousey last weekend, I thought, “Thank God it wasn’t a man that did it,” and then I thought, “Thank God.”

Athletics saves a lot of us. Without them, we sometimes teeter on the edge, drifting into melancholy. One of the reasons we love a good champion is because of the way a winner bring us back to life, dangles possibility, shows us the payoff, and implores us to follow them into greatness. I know that’s what Rousey was trying to do with her DNB brand, inspire us in the ways that she knew how, but it’s unfortunate that she co-opted that particular “B” word. I’ve done it myself at times, in fits like anybody else, but without the force of a brand backing me up. Maybe, though, it’s time that we all think of ourselves as a brand, and start putting out a better message. Maybe there’s something to learn in Rousey’s failure. Jens Pulver would know what to say about this, and seems to have always known. His brand was, simply, “Driven.”

For months, like millions of other fight fans, I Googled Rousey, but she lost me when I imagined my daughter wearing one of her “Don’t Be a DNB” hoodies. I just couldn’t see it. I don’t spite Rousey for being too young, too good, or having too much, too soon. In lots of ways, she’s the Justin Bieber of the cage. My hope is that Rousey takes time to heal from her beating, and comes back with humility, not just on the outside but deep inside where those straight lefts, that left elbow to the face, and the incredible head kick are probably still shaking her. In the meantime, I’ve been Googling Holly Holm, “The Preacher’s Daughter,” for days. There’s a lot to wade through, but the good stuff is great, and clean, and makes you kind of wonder where she’s been all this time, and how she managed to show up so perfectly, right when we needed her most.