An Ambiguous Farewell to Kobe Bryant

We’ll always look back at his career with fondness. 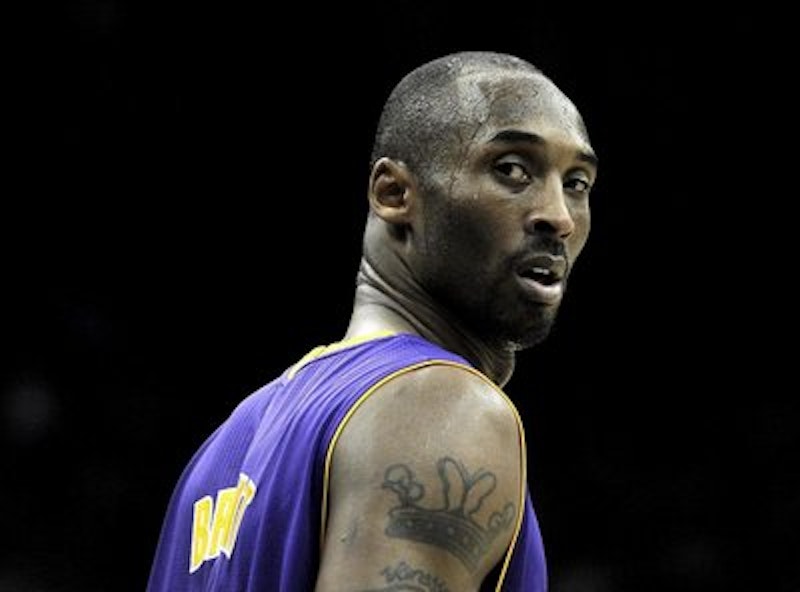 Watching a once-great athlete come to the end of the line is always difficult. Joe Namath could barely walk, Muhammad Ali became a human punching bag and Willie Mays resembled an out-of-shape veteran at an old-timers game. Even Michael Jordan looked old and fat when he retired from the Washington Wizards.

Kobe Bryant is dying a basketball death before our eyes. He’s lost the ability to jump, he can’t shoot and stopped playing defense several years ago. In the past few years he’s torn an Achilles tendon, fractured his knee, sprained his shoulder and had multiple surgeries on multiple body parts. Bryant’s days in the limelight are coming to an end and the spectacle is not pretty.

Bryant is an enigma. He’s the most popular basketball player since Michael Jordan. But he’s also brash and arrogant, the only sports superstar in memory to bestow himself with a nickname (“Black Mamba”). His basketball genius is undeniable, yet he’s fostered a me-first ethos that helped break apart the greatest sports tandem in history. Like Derek Jeter with the Yankees, Bryant is going out in a blaze of blah.

Bryant’s relationship with Lakers fans is complicated. We’re grateful he’s brought the city five NBA championships. But we’re also tormented by the question of What If? What if Bryant and Shaquille O’Neal had stayed together? How many championships would the Lakers have won if the two best basketball players since Jordan had not split apart due to ego, arrogance and hubris?

Bryant patterned himself after Jordan. He walked like Jordan, talked like Jordan and copied Jordan’s moves. He played under Jordan’s coach Phil Jackson and helped the Lakers win three straight championships, something not achieved since Jordan. Like Tiger Woods who chased the records of Jack Nicklaus, Bryant was obsessed with surpassing the legend of Michael Jordan.

This was Bryant’s great error of judgment. Lakers fans couldn’t care less about Jordan. To us, the Holy Grail of basketball is Magic Johnson. Johnson played with a smile, made his teammates better and was the embodiment of unselfish team play. Bryant, for all his greatness, is selfish, egocentric and plays with a scowl. When Bryant was battling sexual assault allegations in 2004, like many Lakers fans, I defended him. The woman was probably a “gold digger,” I argued. People are always trying to take celebrities down. Who knows what happened behind closed doors?

I watched in admiration as Bryant flew back and forth from a Colorado courtroom to a basketball arena and routinely scored 30 points a night. How was he able to compartmentalize his life so effectively? Somehow he continued to display basketball excellence while his world was on the verge of collapse.

After the charges were dropped against him, I quickly forgave him. What I couldn’t forgive was his performance in the 2004 finals. Down two games to one against the Pistons, the Lakers played a crucial Game 4 in Detroit. O’Neal started the game on fire, pounding the Pistons down low and dominating the paint. The Lakers were about to tie the series. All they had to do was continue feeding O’Neal. But midway through the game, Bryant changed the game plan. He stopped passing the ball inside. He took low-percentage jumpers despite being double-teamed and Detroit converted long misses into easy layups. O’Neal became an afterthought and the Lakers lost the series.

Bryant’s impetus was clear. He was tired of watching O’Neal get the headlines and was willing to risk losing the championship in order to be the alpha dog. O’Neal later compared Bryant to Sonny in The Godfather, saying he was someone “who will do whatever it takes to be the man.” After the season, the Lakers kowtowed to Bryant’s wishes. O’Neal was traded and the Lakers formally became Bryant’s team.

The post-O’Neal years were filled with individual Bryant greatness. He led the NBA in scoring in 2005 and scored 81 points in a game in 2006, the second highest total since Wilt Chamberlain. In 2007, he was voted MVP. O’Neal’s absence allowed Bryant to showcase his individual game. But the team was a mess. Basketball purists criticized Bryant for his selfish play. Even his old coach Phil Jackson called him “un-coachable.”  In the 2006 playoffs, Bryant was upset at claims that he shot too much. During the deciding Game 7 against Phoenix, he took only three shots in the second half. It was clear he was trying to teach team management a lesson. The Lakers lost and the timing and manner of his personal boycott came off as selfish and juvenile.

The following year Bryant demanded to be traded from the Lakers. He was angry that an insider claimed he was responsible for O’Neal’s departure even though everyone knew it was true. He was videotaped in a restaurant parking lot disparaging the Lakers’ young center Andrew Bynum.

Then Bryant once again demonstrated his greatness. Early in the season he suffered a torn ligament to a finger on his shooting hand. Surely surgery would be required and he’d miss the entire season. Instead, Bryant opted to delay surgery and continue playing, despite the intense pain. He willed himself beyond the injury and after the Lakers traded for Pau Gasol, they returned to the championship, losing to the hated Boston Celtics.

The next two years were epic for the Lakers. They won back-to-back championships, largely on the shoulders of Bryant’s great play. In 2009, he made six buzzer-beating game winning shots, a record that still stands. Even with new and ongoing injuries, he made the miraculous seem ordinary. He was universally acknowledged as the greatest basketball player in the world.

Bryant’s great gift to Lakers fans came in 2008 when the team defeated the Boston Celtics for the championship. Though he shot just six of 24 in Game 7, he corralled 15 rebounds and scored 10 points in the final quarter. The championship was his fifth, equaling Magic Johnson. Los Angeles bathed Bryant in champagne and adulation but he fell short of Johnson in several meaningful ways. Bryant earned our admiration and gratitude, but not our love. We respect him as an athlete but not as an individual.

As Bryant battles through ongoing injuries in his final season, Lakers fans remain conflicted. His personality has overpowered the team and the Lakers are caught in a psychic limbo until he retires. Bryant came to the NBA as a 17-year-old prodigy and we all watched as he grew into a superstar. We’ll always look back at his career with fondness. But it’s time for Kobe to move on.