Even with nothing going on, Las Vegas can’t stop making headlines. 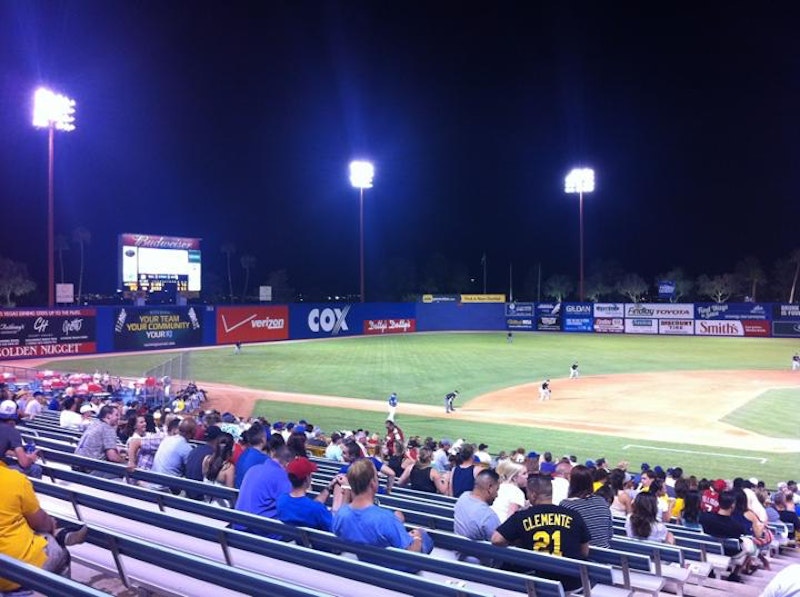 Maybe it was the death of Don Rickles, maybe it was the announcement the Raiders were moving from Oakland, maybe it was the arrival of an NHL franchise next season, maybe it was the NFL players appearing at a casino for an arm wrestling event that got all of them in hot water. Maybe. What do I know? I’d never been to Vegas before. Friends advised against it, but the Albany airport talked me into it with a direct flight. So off I went, in honor of the pure sport of baseball which will never be sullied by dirty gamblers. I went to Las Vegas to see minor league baseball (and play roulette using my system of retired Pirates jersey numbers). It was the home opener of the New York Mets AAA franchise called the Las Vegas 51s. And it was the worst triple-A baseball game I’ve ever seen. The Mets, it should be noted, owe me some comps, as they say in Vegas.

The score-line was a Raiders-like 21-6 win for the space alien honorees over the visiting Fresno Grizzlies, the AAA affiliate of the now-vaunted Houston Astros. If the pitching on display by Fresno has any indication on the future of the Houston MLB team, then they should just relocate to Jonestown, Guyana, right now and lie down in the jungle and rot away.

Yes, the Mets have two studs at Las Vegas. Shortstop Amed Rosario is pretty amazing and actually played the entire length of this opening night blowout. Dominic Smith has certain Mo Vaughn qualities at first base and hammered one out of Cashman Field just for show, apparently. The ballpark should be called Cashman Yard, as in prison yard. It’s near the old part of Las Vegas featuring the Fremont Street dinosaur casinos. It has military installation style light stanchions, and an enormously high back wall looming over a single tier of 1980s box seats, and an outfield wall about 20 feet high all the way from foul pole to foul pole. There were plenty of empty seats for the 51s home opener, and the only relics from the Mets past seemed to be a grumpy Frank Viola checking in as pitching coach.

Sitting in the fourth row on the first-base side I was reminded of my 1987 visit to the West Virginia State Penitentiary in Moundsville. It was a press tour to show off “renovations” and repairs done following a pretty major riot at the gothic castle-like facility that looks like something Jack Kirby would draw up for Marvel Comics. The giant walled behemoth shared a neighborhood in Moundsville with rows of clapboard houses with small lawns. Above the massive main door was the ironic state motto: “Mountaineers Are Always Free.” Tell that to the seniors who were inside doing life for some gas station robbery gone awry in the 1950s.

It was a pleasant enough evening in the desert, but the high walls of Cashman Field give you a feeling of confinement. I also have a problem with the glib naming of a AAA franchise after Area 51, a classified section of an Air Force base outside Nevada. The commercializing of UFOs and aliens possibly kept at the facility should also be called into question. We demand answers! Was there a Roswell crash and were the black ops researchers studying extraterrestrials at the site? The 51s have been the Mets entrant in the Pacific Coast League since 2013, but the Las Vegas franchise has been a super-whore of the minor leagues for decades, with 11 different MLB squads calling it a AAA home since 1961. The souvenir cup has the traditional alien face (slightly resembling former Pirates outfielder Jason Bay) and a chain-link fence motif throughout. What kind of message is being sent to local Vegas kids who all want to be like local baseball automatons Bryce Harper and Kris Bryant? At least we got to see a submariner on the mound in the form of 28-year-old former Brewer Ben Rowen. Former Mets backstop Kevin Plawecki also looked comfortable plying his trade. By the seventh inning or so Fresno had an outfielder on the mound and batting practice was on for Las Vegas. Strange that Fresno skipper Tony DeFrancesco, the old Seton Hall Pirate, would have to act in such bizarre fashion. Perhaps he had been abducted and probed while on the way to the ballpark? These are legitimate questions.

I also wonder why the Mets have their AAA so far away from Queens, why they use the DH at the AAA level. None of the bottle blondes in my section wearing fresh Raiders gear could tell me. Nor could the lazy bartenders in the sportsbook at the Cosmopolitan Hotel & Casino (should I have to wait an entire inning of Indians-White Sox to get a damn Stella?).

The Las Vegas Sun had just run a field guide on new food concessions at Cashman Field and lines for the two main stands were the longest I’ve ever seen at a ballgame and that includes 1996 Yankee Stadium post-season disasters hosted by Aramark with the hand-torn tinfoil lids for the sodas. The décor of the park was rather bland for being a Vegas “attraction” and the usual minor league promotions between innings were miserly distributed. Some fans down front were intense baseball-wise. A guy to my right in an authentic Mexican League jersey was applauding the 51s after each gap shot. When Rosario collected another RBI, the man stood and cheered and I noticed he was missing his right hand, using his stump to make more noise than anyone in my section. The grounds crew had a somber pregame distribution of dirt concocted as an infield hybrid surface by a young grounds crew chief from Sacramento who passed away in the offseason. There was a heavyweight couple who completed a marriage proposal successfully in the sixth inning. At least the lighting was better than the crappy flashlights they use at Wrigley. Every time I watch a Cubs night game I wonder how they get away with deep shadows on the back of the pitcher’s mound.

Since Vegas is an unwalkable city thanks to all the highway abutments, pedestrian bridges and consumerist atriums blockading you into casino zones, lots of taxis were used. Almost every driver thought Vegas was going to “take off” once the Raiders and the NHL Golden Knights arrive. “MLB will see how well they do and want to come here to,” said a scattered and sun-blasted Giants fan driver. “They’re talking about a pro team out in Red Rocks, which would be awesome.” Stick to the garlic fries, stoner, I thought to myself. One bellhop fellow said he’d been waiting his whole life for a pro team here. “17 years isn’t that long,” I said as I boarded a cab bound for Circus Circus. Another cabbie told me “You better buy your home now because it is all going to go up” once the pro leagues drop their trousers in Vegas.

On the cab ride to Cashman Field, the taxi guy was of course a David Berkowitz type from Staten Island. I asked him about Rickles. “Did they dim the lights on the strip, or do they not do that here?” I asked. “Oh. That’s what that was for. I thought it was for Earth Day, though,” he said.  Rickles would have had a field day with that one.