Not a lot of potential superstars, but some solid players. 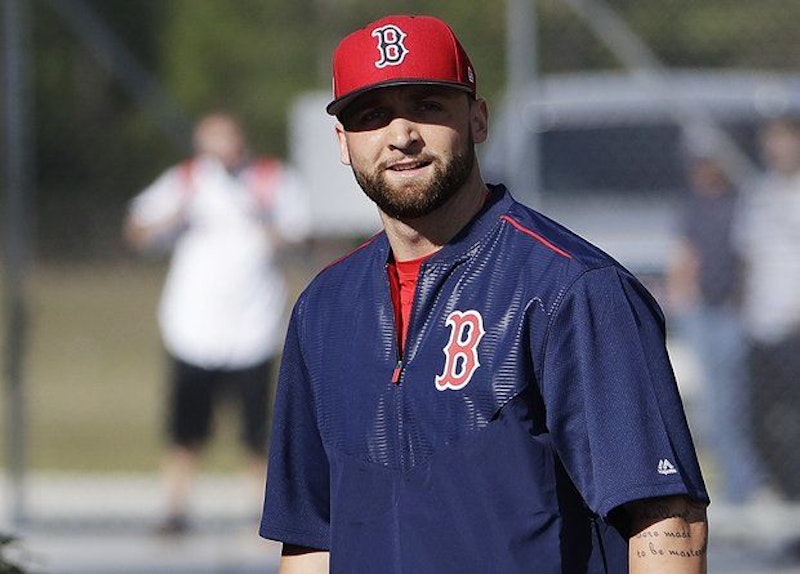 Health is never a guarantee for any sports team, so when a top-heavy team like the Boston Red Sox has multiple former All-Stars on the Disabled List (Steven Wright, David Price, Brock Holt), their depth will be tested. On top of that, teams occasionally look to their farm clubs for potential upgrades over their active roster, especially when it comes to top prospects rising and veterans falling. On May 5, the Red Sox had eight men on their DL, already putting their depth on trial a month into the season. And with MLB shortening the 15-day DL to 10 days, stints on it are more likely, adding value to depth players and Triple-A clubs. In Boston’s case, their Triple-A affiliate, the Pawtucket Red Sox, might not pop out, but maybe the strength is not shoddy after all.

Experienced Bullpen: The club has half as many 2013 World Series champs as the big league club (Dustin Pedroia, Xander Bogaerts) with reliever Brandon Workman finally healthy and trying to build his fastball velocity back up to what it was: sitting comfortably at 93-94 mph prior to Tommy John Surgery. Now Workman, who fired 8.2 scoreless innings in the 2013 postseason, struggles to hit 90 mph, which made him hittable during his May 4 long relief appearance in Boston.

Since baseball is a weird numbers game, the team’s primary left-handed reliever from last year (3-2, 3.25 ERA in 54 outings), Robbie Ross Jr., is now their primary depth guy. Ross spent time on the DL with the flu to start the year, which gave left-handed specialist Robby Scott—who pitched for the PawSox in 2015 and 2016—time to impress Red Sox manager John Farrell. Since teams like to keep as much depth around as possible, the team decided against designating Fernando Abad for assignment despite that ugly 6.39 ERA in his 18 outings with the Red Sox last season. This one just seems like such a weird scenario that it’s hard to imagine Ross in a PawSox uniform for long.

In Case of an Emergency: Righty side-armer Noe Ramirez allowed one run in his first five PawSox outings this year; he provides the Red Sox with an emergency arm. His stuff underwhelms in the majors despite excelling against Triple-A competition, making him rather ineffective against big league righties (.282 batting average against, 7 home runs, .941 OPS in 85 at-bats). 6-foot-7 righty Kyle Martin, who is also on the 40-man roster, tops out at 96 mph and could earn a shot at some point this season as a replacement if he can emulate what he did last season (3-4, 3.38 ERA, 78 strikeouts in 66.2 innings), although there may be younger relievers in the organization who the Red Sox are more interested in watching.

Nearly Big Leaguers: While they are not on the 40-man roster, Edgar Olmos and Chandler Shepherd competed for the final left-handed and right-handed jobs in the Red Sox bullpen this spring. While their names might not come up in the regular season, Shepherd has swing-and-miss stuff (16 strikeouts, 9.1 innings pitched) and Olmos, who had a good Spring Training (for whatever that’s worth) has gotten lefties out in a small big league sampling (4-for-19 with a .602 OPS against him in 11 career games). On the downside, Shepherd’s command is spotty and he’s prone to giving up hard contact while Olmos’ effectiveness against righties is suspect.

Sixth Starter?: Before the season started, the Red Sox starting pitching depth looked strong, even after they dealt 10-year veteran Clay Buchholz. Eduardo Rodriguez was supposed to start the year in Pawtucket as the team’s primary depth starter. That would’ve been a nice commodity, but injuries happen—David Price and Steven Wright—which, for some reason, also gave Kyle Kendrick a shot to start despite allowing seven home runs in his first four starts for the PawSox this season. Since they will need to DFA him whenever his time with the big league club is up, the team’s next spot starter would most likely come from the Triple-A team. And truthfully, the Red Sox don’t really have any top pitching prospects in the upper minors. Well, lefties Brian Johnson and Henry Owens used to be top prospects, and they are on the 40-man roster.

It would take a few hundred words to list all the hardships Johnson has suffered in his pro career but simply put, he’s likely their next man up. He works at a quick tempo and throws more strikes than Owens, which is not saying much, but he missed the last couple months of 2015 with an elbow injury and his 2016 was essentially a lost cause due to anxiety. He’s more of an unknown than Owens at this point, which might make him worth a shot.

There’s not much to say about Owens at this point. His command is poor (18 walks in 26.2 Triple-A innings this season), his velocity is low (about 88-90 mph), and there’s not much reason to believe he is any better this year. But hey, he’s a former first-round draft choice and the guy has options left.

Speaking of options, the Red Sox took an unconventional route and bought 28-year-old Hector Velazquez (1-0, 1.23 ERA in 22 innings/four starts for the PawSox) from a Mexican League team in February despite his low ceiling. Again though, the guy has three option years remaining, throws strikes, and is right-handed. Nothing really stands out in his repertoire, but he can hit his spots, which is what the Red Sox like about Kyle Kendrick and liked about Sean O’Sullivan last year—except Velazquez has been more effective than those two were in Pawtucket. One also must wonder if this deal will set a precedent that leads the team to sign mature and advanced foreign players to bolster their team’s depth.

Plus, Roenis Elias will be healthy soon enough since his locker reappeared in the PawSox clubhouse. He went 15-20 with a 3.97 ERA in 51 outings (49 starts) for the Seattle Mariners from 2014-2015, pitching half his games at the pitcher’s haven Safeco Park. Last year was disastrous, but if he regains his old form he’s not a bad depth choice.

Offensive Woes: Offensively as a team, the PawSox just aren’t hitting well this season; they compiled a .239 batting average and .677 team OPS through 26 games. But that doesn’t mean the entire lineup is a lost cause. After all, their catcher, Blake Swihart, who is currently on the DL (swollen finger), got the start on Opening Day for the Red Sox last season and was their primary catcher for most of 2015. His defense has improved slightly this season and he’s gunned down six of the 13 men who’ve tried stealing off him. Thanks to an 0-for-20 skid in late April—in part due to a stretch of rain delays and off days—his numbers at the plate are not great. Even so, he’s a lifetime .271 hitter with a .328 on-base percentage and .714 OPS in 103 career MLB games. His backup, Dan Butler, who made seven appearances for the Red Sox in 2014, is regarded as a strong receiver and provides the big league club with emergency depth behind the plate.

King of Spring Training: First baseman Sam Travis might be the team’s lone hitting “prospect.” Many Red Sox fans are familiar with Travis for his spring training dominance (.378 batting average, five home runs in 44 spring games over the past three seasons), which leads them to wonder if he could be the next Red Sox first baseman. Looking at his game, Travis’ bat is more advanced than his glove, although he has improved defensively from last year. He got off to a slow start, statistically, at the plate, but Travis has hit about .300 at every minor league level so far, so hopes are still high for the former second rounder, even if he’s not MLB-ready just yet.

Outfield Depth: With their eight-figure salaries, it would be hard to imagine Rusney Castillo or Allen Craig stepping foot in the Fenway clubhouse this season. In Craig’s case it’s easier because he’s not hitting particularly well and is essentially the PawSox DH. The issue with Castillo is mostly financial and being blocked by younger and more talented players, not so much an indication of the way he is playing. Regardless of what he does, he’s most likely stuck in the 401 area code.

Non-Financially Disastrous Outfield Depth: If the Red Sox do need an outfielder though, they’ll probably look to Steve Selsky, who was on the team’s Opening Day roster this year. The former Cincinnati Red is 9-for-26 with a pair of home runs in his seven games for the PawSox. While he might not have the highest ceiling, the righty, who has decent power, should at least provide the team with some corner depth. If he can improve his approach at the plate, there’s a chance Bryce Brentz, a lifetime .287 hitter with a .311 on-base percentage and .690 OPS in 34 big league games, could do the same, although he is struggling in the early going.

New to Triple-A this season, 25-year-old Aneury Tavarez is a lesser-known name fans should remember. The Baltimore Orioles selected him in the 2016 Rule 5 Draft and despite his .292 batting average, .382 on-base percentage, .778 OPS and eight steals in nine attempts in 29 spring games, he didn’t crack the big league club, so the Orioles returned him to Boston. He was dominant in Double-A earlier this year and last year and projects as an MLB bench player. Young outfielders might not be what the Red Sox need, but there was no real downside to the Red Sox bringing him back into the organization.

Defensive Specialist: Despite being a sub-.200 hitter in Triple-A, Deven Marrero continues to be a player the Red Sox turn to for his slick defense at second base, third base, and shortstop. But when you can’t hit .200 in the minors, the chances of sticking around in the big leagues as defensive replacement and pinch-runner are slim but useful come roster expansion time in September.

Dark Horse: 27-year-old Jantzen Witte is a wildcard name worth noting for his versatility, playing first, second, and third base this season. Prior to 2017, he was primarily a corner infielder and not the PawSox’s top hitter either. Through 22 games, he is hitting .302 with a .429 on-base percentage. Not the flashiest prospect, but he probably wouldn’t be playing many positions if the Red Sox did not plan on using him at some point.

Next Big Thing?: Outside of Pawtucket, Portland Sea Dogs (Red Sox Double-A affiliate) third baseman Rafael Devers’ name is being thrown around to potentially mend the black hole the Red Sox call third base. Albeit Devers, who is the team’s No. 1 prospect according to several prospect lists, owned a .333 batting average with five home runs and a .956 OPS in 20 games for the Sea Dogs while playing adequate defense. But he is only 20 years old and doesn’t have the best plate discipline. Even so, giving him a chance late in the year would not be unprecedented. See: Andrew Benintendi and Yoan Moncada last season.

Two More: Aside from Devers, Sea Dogs relievers Austin Maddox and Jamie Callahan are worth highlighting. The duo, along with Ben Taylor and Chandler Shepherd competed for the final spot in the Red Sox bullpen at the end of Spring Training. Callahan, 22, has a 1.38 ERA and in 10 outings for the Sea Dogs this season; in those 13 innings, he has struck out 20 and walked none. Maddox, 25, doesn’t have quite the same ceiling as Callahan and has allowed two runs in 11 innings (1.67 ERA) for the Sea Dogs thus far.

Outside Chance: There’s also a (highly unlikely) chance the Red Sox could garner a little more pitching depth back into their organization if the Minnesota Twins return Los Angeles Angels 2016 Rule 5 Draft pick Justin Haley to the Red Sox. Haley pitched well for the PawSox last season (8-6, 3.59 ERA, 67 strikeouts in 15 outings) and if the Twins don’t want him on their MLB roster or DL, then the Red Sox would have the chance to land him back in their organization.