Cosmic Pessimism and the Oakland Raiders

The team's move to Vegas is just the latest heartbreak. 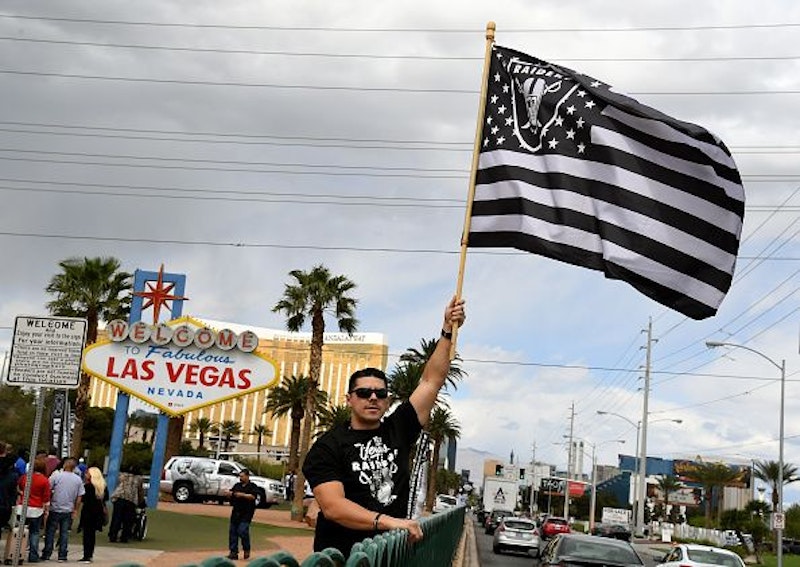 The National Football League is a cold place. And not just the games held at Lambeau Field. I’m talking about a metaphysical paradigm in which the bad guys thrive, the good guys fizzle, and failed truths are subsumed by the purity of total conflict. Football is a sport, and all sports are a cultural displacement for the relationship between fate and war. As Cormac McCarthy’s judge explains in Blood Meridian:

Games of sport involve the skill and strength of the opponents and the humiliation of defeat and the pride of victory are in themselves sufficient stake because they inhere in the worth of the principals and define them. But trial of chance or trial of worth all games aspire to the condition of war . . . It is the testing of one’s will and the will of another within that larger will which because it binds them is therefore forced to select. War is the ultimate game because war is at last a forcing of the unity of existence. War is god.

And so perhaps it’s no wonder that in many parts of God-fearing America, football is considered a religion, religion is viewed as a basis for war, and war is broadcast on the same channels as football. They’re all part of “that larger will” that McCarthy’s judge represents—the unseen and indifferent will of a frozen, hostile universe.

We see darkness in the NFL all the time. Last February, when the insidious Patriots snatched victory back from the Falcons in a harrowing second-half comeback, the political metaphor was unavoidable. We hardly even needed the connections between Donald Trump and the Patriots to understand that we had just watched evil win.

That comparison between the Super Bowl and the presidential election may have been many things—too cute, too easy, and yet another example of mistaking pop for politics—but it was nonetheless a striking moment of mass despair. It was another fine lesson in disappointment.

For me, a lifetime spent as an Oakland Raiders fan has taught me the cold rhythms of pessimism. The cynicism, the tedious cycles of error, the guilty search for silver linings, the agony of smothered hope, and even the perverted pride we excavate from marginalization, all of that I’ve come to associate directly with the black-and-silver.

From Rich Gannon’s implosion in Super Bowl XXXVII, to JaMarcus Russell’s 2010 arrest for possession of codeine syrup, high-profile humiliation has been standard operating procedure for Raider Nation. After Bill Callahan, we went through seven head coaches—and who even knows how many promising quarterbacks (remember Jason Campbell?)—in 10 years. Thirteen seasons passed before we had a winning record again.

Things changed last year. Under Jack Del Rio, a young, talented, and thoroughly inspired Raiders team not only achieved a winning record, but even went to the playoffs. Derek Carr’s catastrophic late-season injury was a heartbreak, but one that left us feeling undeniably hopeful. The future wasn’t secured yet, but it couldn’t look brighter.

And now the move to Las Vegas makes everything feel horrible again.

I don’t live in Oakland, so I can’t mourn from the hometown perspective. But in the symbolic register, I’m forced once again to see this as an example of the powerful grinding the weak into dust.

One can compare the two cities. Oakland has a lower median income and a higher percentage of people in poverty than Las Vegas. Oakland is also more racially diverse than Las Vegas. The move will have a negative effect on Oakland’s local economy, with low-wage jobs disappearing and a destabilizing crater opening beneath the abandoned stadium space. So on a cursory level, the Raiders’ move seems like another dramatic example of resources being drained from the downtrodden and appropriated by the extravagant.

Meanwhile, the metonymic associations between Las Vegas and Trump are disturbing. Trump Taj Mahal was technically located in Atlantic City, but the gambling semiotics run deeper than geography: the gaudiness, shallow values, phony exterior, hollow aspiration, fraudulent stakes, brutal exploitation of hope and human frailty. And even more broadly, Trump is linked to the gambling mecca through a shared connection to the risk fetish, which informs mainstream neoliberal economics as much as it does Trump’s reputation as a serial bankrupt.

The contemporary philosopher Eugene Thacker has defined pessimism as “the result of a confusion between the world and a statement about the world.” For the next couple of years, as the Raiders play as lame ducks in Oakland, Thacker’s pessimism is precisely the phenomenon that will arise when saying, “I am a Raiders fan.” The statement no longer has an intelligible relationship to the reality I know, the reality I trust.

For Thacker, the ultimate form of pessimism is what he calls cosmic pessimism, which exceeds the negativity of both assessing the world as bad and rejecting the world for being bad. Cosmic pessimism goes further, plummeting into the dark pointlessness of both the moral judgment and the metaphysical claim. “Cosmic pessimism is a strange mysticism of the world-without-us, a hermeticism of the abyss, a noumenal occultism.” Its register lies beyond the thought of obliteration. It’s “the impossible thought of extinction, with not even a single human being to think the absence of all human beings, no thought to think the negation of all thought.”

All of this horror appears in connection with the Raiders at precisely the moment that they were supposed to be ascendant, glorious, vindicated. But rather than justifying our suffering, the Vegas move is pulling us lower, down to an encounter with nothingness. After losing so badly for so many years, we’re now faced with the possibility of an even worse fate: treachery, dislocation, and the threat of total annihilation. At least one commentator has floated the idea of abandoning the Raiders name in the move to Vegas. Although that doesn’t appear to be happening, I can’t escape the feeling that the Raiders—as we know them—have already ceased to exist.