Orioles Run Out Of Places To Hide Pedro Strop

The struggling reliever is a black hole in O’s bullpen. 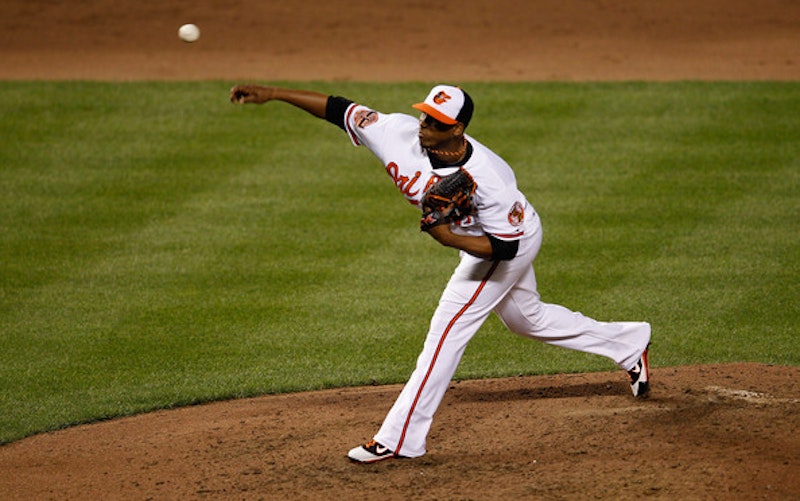 The Baltimore Orioles made the playoffs last season despite the near season-long presence of the ineffective Kevin Gregg in the bullpen. Gregg signed with Baltimore as a free agent prior to the start of the 2011 season and delivered nothing but headshakes and white knuckles in his two seasons with the O’s. The veteran right-hander walked 40 batters in less than 60 innings, elicited groans from Baltimore's disenfranchised fans at the mere mention of his name, and lost his closing job to Jim Johnson by September of 2011. Gregg, aptly nicknamed Captain Chaos, was so bad in the early part of the 2012 season that Buck Showalter treated him like a Rule 5 draft pick, using him for multiple inning stints in blowouts. Gregg was finally released in September when his two-year $10 million contract had nearly run its course.

Much like Gregg, the ongoing struggles of reliever Pedro Strop has left Showalter in a difficult position. This time last season Strop was dominating the eighth inning and serving as the primary setup man for Johnson. Strop hit a wall in late August when his control and effectiveness took a turn for the worse. He’s a relatively inexperienced hurler after spending much of his minor league career as an infielder in the Texas Rangers’ farm system before shifting to the mound. The hope in Spring Training was that Strop simply tired in his first full season of big league duty and would be ready to go in 2013. His performance this season has dashed those hopes.

The O’s don't need Strop to be as dominant as he was in the early stages of 2012. Tommy Hunter has filled those shoes quite nicely. Baltimore simply needs Strop to be a dependable middle reliever who won't mess his pants and walk the ballpark each time he takes the mound. There's nothing about Strop's 2013 performance to suggest that he's ready to fill such a role.

The Orioles took the creative step of placing Strop on the 15-day DL a few weeks ago with what was classified as a "lower back strain," although “bruised ego” would’ve been more believable. He was replaced in the bullpen by professional strike-thrower Steve Johnson. Unfortunately Johnson was lost to an oblique strain last week, an injury that happened to coincide with Strop's activation from the DL. The Orioles rushed Strop back to the Major League roster without the benefit of an extended minor league rehab assignment, which completely defeated the purpose of placing him on the DL.

The lost pitcher was back on the mound at Camden Yards on Wednesday afternoon. He quickly dashed Baltimore’s hopes of victory by allowing four runs on three hits and a walk in just 1/3 of an inning. Strop also allowed two inherited runners to score, ruining a solid effort from starter Jason Hammel and parking a dark cloud over an otherwise sunny afternoon. The debacle ballooned Strop’s ERA to 7.58. He’s walked 15 batters in 19 innings this season and has now walked 77 batters in 125 innings in his career.

The Orioles have boxed themselves into a corner with Strop. The presence of Rule 5 draft pick T.J. McFarland on the Major League roster robs Showalter of the opportunity to hide Strop a la Kevin Gregg. Strop’s lack of options eliminates the possibility of sending him to the minor leagues to work on his control without first passing him through waivers. Showalter either needs to trust McFarland in higher leverage situations or cut ties with Strop. McFarland has flashed promise but his appearances have been few and far between. There's simply not enough room in a contender's bullpen to hide a Rule 5 rookie and a struggling fire-baller who is out of options. If the Orioles think McFarland can be a key contributor in the future then the future might have to start today. Perhaps Strop’s “lower back strain” was tweaked in Wednesday’s debacle. A return trip to the DL followed by an extended rehab assignment may be Strop’s only chance to remain with the Orioles.