It's No Longer Safe To Root For the Orioles

At least if you’re a Red Sox fan taking in games at Camden Yards. 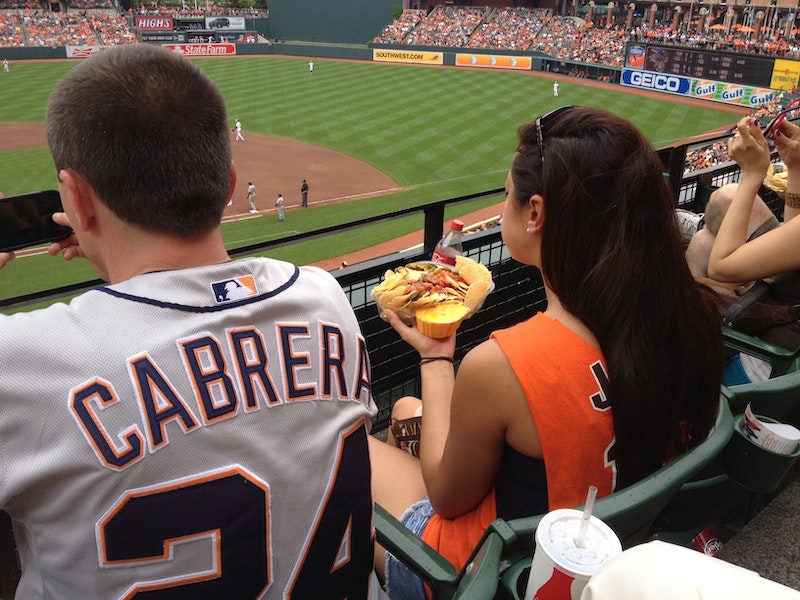 The weather in the Northeast this spring, along with the Orioles’ relative dearth of home games in the first third of the season, had resulted in the unimaginable: it wasn’t until June 2 that the family and I attended our first game at Camden Yards this year. And though it was an on-again, off-again drizzly game, in a soupy humidity which forced my wife to retreat inside between innings for a breather, the O’s 4-2 win against the laconic Detroit Tigers was a winning day at the ballpark. It was great to see a crowd awash in orange—an announced 39,182 attendance—instead of row upon row of empty seats, which until last year was the norm. The O’s resurgence these past two seasons—and I give a lot of credit to Buck Showalter, even though my 18-year-old son, a crack sabermetrics disciple, says a monkey could manage an MLB team, with the GM and assistants doing the heavy lifting—has put me in a quandary since I’m a Red Sox fan who happens to live in Baltimore.

Now, instead of just enjoying a game at the marvelous Camden Yards and watching the scoreboard for out-of-town games, I have a rooting interest: and unless it’s against the Yankees, it’s not for the Birds. Which causes a twinge of guilt, since the Orioles have for decades been my default AL team, but when the division title, and wild-card spots are in the balance, that guilt disappears quickly. The game itself, until the seventh inning, was a lugubrious affair, as O’s hotshot rookie Kevin Gausman had his first strong outing, matched by Rick Porcello in a pitcher’s duel, so I chatted with our boys—while my wife, a Birds fan, was in Oriole Magic zone-out mode—and blabbed about baseball with neighbors in Section 226. In front of me was a quartet of serious Tigers devotees—one of whom was wearing a Miguel Cabrera jersey, which is a little weird for a guy past 40—and, unlike a lot of spectators, they really knew their stuff, looking up stats on iPhones and offering opinions on all the MLB races.

It’s always a little dicey when you jump into a conversation with other spectators, risking intrusion, but these Detroit transplants, now living in Baltimore County, were good sports. On the flipside, during the third inning two guys sat down next to me and, chugging beers, peppered me about everything concerning the Orioles. At first, I thought it was a little strange, but soon enough it emerged they were in town on business from Ottawa, and their knowledge of baseball—as opposed, not surprisingly, to hockey—was negligible. One guy pointed to the O’s bullpen and wanted to know why the players were separated; his friend, a few minutes later, suggested that the AL East teams were in awe of the Toronto Blue Jays, not realizing that that cursed franchise is stewing in the division’s cellar. Nevertheless, the pair was smart and funny, and when I mentioned (somewhat cautiously) that I far preferred the cosmopolitan Toronto to the nasty and parochial Montreal, they nearly jumped out their seats in rapturous agreement. No love for the French, and though it’s a cliché, I think that’s fairly common ground.

Chris Davis, the out-of-nowhere (since last summer) O’s superstar, cracked his 20th homer in the seventh, starting another late-game rally for the team, and raising his average to .357, and that was it for the Bengals. You read on various baseball websites about the Tigers’ dominant starting pitching, but man, if they don’t get some help in the bullpen they’re going to fall short again. Makes sense to me to go after Phillies’ closer Jonathan Papelbon, which would be pricey, but the Tigers’ frail owner Mike Illitich is 83, loaded, and deeply desires a World Series championship before the inevitable occurs.

My day of baseball got a lot better on Sunday night, when the Red Sox, behind Clay Buchholz, whipped the Yanks 3-0 in a rain-shortened game. It was on ESPN, which always sucks, especially when Mr. Marbles In His Mouth, John Kruk, was holding forth, but taking a tip from my father-in-law, I just put it on mute and watched with delight as David Ortiz hit a blast into the right field stands at Yankee Stadium and flipped his bat to the side, a grandstand move that only Big Papi, MLB’s player ambassador can pull off without pissing off the other team.