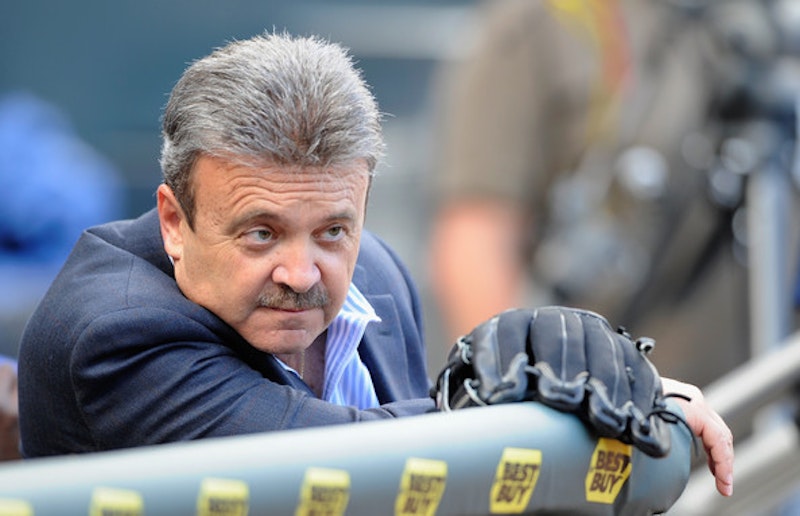 It's been a strange several months for the Los Angeles Dodgers. The club is now for sale after the looming divorce of owner Frank McCourt hampered the team's payroll flexibility throughout the 2011 season. General Manager Ned Colletti has been one of MLB’s most active executives this offseason.

Colletti started out well enough, inking National League MVP runner-up Matt Kemp to an eight-year/$160 million contract extension that will keep the slugger in Los Angeles through his peak years. There’s also been talk that the Dodgers want to lock up Cy Young award winner Clayton Kershaw to a long-term deal. Power-hitting right fielder Andre Ethier may be the odd man out when L.A.'s contract extension carousel grinds to a halt.

Colletti followed up the Kemp signing and Kershaw discussions with a series of low impact moves that, taken individually, look reasonable but when viewed in totality are head-scratchers. The Dodgers started off by inking second baseman Mark Ellis to a two-year deal for close to $9 million in guaranteed money. They needed a second baseman after Jamey Carroll signed with the Indians as a free agent, but Ellis is hardly an upgrade. The 34-year-old posted a paltry .634 OPS in 134 games for Oakland and Colorado last season.

The Ellis deal was followed by a one-year/$800,000 contract for journeyman Adam Kennedy. Kennedy, nearly 36, has ping-ponged around the majors for the past five years. He's versatile, but no longer much of an offensive threat. Kennedy logged significant time at first, second and third for the 2011 Mariners. His on base percentage has dropped precipitously over the past three years bottoming out at just .277 for Seattle.

Just when you thought Colletti had enough middling second base options he signed Jerry Hairston for two years and $6 million. Hairston is a fine player, perfectly suited for the National League. He can play all over the field, run fairly well, and perform when called upon. Hairston was solid for the Nationals and Brewers in 2011, posting a .727 OPS at both stops. He would make perfect sense for the Dodgers, if they hadn't already committed nearly $10 million to Ellis and Kennedy. Alvaro Espinosa and Felix Fermin are no doubt frantically dialing the Dodgers as I type.

After clogging up the middle of the infield the Dodgers moved to shore up the starting rotation. Colletti signed lefty Chris Capuano to a two-year/$10 million contract. Capuano, 33, missed all of the 2008 and 2009 seasons due to injury. He pitched fairly well for the Mets in 2011, striking out 168 batters in 186 innings and winning 11 games. On the downside, Capuano allowed 27 homers and has compiled a career WAR of -0.5. In a best-case scenario Capuano probably gives the Dodgers 180 innings of league average production. Worst-case scenario: his elbow troubles resurface and the southpaw is a washout in Chavez Ravine.

Aaron Harang was the next free agent to agree to terms with the Dodgers. Harang will likely be the Dodgers’ fifth starter in 2012. Colletti has reportedly agreed to a deal that will pay Harang roughly $12 million over the next two years, a hefty sum for a fifth starter. Harang did have a nice rebound season for the Padres in 2011, winning 14 games after flaming out in Cincinnati.

Despite all the maneuvering, the Dodgers lineup and rotation are underwhelming at best. After Kershaw and Chad Billingsley the rotation features the aging trio of Ted Lilly, Capuano and Harang. Lilly is owed $22.5 million for the next two seasons. Lilly's contract brings the total commitment for the over-the-hill gang to a whopping $44.5 million over the next two seasons. If the Dodgers have trouble coming up with the cash for a Kershaw extension, look no further than the commitments to Lilly, Harang and Capuano as the cause.

The starting lineup is even worse off than the rotation. Kemp is an impact player, and Ethier is a solid regular in right, but the infield of first baseman James Loney, shortstop Dee Brown, third baseman Juan Uribe and the free agent triumvirate at second wouldn't scare most Pacific Coast League teams. Not only has Colletti committed roughly $16 million to three underwhelming second baseman for the next two years, he did so after handing Juan Uribe a three-year contract last offseason. Uribe, who is owed $16 million for the next two seasons, posted a woeful .557 OPS for Los Angeles in 2011.

Ned Colletti and the Dodgers should be questioned for the way they have haphazardly shelled out millions to role players several years past their prime. The bill for Lilly, Capuano, Harang, Uribe, Hairston, Ellis and Kennedy comes to a total of over $90 million. With that kind of money the Dodgers could’ve made a play for a star free agent like Jose Reyes or C.J. Wilson. The Dodgers, who went 82-79 last season, apparently have a commitment to spending big money for mediocrity.