There’s no way the O’s land Cliff Lee at the trade deadline. 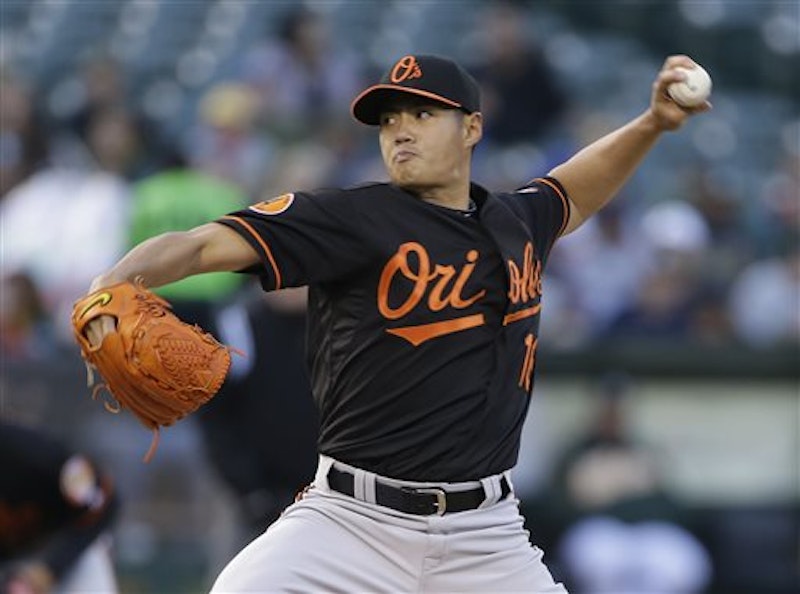 As I wrote in this space last week, the Baltimore Orioles have one of the best offenses in MLB; a main reason the team ranks second in the brutal American League East. Yet, the troubling state of the team’s starting rotation has led many to suggest that the Orioles are an ace pitcher away from being serious World Series contenders.

The struggles of Jake Arrieta, coupled with injuries to Wei-Yin Chen and Miguel Gonzalez, hastened the promotion of 2012 first round draft pick Kevin Gausman. The youngster has flashed great stuff but was hit hard in his two starts before pitching extremely well against the Tigers on Sunday. But if Gausman falters and earns a return trip to the Eastern League the Orioles will be on the lookout for a veteran starter. The rotation will get a boost when Chen, the closest thing Baltimore has to an ace, returns from his oblique strain. Even if Chen returns quickly, and to form, the Orioles will try and upgrade the rotation. Despite his strong effort last Thursday night don’t expect the Birds to count on Freddy Garcia for a full season.

Baltimore airwaves and Twitter feeds have been recently filled with discussion of Cliff Lee coming to the O’s via trade. The Orioles are more likely to acquire Geddy Lee than Cliff Lee. The Phillies’ lefty is still an excellent pitcher, and figures to draw strong interest at the trade deadline, but the Orioles lack the depth of prospects and the bankroll to make such a deal possible. Lee is guaranteed a minimum of more than $70 million between now and the end of the 2016 season. If he pitches enough innings over the next two seasons to trigger his vesting option Lee’s 2016 price tag would be $27.5 million, bringing the total bill for his services to over $90 million. If any O’s fan thinks Peter Angelos would authorize such an extravagant expense he or she hasn’t been paying attention for the past decade.

Angelos has flatly refused to issue high dollar long-term contracts to pitchers. He allowed homegrown ace Mike Mussina to bolt for the Yankees after the 2000 season and nixed a deal for Aaron Sele. The Orioles are seldom even rumored to be interested in the best free agent hurlers. The largest contracts Baltimore has handed out have been to hitters Albert Belle (ouch), Miguel Tejada, and last year’s extension to Adam Jones. Figure in the upcoming paydays for Manny Machado, Matt Wieters, and Chris Davis and it’s clear that any talk of Cliff Lee to the Orioles is daft.

The O’s don’t have the checkbook, or willingness, to pony up for Lee’s contract, but they also lack the prospects required to swing such a deal. Machado and Gausman are untouchables. Dylan Bundy, the best pitching prospect in baseball as recently as early April, has yet to pitch due to forearm discomfort. Surgery has been ruled out for Bundy and the young righty is expected to begin throwing sometime in the next two weeks. If Bundy is unable to take the mound this season he can’t be expected to serve as the centerpiece of any deadline deal. If he can pitch, he’ll likely be considered an untradeable asset by the Orioles’ brass. Either way Bundy is an Oriole to stay. The club’s best hitting prospect, Jonathan Schoop, is currently sidelined at Triple-A with a stress fracture in his back. Schoop is unlikely to return to the lineup before mid-July making his inclusion in a deadline trade unlikely.

Baltimore’s most impressive minor leaguer may be Cuban defector Henry Urrutia. The 26-year-old outfielder has been smashing Eastern League pitching to the tune of a .328 batting average and .906 OPS in 32 games. Urrutia’s lack of an extended professional track record makes him a risky trade option for any interested party. Given the Orioles’ paltry production from the designated hitter spot this season it’s possible that Urrutia’s most likely destination could be the bottom third of the O’s lineup. Urrutia’s Bowie teammate, Mike Wright, has impressed and could be a viable trade candidate. After Wright the Orioles’ best prospects are Class-A infielders Christian Walker and Nick Delmonico, neither of whom can be considered the centerpiece to a deal.

The Cliff Lee talk is a pipedream of Mark Teixeira-sized proportions. The Orioles will likely set their sights on a more affordable and obtainable target like the Cubs’ Scott Feldman or the rehabbing Chien-Ming Wang while the Rangers and Red Sox chase Lee. Feldman has excelled for Chicago after signing as a free agent over the winter. Banished to the Texas bullpen last summer, Feldman has rebounded to post a 2.82 ERA and 1.17 WHIP in 10 starts for Chicago. Feldman’s one-year contract and the Cubs’ rebuilding project make it a virtual certainty that the righty will be dealt. Wang has struggled through injuries over the past several seasons. He’s finally healthy and performing well for the Yankees’ Triple-A squad. Wang has the option to elect to become a free agent at the end of every month. If, or when, Freddy Garcia falters, the Orioles could look to lure Wang with the promise of a rotation spot.

The 33-year-old former Yankee hasn’t been right since 2008 but has apparently regained his excellent sinker, evidenced by his current 2.12 ground ball to fly ball ratio and 2.65 ERA for Scranton-Wilkes Barre. The addition of Feldman or Wang won’t create much excitement among O’s faithful but either move is much more likely than a trade for Cliff Lee.