This Year, Orioles Relying on Offense 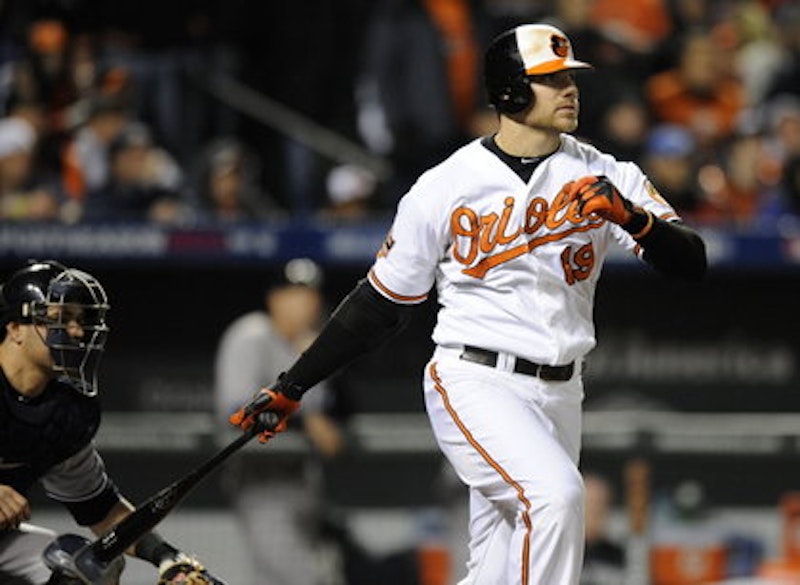 The Baltimore Orioles are hanging tough in the American League East, five games above .500 despite the recent implosion of closer Jim Johnson. The O’s made the playoffs in 2012 in large part due to the efforts of Johnson and his bullpen mates; this year it’s the team’s offense that’s picking up the slack.


Chris Davis has flourished in his new role as Baltimore’s regular first baseman. After taking a wrecking ball to the Rays in the season’s opening series, Davis seemed primed for a cool down. Opposing pitchers are still waiting for the 27-year-old slugger to come back to earth. Davis slammed 32 homers in 2012 and is already more than halfway to eclipsing that mark this season. Davis is at or near the top of the A.L. in all the major offensive categories including batting average (.359), home runs (19), and RBI (50). The most remarkable change for Davis has been his walk rate. After walking just 37 times in 515 at bats in 2012 Davis has already been issued 29 free passes in 184 at bats this season.

While Davis has delivered prodigious blasts the O’s offense has also benefitted from the unexpected maturation of 20-year-old third baseman Manny Machado. Baltimore clearly had big plans for Machado after taking him with the fourth overall selection in the 2010 draft, but the youngster has exceeded any rational projections. While Machado’s defense has drawn raves it’s his offense that has given the Baltimore lineup an added dimension. Machado currently leads the A.L. in doubles, hits, and at bats; he also ranks among the Top Ten in runs, batting average, and OPS. Machado’s strong play in the field and at the plate has made him a prime candidate for a spot on the All-Star team and put his name among Bryce Harper and Mike Trout in conversations about the game’s top young players.

The Orioles added Nate McLouth to the lineup last August around the same time that Machado was recalled from Double-A Bowie. McLouth appeared to be washed up as a big leaguer after he hit .140 in 34 games for the Pirates in the early part of the 2012 season. The O’s had shuffled through a crummy collection of left fielders before giving McLouth an opportunity. The 31-year-old has run with the second chance. After emerging as a playoff hero last October McLouth leads the American League in steals and ranks among the leaders in runs, walks, and on base percentage.

The Orioles have also benefitted from the healthy return of Nick Markakis and the continued maturation of Adam Jones. Markakis, long considered Baltimore’s top offensive player, is now more a table setter than a run producer. After missing time to injury in 2012, including sitting out the playoffs, Markakis has returned to the lineup and resumed his habit of slashing line drives to the gaps. Jones has emerged as one of the top run producing outfielders in the league. The security of his $85.5 million contract has apparently eased the mind of the O’s center fielder. Jones has committed a few defensive gaffes this season but his 10 home runs, 35 RBI, and .313 average makes him an indispensable part of Buck Showalter’s lineup. Jones has walked just eight times this season but he has down a better job of laying off the low and away slider that haunted his nightmares in seasons past.

The Orioles have suffered through an unsettled starting rotation and the sight of their ace closer coming repeatedly coming unglued but figure to remain in the playoff chase thanks to an offense that currently ranks second in the Major Leagues in runs. Baltimore’s run scoring acumen is even more impressive when you consider that team has virtually no production from second base or designated hitter and All-Star catcher Matt Wieters has struggled to find his batting stroke.