Orioles' Biggest Battle May Be Off the Field 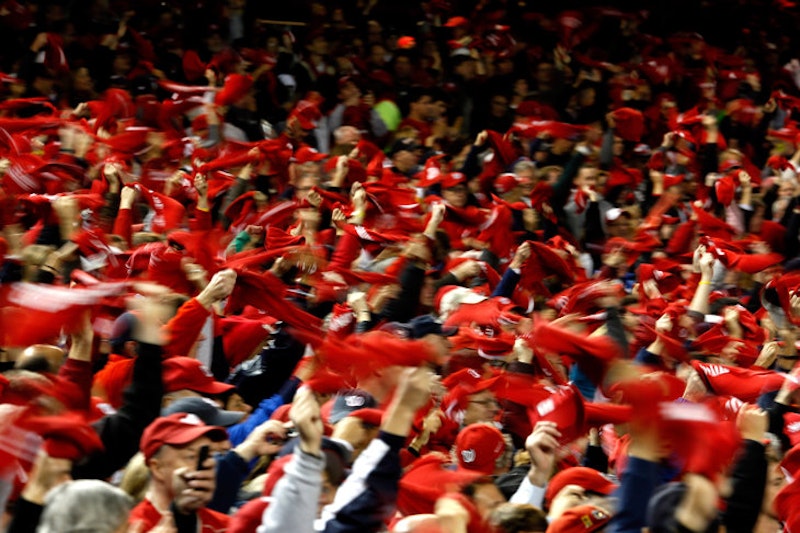 The Baltimore Orioles are currently leading the American League East with a slim 2.5 game advantage over the Toronto Blue Jays. The O's battle for East Coast supremacy with Toronto and the third place Yankees will bring great joy to Baltimore's baseball fans but an off-field battle of greater importance looms. The Orioles and Washington Nationals have been battling over television money for years and with MLB Commissioner Bud Selig set to retire, the impasse is about to get crazy.

An excellent piece in The Hollywood Reporter outlined the details of the case. Here’s a summary:

The Orioles were given a sweetheart deal for waving territorial rights to allow the Montreal Expos to relocate to Washington (2005) and become the Nationals. The deal created the MidAtlantic Sports Network (MASN) and ceded Peter Angelos and the Orioles ownership of the new venture. Angelos was given near full control of the network and placed severe caps on the amount of money the Nats could make off the TV deal. The original contract called for a renegotiation after five years at which time the Nats would be paid "fair market value" for their broadcasts.

A strange thing happened on the way to fair market value. The market for television rights fees for MLB teams absolutely exploded. Teams began signing multi-year, multi-billion dollar local TV deals which they then used to hand out absurd contracts to players like Albert Pujols, Joey Votto, and pretty much anyone playing for the Dodgers.

Under the old MASN deal the Nationals received about $29 million per year. A pittance when compared the deals recently signed by the Phillies, Angels, Dodgers, Mariners, etc. The Nats wanted something closer to $100 million. The $70 million gap between the Orioles and Nats led to an impasse in negotiations and the dispute was sent to an arbitration panel. The panel unsurprisingly ruled in favor of the Nats. I say " unsurprisingly" for a few reasons, 1) the panel consisted of executives from other MLB teams who have a vested interest in seeing local TV deals move ever skyward, and 2) the concept of "fair market value" was never a part of the initial MASN deal so a simple continuation of that deal is not a viable solution.

As an Orioles fan, I have little concern for the Nats in this matter so I'll focus on how this mess affects the Orioles and MLB. The MASN deal includes a provision that states that the Orioles must receive the same payment as the Nats for local broadcast rights. If the Nationals win this dispute and are awarded rights fees close to $100 million per season it means that the Orioles will see a tremendous shift in assets from Peter Angelo's' MASN coffers to the Orioles' earnings report. Angelos will no longer have the ability to "hide" profits in the network as many local fans and sportscasters have assumed. While that could be great news for the Orioles payroll, the awarding of such a tremendous increase in local broadcasts fees paid to the two clubs could potentially bankrupt the network. So who gets to keep F.P Santangelo? I hope no one.

For MLB, this dispute has dragged on for nearly four years, and if you go back to the band-aid that was the initial contract between the clubs, it's been nearly a decade. The Orioles have been handsomely compensated for giving up their territorial rights to grease the skids for the Nats to move to D.C. but enough is never enough for Angelos and company. Selig's recent public remarks on the subject suggest that the octogenarian Commissioner has reached his wits end. This isn't the first time Selig let a major problem linger unaddressed for the better part of a decade. Putting his head in the sand has become an integral part of his legacy. The real danger for MLB is if the two clubs end up in a courtroom to decide the matter. A court proceeding would open up the MASN books, and likely the financial records of the Orioles and Nationals, and perhaps other clubs with recently inked TV deals, to public scrutiny. Selig, MLB, and the various ownership groups will go to great lengths to keep federal and local governments and the Major League Baseball Players' Association out of their financial statements. MLB may have a hard time suckering local municipalities into building billion-dollar publicly-funded pleasure palaces if the true profitability of the league and its member clubs is made available. The MLBPA would also take a keen interest. Even "small market" clubs have money to burn, and an inside look at club records and detailed scrutiny of broadcasts fees could be a boon to the players in the next collective bargaining agreement.

MLB has much to hide, the Nationals a lot to gain, and Angelos personally could lose hundreds of millions over the course of the next MASN deal. If we're to simply follow the money to find a likely solution I'll assume there's no way Selig, or his unlucky successor, allows this to reach a courtroom. Angelos isn't one to cave in to strong-arm tactics, and simply waiting out the old man hasn't proven to be a fruitful strategy in this case. My guess is that MLB will punt again on this one with the league itself continuing to subsidize the Nationals broadcasts fees while they wait for Angelos to exit for the great beyond or the Lerner family in D.C. to become so fed up they sell the club and move on. If Selig has proven adept at one thing during his more than 20 years in the league office it's that he is a master procrastinator.

This much is certain: if the Orioles playoff run falls short, the offseason will still offer plenty of fireworks.