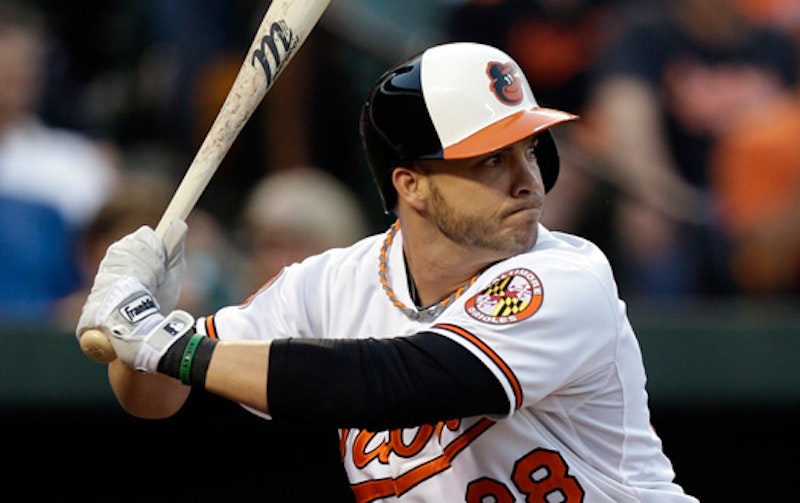 Oakland and Detroit have company atop the American League standings: the Orioles and Angels. While all four of those squads feature ample firepower, it’s the unexpected contributors that have laid the groundwork for a tight pennant chase.

The Angels have rebounded from a series of frustrating seasons to battle the A’s for AL West supremacy. While Mike Trout rightfully gets the bulk of the headlines in Southern California, and the high-priced free agent trio of Albert Pujols, C.J. Wilson, and Josh Hamilton have shouldered the blame for past disappointments, it’s a pair of homegrown players that have helped fuel the Angels' renaissance. Kole Calhoun may sound like the name of Blake Shelton's opening act but he's actually the Angels' highly productive right fielder. After playing a bit role over the past two seasons the 26-year-old Calhoun has become one of Mike Scioscia's core offensive players. Calhoun has established himself as an effective lead off hitter with a .346 on base percentage and 53 runs scored in 69 games.

The Orioles lead the American League East despite the ongoing struggles of Chris Davis and the lack of a dominant starting pitcher. Adam Jones and Nelson Cruz have carried the offense with a major assist from journeyman Steve Pearce. The former Pirates prospect has bounced around the American League over the past three seasons making multiple stops in Baltimore along with brief stays in New York and Houston. Pearce has assumed the everyday left field role for the O's thanks to a newfound power stroke and the flop of offseason acquisition David Lough. The 31-year-old Pearce has already established career highs in every major offensive category. Buck Showalter and the O’s are hoping to ride Pearce's hot bat right into October.

The Tigers entered 2014 once again as prohibitive favorites in the AL Central. The Tigers’ trip to the top has been a bit rockier than expected thanks in part to the struggles of ace pitcher Justin Verlander. The former Cy Young winner and six-time All Star currently sports a hefty 4.84 ERA and leads the American League in hits and earned runs allowed. Not exactly what manager Brad Ausmus had in mind for his debut season. Ausmus can take solace in the fact that 25-year-old righty Rick Porcello has busted out in his sixth big league season. After pitching in the shadow of Verlander, Max Scherzer and Anibal Sanchez, Porcello currently leads the American League in wins with 12 and has career bests in ERA, WHIP, ERA+, and hits per nine innings.

The Oakland A's have baseball's best record and a payroll albatross at the end of the bullpen. Billy Beane shocked many observers when he traded for former Orioles closer Jim a Johnson over the winter. Johnson struggled for Baltimore in 2013 and was due to earn more than $10 million for the next season. Johnson predictably pitched his way out of the closer role in Oakland before the end of April. As Johnson moved down Bob Melvin's depth chart, Sean Doolittle became Oakland's new fireman. The third-year reliever has saved 14 games, while posting eye-popping numbers. Doolittle's strikeout-to-walk ratio (68:4) and WHIP (0.65) outpace even Atlanta's star Craig Kimbrel. Doolittle recently made his first All Star squad and may soon register his first Postseason save.