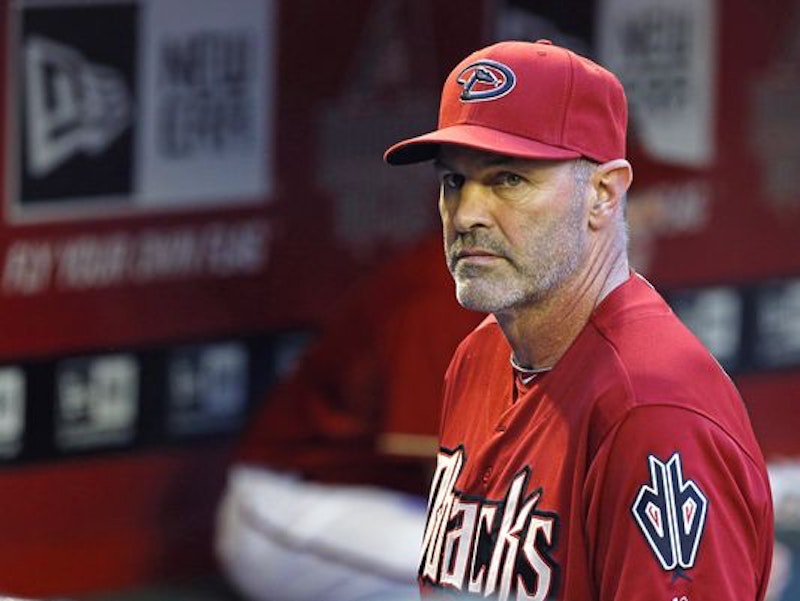 Having never bought in to the myth of Kirk Gibson the player—the gimpy home run off Dennis Eckersley early in the 1988 World Series has inexplicably been elevated to Bill Mazeroski status—it’s time to call out Kirk Gibson the manager as a horrible, no-good lout and a gutless wonder. And I write that with all due respect.

It was announced Monday night that Pirates’ star Andrew McCutchen was placed on the disabled list with an oblique strain that was no doubt a result of him getting nailed on the spine by a 95-mph fastball from sandbagging Diamondbacks reliever Randall Delgado. On Saturday night, Arizona was down in the ninth inning, and their pitchers had the previous eight innings to “retaliate” for the accidental HBP that broke their star player Paul Goldschmidt’s hand the night before. Gibson had given Paul the night off, but for some reason had him pinch-hitting during garbage time in the ninth inning with the Pirates leading and with their own Wildman Ernesto Frieri on the hill.

After taking the fastball to the upper lumbar, McCutchen dropped face down in the batting box dirt. When he got up, he was pissed off and slammed the bat down, a gesture rarely seen by those of us who follow every move of the classy reigning NL MVP. If I was Clint Hurdle, I would’ve given McCutchen Sunday off, but no, he stayed in, made a diving catch, looked uncomfortable, then hit a sac fly late in the game and had to be helped down the dugout steps.

This past weekend’s antics in Phoenix sent me back to a time when I was on assignment for the Pittsburgh City Paper in March of 1992. It was a Spring Training preview of the Bucco squad on the brink of NL supremacy before an inevitable 20-year death spiral that would commence the following season. Gibby, as he was elegantly known, awkwardly threw me out of the Pirates Spring Training “clubhouse” on a rainy day in Bradenton.

I had just talked to Doug Drabek and finished a short chat with Steve Buechele and Andy Van Slyke, who were both buttoning up uniforms during a rain delay pregame. The clubhouse was more of a double-wide trailer type of deal with high windows and ratty ceiling fans. Old school spring training, media wandering about, no security per se and not that many posted rules about what is kosher and what is not. With notebook in hand, I thought all was fine until Kirk Gibson, a free agent rental with lots of “veteranosity,” noticed my sharp Nikon camera (lens cap was on) hanging from my shoulder. It was a magical device borrowed from my then-girlfriend from the rough and tumble Pittsburgh suburb of McKees Rocks. She was a kick-ass reporter with red hair who had moved to Brooklyn after a stint with The Arizona Republic. It somehow lit a fire underneath the hulking jackass from Michigan.

“Hey!” screamed Gibson, kind of at me and in the direction of Buechele and Van Slyke, visibly startling the third baseman and causing the centerfielder to roll his eyes at the volume of Gibson’s scream. “He’s trying to take a picture of your DINK!” Maybe it’s a Michigan State thing, but I (and several Pirates players standing in awe of the outburst) had never heard the male anatomy referred to as such. Not to mention that everyone in the room had their pants on at the time. The clubhouse boombox cassette seemed to slow to a stop and the Pirates assistant to the assistant PR guy skulked in and kind of led me to the door and back out into the rain.

I had my “quotes” so I was fine. “What an asshole,” I said, which drew a chuckle from sleepy pitcher Bob Walk whose locker was relegated to a broom closet near the side door. Gibson’s tenure with the 1992 Pirates would last a not-so-sweet 16 games during which he underperformed so badly he was released by the team in early May and of course announced his “retirement” before the agate type could be set on his professional demise. There was an incident against the Cubs in which his batting helmet fell off on the way to second base and actually stopped a teammates’ grounder into right field. Bad luck or bad karma for mistreating writers?

As for this season, ever since the Diamondbacks got swept by the Dodgers in the 2014  two-game “Opener” in Sydney, Australia, Gibson’s charges have stunk up the joint. Oddly enough it was Arizona third base coach Dave McKay who started the antics during the post-game after Goldschmidt got hit. He was barking at Pirates catcher Russell Martin, who would have none of that kind of banter from a steroid-enabling has-been from the Tony LaRussa St. Louis regime. That meeting was brief, near the third base line. Many were prepared for fireworks on Sunday night. At least one Pittsburgh writer advised that McCutchen wear “extra armor.” Another pointed out, quite cleverly, that the ultimate Diamondbacks revenge for Goldschmidt’s exit will be Gibson’s team tanking the final three games of the season at home against the Cardinals, the squad battling the Pirates for NL Central supremacy with the Brewers nervously looking for the toilet as they are relentlessly pursued.

The McCutchen beaning has the slight scent of LaRussa about it. Back in May, the now-inducted Hall of Fame and MENSA practitioner was hired as Arizona’s “chief baseball officer,” a Showalterian title if ever there was one. The Arizona franchise bears the markings of anal-retentive skipper Buck Showalter from its birth. That’s why the ballpark has the stupid and pointless quirks of the dirt path to the mound and an outfield fence that resembles a video game improvisation. And now the Diamondbacks have come full circle, abandoning Bucky’s purple color scheme for the trendy brick red and black more suited to his mentor LaRussa, who finds himself at the semi-helm with the baseball equivalent of the Duke lacrosse team running his dugout.

Internet dinosaur Will Letch was wrong, apparently, in the conclusion of his lengthy May 2013 “Sports on Earth” standard wishy-washy piece about LaRussa’s legacy: “There’s no room in baseball for someone as big as Tony LaRussa anymore. This is to the game’s detriment. And its benefit.” There will always be room for a big ego in the desert, Will.

The Internet has also wrought video of Arizona catcher Miguel Montero’s signals to pitcher Delgado before McCutchen was nailed Saturday night. The All-Star back-up gave the middle finger, and then the thumb toward the batter prior to the fastball that took out Pittsburgh’s star player, who was often targeted by Cincinnati pitchers early in every Reds-Pirates series of the past few seasons. Women’s softballers have pointed out that is the universal sign in their sport for the beanball. Good thing Montero is taking his cue from the ladies, as that might not sit well with his macho manager who still walks as if he has a pole secured within his nether regions. You know, the area just south of his “dink.”

Delgado was immediately tossed from the game by home plate umpire Ron Kulpa. As of late Monday night, MLB wonks had yet to issue any fines or suspensions to Delgado, Montero or Gibson who probably should’ve been fired shortly after the Mets came into Phoenix and swept three games over tax deadline day in mid-April by a collective score of 21-5. The D’bags were in the midst of a 3-11 skid. Gibby must have compromising photos of someone in the front office if he’s still cashing Arizona checks by Labor Day.

So the anti-team ESPN pundits now have the single-personality news peg to write off the Pirates as they hunt for October in the NL Central, certainly right in the mix as Miami, San Diego and Detroit visit Pittsburgh in the coming week. Early talk is that McCutchen might sit for three weeks of recovery. Maybe the Bucs need another shot of “underdog” to inspire them the way Tim Foli did in 1979, or the way Shawon Dunston did in 1997, or last season when a whole host of Marlon Byrd types fluttered into a clubhouse that reversed the misfortunes of those early 1990s days when an asshole named Kirk Gibson tried to rule a rainy Spring Training clubhouse in Bradenton, Fla.

—Spike Vrusho is the author of Benchclearing: Baseball’s Greatest Fights and Riots published in 2008 by Lyons Press.