The arrival of Javier Baez gives hope to fans. 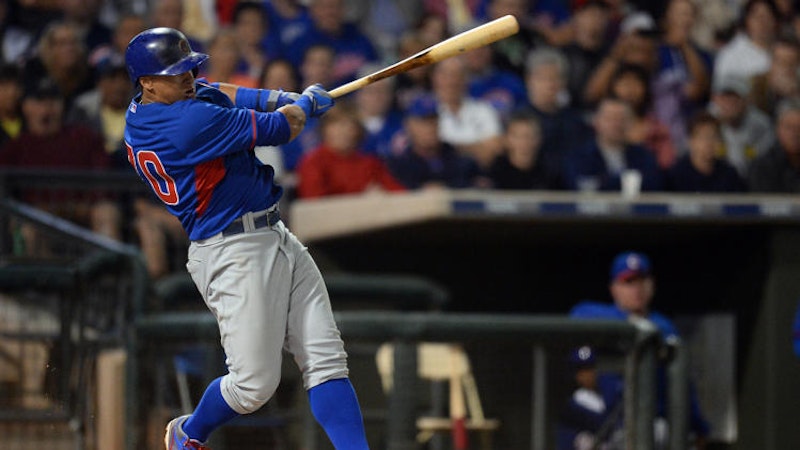 The Chicago Cubs have recalled slugging infielder Javier Baez from Triple-A Iowa. The 20-year-old is regarded as one of the top five prospects in baseball and his big league arrival serves as the dawn of a new era of Cubs baseball. The rookie's sudden arrival breathes life into another moribund season in Wrigleyville.

The Cubs’ front office has been pointing to the 2015 season as a target date for fielding a competitive team. The promotion of Baez is the first legitimate sign that such talk is more than just lip service. Baez will join the recently promoted Arismendy Alcantara and young All Stars Anthony Rizzo and Starlin Castro to give Chicago a solid foundation.

Baez was primarily a shortstop until a few weeks ago. The maturation, and long-term contract, of Castro meant that the shortstop position in Chicago wouldn't be open any time soon. The front office shifted Baez to second base, a move that was discussed in Spring Training but delayed until he flourished with the bat at Iowa. Baez battled through early season struggles to post a .999 OPS in July. The Cubs recent trades of Darwin Barney and Emilio Bonifacio, as well as Alcantara's ability to play center field, cleared a spot on the diamond for Baez.

Baez has struggled at the plate at each new step in the minors. The 2014 season presented a similar challenge with Baez hitting near .200 and striking out at an alarming rate through May. Baez made the needed adjustments and took off at the plate combining with third baseman Kris Bryant to put on a power show for the Iowa Cubs. Baez will bring his quick bat, which has drawn comparisons to Gary Sheffield and Manny Ramirez, to the Major Leagues with Bryant soon to arrive.

There are a few things fans can read into the promotion of a Baez. The early August call-up means that Baez will have two months to adjust to big league pitching, potentially putting him in position to overcome some growing pains during a lost season so that he's ready to really contribute in April. Baez's promotion also alerts fans that the Cubs aren't going to put playing service time games above player development. While the Astros and Rays have made a business practice of intentionally fielding an inferior product for the monetary gains associated with delaying Major League service time for top young prospects the Cubs are operating under no such financial limitations. Just as Alcantara has proven himself worthy of big league duty Baez has earned his spot in Chicago. The recall of Baez also opens the possibility of a Kris Bryant and/or Jorge Soler debut in the coming weeks.

As Bryant and Baez turned the Pacific Coast League into their own home run derby, Soler was abusing Southern League pitching staffs. The Cuban outfielder slugged a robust .811 in July, proving that he was over his chronic hamstring issues and on the fast track to Chicago. Bryant may be the best-hitting prospect in baseball but the Cubs are still trying to settle on his ultimate position. The shift of Baez to second base and Alcantara's move to center field leaves the hot corner in Chicago wide open for Bryant but his future may be in the outfield.

The Cubs acquisition of Addison Russell from Oakland last month gave the organization another dynamic offensive prospect with the athleticism to play anywhere on the diamond. Russell, 20, is a shortstop, like Baez and Alcantara before him, but with Castro entrenched on the Northside a position shift may be in Russell's immediate future. Russell could be Chicago's third baseman of the future with Bryant shifting to left field. If Southern League pitchers breathed a sigh of relief after Soler's promotion to Triple-A, Russell has done his best to bring back those insecurities. In 25 games for the Tennessee Smokies, Russell has jacked eight long balls and posted a .899 OPS.

The restocking of the farm system by Theo Epstein and Jed Hoyer has left the Cubs with a collection of young, high-end, positional talent. The promotion of Javier Baez is the first drop of what could be a franchise-altering talent pipeline. It’s likely Baez will struggle over the next eight weeks while mixing in moments of brilliance. The rookie's on field production is much less important than his presence in the lineup. The future of the Cubs has arrived in the form of Javier Baez and he has plenty of talented friends on the way.