The Orioles can win or go home. 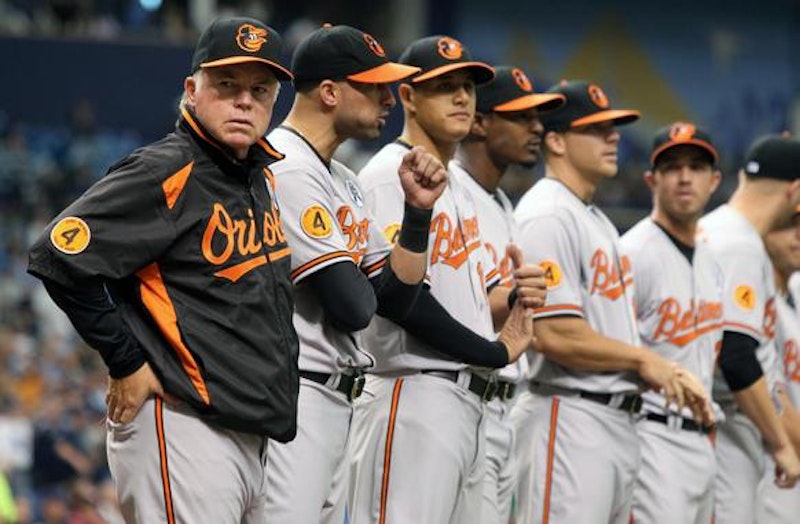 It all comes down to the next 13 days for the Baltimore Orioles. After an offseason of grumbling about Joe Saunders and Mark Reynolds, five months bitching about Jim Johnson, and the past three weeks trying to figure out just what Buck Showalter’s been thinking, Orioles fans are scoreboard watching. Yes, the team has been maddening. Yes, Showalter’s in-game decision making has led us to scratch our heads. Yes, Dan Duquette’s failure to obtain a real designated hitter has hampered Showalter’s options. Despite all of that the O’s have a puncher’s chance at the postseason with less than two weeks to go.

I started looking at the remaining schedules for the American League Wild Card contenders last night and the Orioles’ current position can best be summed up as “Just Win!” The Orioles are in Boston for a three-game set with the Red Sox and their magical beards this week. The Birds were just in Boston a few weeks ago but thanks to Bud Selig and his unbalanced schedule a return trip to to face the red-hot Bosox is the latest hurdle for Showalter’s boys to clear. The last time the O’s were in Boston they lost two of three to start off their disastrous nine game road trip. Baltimore dropped six of nine against the Red Sox and fellow Wild Card chasers from Cleveland and New York.

That trip probably should’ve buried the Orioles’ playoff hopes but thanks to a slump by the Tampa Bay Rays and another season ending face plant by the Texas Rangers the O’s are still in the hunt. The Orioles won’t feel any sympathy for the Rays or Rangers as they have plenty of problems of their own. Bud Norris is sidelined with an arm injury, Darren O’Day is experiencing numbness in his fingers and hasn’t pitched since September 7th, and Showalter is still searching for a DH that can hit right-handed pitching.

The Orioles will have the good fortune of missing both Clay Buchholz and Jon Lester this week in Boston. Showalter will have two of his hottest pitchers in Scott Feldman and Chris Tillman set to face the Red Sox. The downside to Tillman starting Thursday’s finale at Fenway is that he’ll be unavailable for the upcoming four-game weekend series in Tampa.

The convoluted Wild Card chase has left Orioles fans with ever-changing loyalties. The O’s would be best served by having the Rays bury the Rangers with a series sweep this week. If Showalter’s crew can hold their own against Boston they would have four games in Tampa to make up their deficit to the Rays. While the Rays and Rangers hammer things out at Tropicana Field the Royals and Indians are locked in another battle with Wild Card implications. The Indians are directly in front of the Orioles in the standings so any Cleveland loss is good for Baltimore. As soon as the Indians leave Kansas City the Royals once again become an enemy of the O’s. The only constant in all of this is that there’s no reason to cheer for the Yankees, thankfully.

Of course, all of this is moot if Showalter and company fail to take care of business. The Orioles have themselves to blame for the current predicament.