Reporters don't ask men if they feel compassion for their opponents. 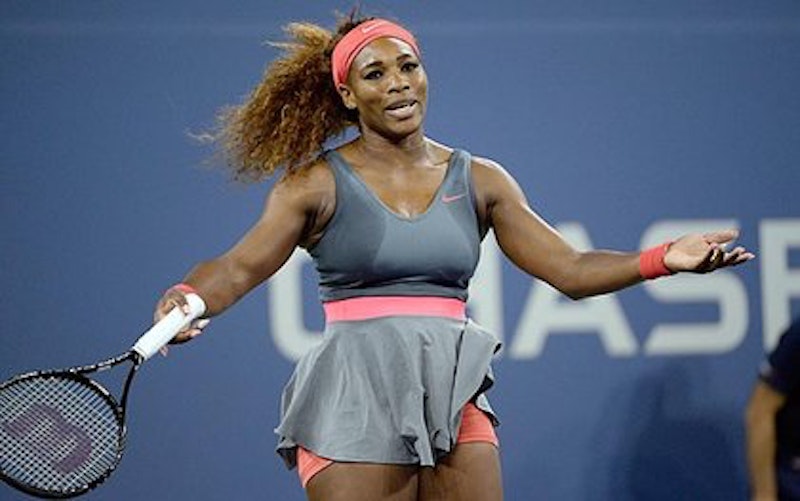 Last week at the U.S. Open, Serena Williams served up a “double bagel,” meaning that her opponent didn’t score a single point in the two-set match. Williams, no stranger to double bagels, is also no stranger to race and gender based media coverage. In the press conference following the beatdown, a reporter asked Williams if she felt compassion for her opponent. She responded by saying that it hadn’t occurred to her, that she was focused on the game.

A New York Times article grazes the surface of why the compassion question is problematic: “Has anyone in the history of major league baseball ever expressed sympathy or apologized after pitching [a perfect game]?” I try to imagine a reporter asking the mullet-adorned, five-time Cy Young Award recipient Randy Johnson this question after either of the two no-hitters he pitched. It’s laughable. Serena Williams, who last week won her fifth U.S. Open title, is a four-time Olympic gold medal winner, the WTA’s No. 1 ranked female singles player, and the holder of 31 Grand Slam titles. Asking her this question undermines the seriousness of her game—a game to which mercy is irrelevant. If we aren’t willing to discuss our fuzzy feelings in male sports, why should we in female sports?

With this in mind, imagine my surprise when this summer, while working at a boarding school in Switzerland, I found myself advocating for the soccer program to treat the female students differently from the male students for emotional reasons.

If you’ve ever played a recreational, mix-gendered sport, whether in an adult league or a college intramural team, you are familiar with the “two girls on the field rule,” which, exactly as it sounds, requires any two female players on each team to be playing at all times. I’ve been concerned that this rule is motivated by the belief that girls are a detriment to a team, at best dead weight. However, at the Swiss school’s soccer tournament, there was no “two girl rule,” and so none played. I watched a normally competitive female soccer player sit on the bleachers in flip-flops with her arms locked around her knees, as a group of rowdy high school boys raced onto the field. When I asked her why she wasn’t playing, she gestured towards them and said, “I mean, look at them.” She was right. They bounced onto the field with effervescent confidence. If she played, she would be the only girl and presumed a nuisance until she proved otherwise.

Regardless of how you feel about Sheryl Sandberg’s book, Lean In, this moment is reminiscent of a scene in which the author describes hosting a breakfast meeting with Timothy Geithner and finding all of the women sitting on the periphery of the room rather than at the table. Self-doubt haunts the women I know more than their male counterparts, and it’s particularly pervasive in their teens and 20s, those critical years that shape the rest of their lives. It could be an awareness of a long history of lacking a visible place in the professional world. It could also be medical, as University of California San Francisco neuropsychiatrist Louann Brizendine describes in her book, The Female Brain. The area in the brain that is responsible “for anticipating, judging, controlling, and integrating negative emotions… is larger and more easily activated in girls.” This self-doubt factory is called the anterior cingulate cortex and is the part of your brain that is telling you to stay on the bleachers because you aren’t good enough.

As I considered this 16-year-old girl, I was struck with the sense that this was one of those rare circumstances in sports when it is okay, maybe even necessary, to treat girls as emotionally different. She had different emotional needs than the male players. She needed to feel as though she had a place in this game—she needed the “two girls on the field” rule.

The experience of playing versus sitting out was important not because this female soccer player has a shot at being the next Serena Williams or soccer’s version of her, but because it is a scene that will be reenacted throughout the rest of her life. Moments where you feel like the least qualified person in the room abound. According to the Institute for Women’s Policy Research, the U.S. working world, especially in higher paying jobs, is predominantly male. Sports are practice for those moments. A girl can feel what it’s like to be intimidated and stay on the field anyway—but she may need an extra push. Williams played tennis for the first time when she was three years old, so she’s had nearly 29 years of intensive play to cultivate the unflappability she displayed in the press-room after her double-bagel.

Perhaps if there was more encouragement of female sports participation, women could get more practice in intimidating environments and might comprise more than an abysmal four percent of Fortune 500 chief executives or 19 percent of Congress. There would be more women like Serena Williams who crush their opponents without apology.