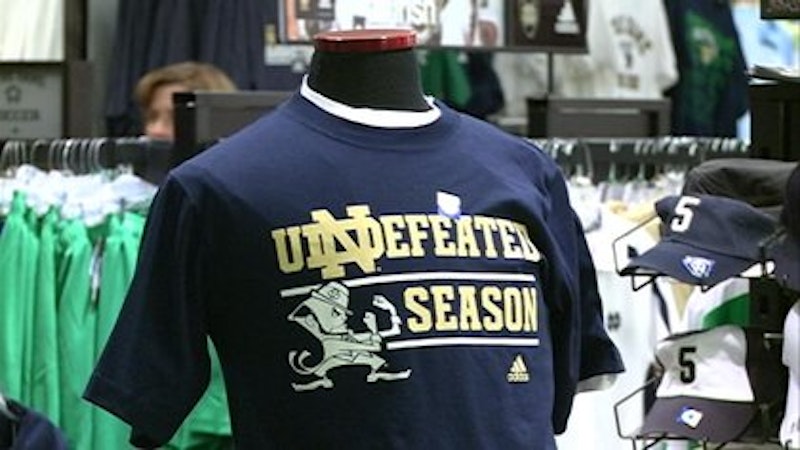 As I write this, I hear ESPN, or whatever sports channel is talking most about Notre Dame, blasting on the TV in the other room as it will be for 12 full hours today. As many know, the #1 Irish will play #2 Alabama tonight in the 2013 BCS National Championship game in Florida.

There was a great piece in the New York Times yesterday by Kevin Flynn about his family’s lifelong near-obsession with Notre Dame football. Though no one in his family went to Notre Dame, being Catholic and Irish in the Bronx makes him part of the university’s christened “subway alumni.”

My father-in-law and brother-in-law are Notre Dame alumni. My husband, despite potential unspoken shame of his dad, did not attend ND. This didn’t mean he wasn’t forever a 100 percent fan of all things Irish.

The fact that I accidentally chose a wedding date and time that coincided with the Notre Dame-USC game back in ’91 meant the game played in the limo, which was occupied during part of the mass right up until nuptials were hastily exchanged while people glanced at their watches, eager to get to the bar at the reception to watch the second half. A year later, my first anniversary was spent in theory at a bed and breakfast but in actuality (since there was no TV at the inn) stopped dead in the middle of a mountain road where the partial radio signal picked up the classic 1992 "Snow Bowl" Notre Dame-Penn State game.

Upon his birth in '05, my son was brought home from the hospital early in the day in order to watch Notre Dame beat Michigan; the kid wasn’t even 48 hours old.

I have learned to accept the culture of the Notre Dame Fighting Irish. I’ve been to a tragic Orange Bowl loss against Colorado in ‘91 and to South Bend for a tragic “Holy War” loss against Boston College (’93; the stadium atmosphere is truly amazing). Then I wasn’t allowed to go to Notre Dame games anymore because I was causing them to lose tragically.

My kids all have ND head to toe gear, they like watching games with their dad, currently wearing the pictured shirt, who is miraculously able to keep his still-frightening screaming to a minimum during most games. We have a Notre Dame snuggie in our house. Tonight, they all have permission to stay up late to watch the game, late morning rides to school have been offered. I mean, the team was undefeated this season. Education be damned.