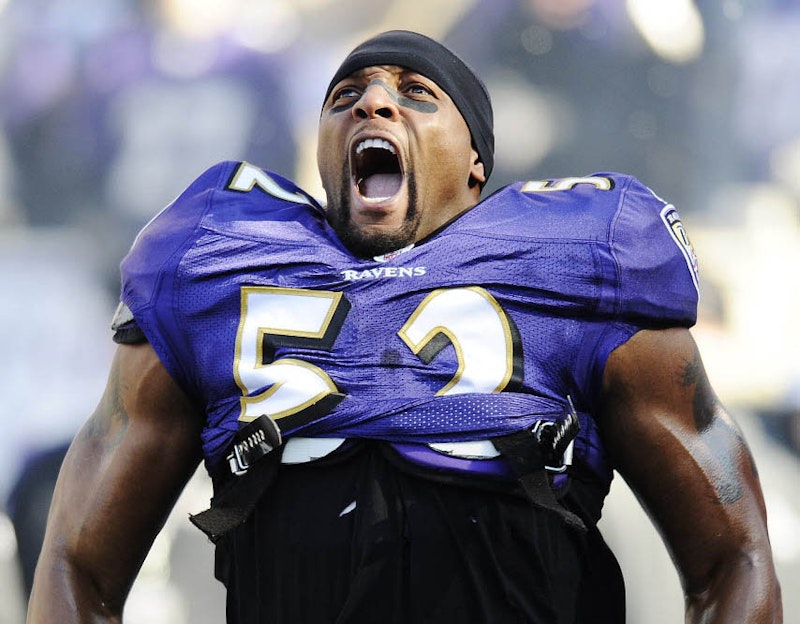 When Ray Lewis announced last week that this would be his final season a strange wave of emotion swept over the Baltimore area. I wasn’t really shocked by the news (37-year-old linebackers are few and far between) but was stunned by the timing. Lewis hadn’t played since suffering a triceps injury in October but somehow once again managed to make himself one of the game’s most pivotal figures. In making his announcement prior to the first playoff game Lewis allowed the Ravens to steal the emotional edge from the Colts, took the pressure off his teammates, and whipped the city into a frenzy that will last until the end of the season.

Out-of-towners still see Lewis as the guy in the orange jump suit and shackles who was charged with murder nearly 12 years ago. They see his pre-game dance as pure self-aggrandizement. They view his many good deeds with skepticism. They think he got away with something.

In Baltimore we know different. We’ve heard plenty about the star-struck, overzealous Atlanta prosecutor. We’ve seen Lewis’ good deeds in action. We’ve viewed weekly examples of his leadership on the field. We’ve lost our voices cheering his on field performances. We love the stupid pre-game dance.

As the Ravens put the finishing touches on their 24-9 playoff win over the Colts on Sunday they treated fans to a quintessential Baltimore sports moment. Head Coach John Harbaugh inserted Lewis into the game at running back for the final kneel down. It gave the throng of 70,000 screaming, purple-clad fans one last chance to cheer their hometown action star. QB Joe Flacco took a knee and Lewis once again did his patented dance, this time on the field, as the crowd went crazy. My Twitter timeline erupted with people complaining once again about Lewis’ dance, as if the dance was for him. His last dance was a final thank you to the fans that supported him through highs and lows for the past 17 years. The dance has always been about the fans, something critics have failed to realize.

Lewis couldn’t have arrived in Baltimore at a better time. He was the second player drafted by the team after the relocation from Cleveland. Just as Baltimore was told to build a museum after the NFL awarded expansion franchises to Charlotte and Jacksonville Lewis was told that he was too small to be a middle linebacker in the NFL. Turns out the NFL was wrong on both counts. Baltimore has emerged as a perennial contender and one of the toughest places to play in the league. Lewis ended up being the best linebacker, and one of the best showmen, in the game’s history. Lewis, like Baltimore, is flawed, proud, and dedicated.

While the out-of-towners can keep up the self-defeating vitriol about Lewis being an overrated, self-promoting, murderer, the people of Baltimore will add his image to the city’s Mt. Rushmore of sports heroes. It seems like a pretty fitting place for the ultimate larger-than-life figure.