The Mystery of Arizona's Justin Upton

Why is a top talent ignored by other teams? 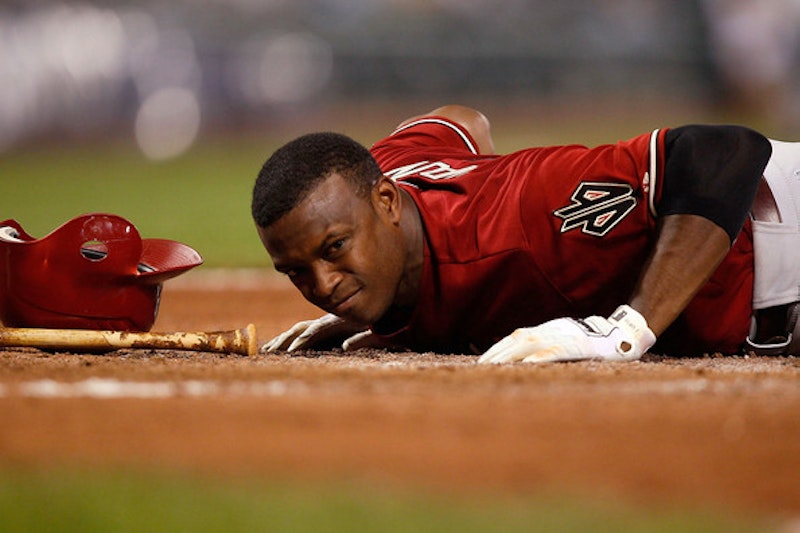 Why doesn’t anyone want Justin Upton?

His brother, B.J., also known as “the other Upton,” just signed a five-year/$75 million contract with the Atlanta Braves in November. His services were clearly in demand. Now that his younger and more talented brother is on the trade market (okay, the Diamondbacks have been trying to trade him for three years), nobody is interested.

My first guess was that teams became more disinclined to surrender top prospects in trades because of the crippling new Collective Bargaining Agreement—since they can’t spend on amateur talent, top prospects will be harder to come by for successful teams (and unsuccessful teams that draft poorly). That is obviously untrue, though, evidenced by Toronto’s two recent deals and Arizona’s own trade of future ace Trevor Bauer.

Then I considered the fact that Upton has $38.25 million remaining on the next three years of his contract, which is a little steep for a top flight outfielder capable of winning multiple MVP awards across his career. Oh wait, it’s not. Upton will be a bargain for the next three years. With the free agent market inflating substantially in the wake of the potentially franchise altering new CBA, $38.25 million/three years is a steal.

Maybe, then, nobody wants him because of his poor performance last year, a season in which he played through injury and lived with constant rumors of his impending departure to a rival team?

That’s not it either. Clubs have shown a willingness to gamble on players coming off disappointing seasons like none before this winter. The Red Sox, for example, have made four major signings this offseason: Shane Victorino ($39 million/three years), Ryan Dempster ($26.5 million/two years), Mike Napoli ($39 million/three years. This one will probably fall through because of a rumored failed physical. Still, the fact they wanted to sign him is evidence enough), and Stephen Drew ($9.5 million/one year). Do you know what all four of those players have in common? They all performed badly in 2011 (Dempster’s horrible second half with the Rangers outshines his excellent first half with the Cubs). Lance Berkman didn’t even play baseball last season and he landed $10 million from the Rangers.

I really don’t know why teams are so hesitant to trade for Justin Upton. He’s been labeled as kind of lazy, but he’s never been considered an attitude problem. That can’t be it. I’m inclined to think that certain clubs feel they can always get a better deal. Upton’s been on the market for so long, GM’s are waiting for him to go on sale. The Rangers’ Jon Daniels has been linked to Upton for a couple months, reportedly trying to center a package around Mike Olt instead of the desired Elvis Andrus or Jurickson Profar. You need to give talent to get talent, and if I were Daniels, I’d be happy to get three years of Upton for Andrus (who only has two years of team control remaining. And he’s a Scott Boras client) and an overrated prospect like Martin Perez.