Ravens Continue on Road to Redemption

Next: knocking off Tom Brady and the Patriots. 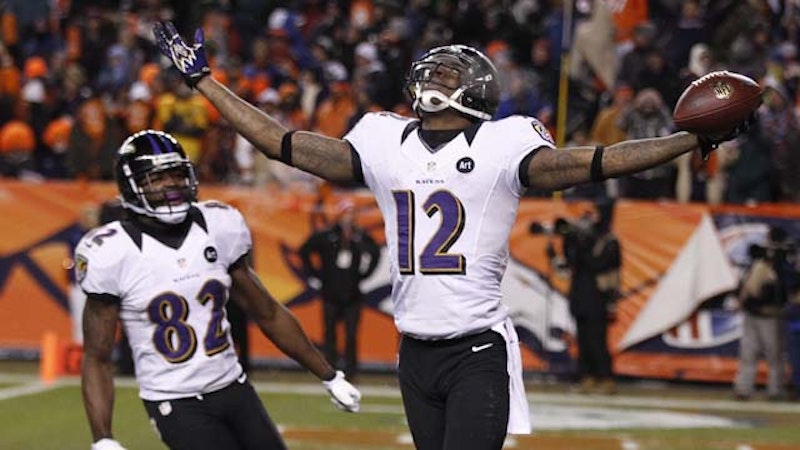 The Baltimore Ravens’ stunning victory in Denver on Saturday may go down in Baltimore history as the second greatest game ever played and will live on in the annals of NFL postseason lore. Whether history remembers Joe Flacco’s 70-yard touchdown bomb to Jacoby Jones as the Mile High Heave, the Flacco Fling, or the Raven Rainbow won’t matter nearly as much as the final score. The victory over Peyton Manning and the big bad Broncos has propelled the Ravens right back to the same spot they ended last season. Baltimore’s return trip to New England to tussle with the Patriots once again is the ultimate do-over.

The final seconds of last season’s AFC Championship game left Baltimore with an everlasting disdain for Billy Cundiff and Lee Evans, and the Ravens with an enormous chip on their shoulder. General Manager Ozzie Newsome scored big points with the fan base when he replaced Evans and Cundiff during the offseason with free agent WR Jacoby Jones and undrafted rookie kicker Justin Tucker. The performances of Jones (game-tying TD) and Tucker (game-winning overtime field goal) must’ve been very gratifying for Newsome and his front office. The win also gave Newsome a victory over long-time nemesis John Elway, who broke the hearts of Newsome and the Cleveland Browns in consecutive AFC title games in the late 1980s. There’s no love lost in Baltimore for Elway, the Colts first selection in the 1983 draft who refused to sign and forced a trade to Denver.

The team adopted the Super Bowl or bust mantra for the 2012 season. After a 9-2 record to start the season the Ravens fell on hard times down the stretch. Baltimore’s three-game losing streak eventually cost Offensive Coordinator Cam Cameron his job. Former Colts’ coach Jim Caldwell took the reins of the Ravens’ offense and the results have been spectacular. Baltimore suffered an embarrassing loss at home to the Broncos in Caldwell’s first game as coordinator. Flacco committed two turnovers and the team began the game with five consecutive three-and-outs. Since that first game against Denver the Flacco/Caldwell offense has been a juggernaut. The Ravens piled 33 points on the Giants in their week 16 victory, 24 against the Colts in the Wild Card game, and 35 on the Broncos’ top five defense on Saturday. In his last three games (I’m not counting the week 17 loss to the Bengals when Flacco was pulled in the first quarter) Flacco has thrown for 922 yards, seven touchdowns, and no interceptions.

The Ravens have taken the road to redemption this January. Baltimore first knocked off the Indianapolis Colts in the Wild Card round. After leaving Baltimore in the middle of the night in March, 1984 the Colts had added insult to injury with playoff wins over the Ravens in 2007 and 2010. The sight of the horseshoe still stirs strange emotions and Baltimore. The victory over Indianapolis may have finally settled the score, but no promises.

The Ravens followed up the win over the Colts with a trip to Denver to face Peyton Manning, owner of nine consecutive victories over Baltimore. The Ravens entered the game as a near double-digit underdog, and perhaps with good reason. In addition to Manning’s success against the Ravens the Broncos entered the game on an 11-game winning streak. The revamped line featuring the much-maligned Michael Oher at right tackle and season-long doghouse resident Bryant McKinnie at left tackle held the Denver pass rush at bay and gave Flacco the time needed to connect on long TD throws to Jones and Torrey Smith.

The Ravens dialed up the pressure on Manning in the second half forcing two turnovers which set up two scores, including Tucker’s game-winning field goal. Manning’s postseason record dropped to 9-11. Vanquishing the media darling Manning earned the Ravens another shot at NFL golden boy Tom Brady