When the Pack Comes Marching In 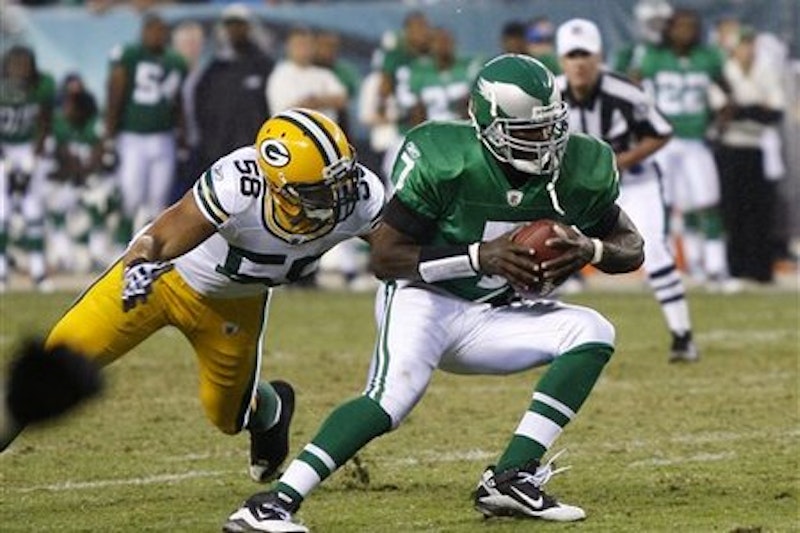 This weekend's NFL Wild Card weekend presents some interesting matchups for the viewing public. I was set to name the defending champs from New Orleans as my favorites to make it back-to-back Super Bowl appearances, but a funny thing happened on the way to Dallas: the Saints’ running backs are dropping like tank tops on Bourbon St. The team put Pierre Thomas and Chris Ivory on injured reserve earlier this week making them ineligible to appear in the playoffs. With its top two rushers out for the year New Orleans will need to rely on the washed up Julius Jones and the never-was Reggie Bush to keep defenses off Drew Brees. The Saints should have enough to get past the “We're just happy to be here” Seahawks on Saturday, but a return trip to the Super Bowl now seems unlikely.

The other NFC game features two 10-6 teams headed in opposite directions. Six weeks ago the Eagles were great, but they've dropped two straight and now Michael Vick is dogged by an injury. The Eagles will have the benefit of playing at home, but the Green Bay Packers come in riding two emphatic victories, a blowout of the Giants and an old fashioned slugfest with the hated Chicago Bears. Green Bay was a chic Super Bowl pick at the beginning of the season, but people seem to forget that Aaron Rodgers has as many playoff wins as Carson Palmer. That would be none. That said, I think Green Bay is the superior team. The Philly defense doesn't impress me and they have no consistent running game. The Andy Reid Eagles have never been able to run late in the game to convert short yardage situations. Shady McCoy is a great weapon out of the backfield, but he's not going to get many hard-earned first downs against the Pack. I'll take Green Bay to beat the Eagles this weekend, assuming the game isn't postponed due to snow flurries. I'll also take the Pack to upset the dormant Falcons in Atlanta next week. And despite my concern for the Saints running game I'll take them to go into Chicago and upset the number two seed Bears next weekend. Who ya got in a Brees vs. Cutler shootout? My point exactly. The Bears are counterfeit. Pack beats Saints to go to the Super Bowl.

In the AFC I'll take the Ravens over the Chiefs. Call me a homer if you like but the Chiefs are one-dimensional playoff virgins. The Ravens are well-traveled road warriors. Kansas City has had a great comeback season, making the playoffs for the first time since 2006, but a glance at their schedule reveals that they've amassed 10 wins by beating up on the little sisters of the poor, aka Denver, St. Louis and Buffalo. In fact the Chiefs don't have one win this year over a team that finished with a winning record. The game will probably be ugly, too close for comfort and decided by a late Ed Reed or Ray Lewis induced turnover.

The other AFC game features a rematch of the 2009 AFC Championship with the Colts and Jets squaring off. I predict a similar result. The Jets QB is the still green Mark Sanchez. The Colts will be at home and as always led by future HOFer Peyton Manning. Sanchez isn't beating Peyton. The Jets would need some miraculous combination of turnovers, special teams play, and Colts injuries to win on Saturday night. I don't see it.