The world number one has a new coach some call a “guru.” 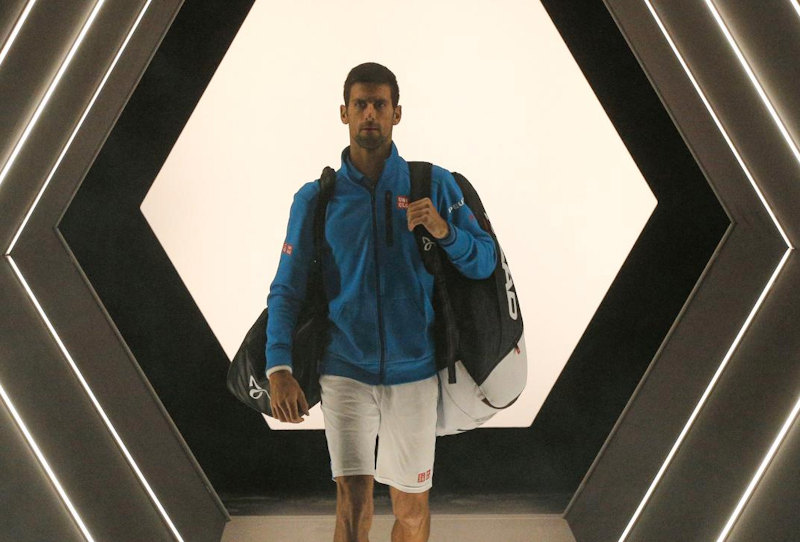 It’s getting interesting at the very top of men's professional tennis. When current world number one Novak Djokovic drew a heart in the red clay at Roland Garros stadium after taking the French Open title in June, he owned a 44-3 record for 2016, and led number two Andy Murray by 8,000 points in the world rankings. The Serbian sensation lost considerable steam in the second half of the season, however, capping off his frustration with an on-court meltdown at the Shanghai Masters event in October when he ripped his shirt in anger and smashed his racquet during his loss to Roberto Bautista Agut in the semi-finals.

World number two Andy Murray, on the other hand, has torn it up since the French. With a total of seven titles this year, including his second Wimbledon, the Scotsman is now in a position to capture the number one spot for the first time in his career if things go well at the Paris Masters tournament this weekend.

In a move that's causing heads to turn on the ATP tour, Djokovic is now shaking things up a bit on his team in search of recapturing his earlier form. While he’d originally scheduled his two regular coaches, tennis great Boris Becker and Marián Vajda, to accompany him to Paris, he’s decided to go with tennis coach/spiritual guru Pepe Imaz and his brother Marko Djokovic in his player box for the tournament.

Djokovic, who’s previously experimented with novel training methods and touts the merits of his gluten-free diet, yoga, and room temperature water (better for blood circulation), has created a buzz in the tennis world by enlisting the 42-year-old Imaz, a proponent of meditation and long hugs. Tampering with a winning formula is a dangerous game for a champion athlete. Removing Becker and Vajda from the equation at the very point when his top ranking is in jeopardy indicates he's looking for a serious change of course, regardless of risk.

Imaz, a former journeyman pro player, espouses a philosophy of “amor y paz”—love and peace. His Spanish tennis center, Pepe Imaz Tennis, is dedicated to helping players reach their highest professional level while giving “absolute priority to the person's well-being, feelings and emotions.” Its website explains that love for the game often disappears when a player turns pro, when it's replaced by fear, and the key is to “restore the love for the game and for oneself.”

Pretty new-age stuff for professional athletics, but Djokovic appears have arrived at a crossroads where he feels the path of enlightenment is the best route to recapturing his earlier form. “Nole,” as the 12-time Grand Slam winner is sometimes known, once talked about how marriage and fatherhood in 2014 brought holistic balance to his life.

Djokovic is pushing back against the media calling Imaz a “guru.” He doesn't want to seem flaky, even though he asked the fans in Toronto to hug each other after he claimed his fourth Rogers Cup this summer. At the press conference after his 6-3, 6-4 win in Paris on Wednesday against Gilles Muller, the media asked him about his relationship with the Spaniard, who watched the match wearing a shirt with a heart shape in the front. "I don't know where you heard that he's a guru," Djokovic replied. "He's been in tennis for all his life.”

Perhaps that idea came from the two-hour video that Djokovic appears in, entitled “Amor y Paz,” where Imaz—with his long, flowing hair and loose-fitting white cotton garb—addresses a spellbound gathering with a one-hour monologue while the tennis star sits still next to him, at one point placing a hand over his heart. When Djokovic finally takes the mic, he talks about trying to find the balance between work and family by speaking with yourself internally. “But not with your mind,” he stipulates. “With your soul and heart.”

Djokovic recently said that regaining his desire on the tennis court and enjoying himself—not winning Grand Slams—is his priority. At 29, with 12 Grand Slams to his name, he has a good shot at matching Roger Federer's total of 17 if he can find his way through this career “thicket.” For now, he's chosen Imaz’ peace and love route over Boris “Boom Boom” Becker’s hardass Teutonic approach.