Usual sportspourri of distractions goes rancid in a hurry. 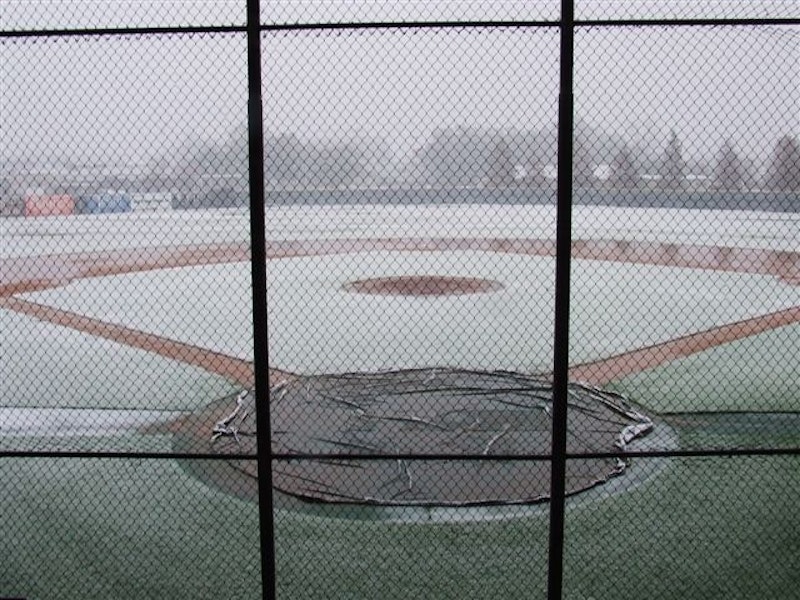 The baseball methadone comes in many forms this time of year. Hockey is prescribed in gelcaps, international soccer is a liquid suspension and there’s the occasional poultice of mid-major college basketball. All are helpful in navigating the sullen molasses hopscotch of distractions intent on shedding baseball’s offseason as hastily as possible. Through the gray gloom and piled snow that signpost will appear up ahead as it always does splattered with whitetail platelets and it says: Spring Training. Casual fans will tout the mythical “pitchers and catchers” in early February, the experts will dust off their boilerplate and pick the Cubs to win it all and another new statistic will be introduced to measure each player’s macro-level of MLB greatness.

As for the distractions, it appears the New York Rangers are peaking too soon, piling up wins to reach the top of the NHL pile. Qualification for the 2018 World Cup Soccer tourney has shifted into an extended final stage for the suddenly shambolic U.S. squad and its troubled German coach.

Next year the Spring warm-ups will again be interrupted by the dorky kid on the block known as the World Baseball Classic, MLB’s self-mocking marketing arm aimed at spreading the game to all corners of the earth and selling ugly merchandise along the way. Current major leaguers are encouraged to scour their family trees for any foreign country roots which will earn them a spot on one of 16 international teams trying to beat Japan for a trophy of some kind. Most players view the every-four-years tournament as jury duty at this point.

The X-factor in all this, especially the U.S. men’s soccer team aiming to make the World Cup to be hosted by Russia in the summer of 2018, is that the former owner of the United States Football League New Jersey Generals was elected 45th President of the United States shortly after All Saints Day. Playing in the CONCACAF Hexagonal (try explaining that to a distracted bartender searching in vain for the BeIN Sports cable channel on the house TV) the U.S. is battling Mexico, Costa Rica, Honduras, Trinidad & Tobago, and Panama for three automatic invites to Putin’s Footy Party. The fourth-place team in the Hexagonal will have a play-off against an Asian squad also struggling to qualify for a few days in some crappy hotel in Volgograd.

Needless to say, in the wake of the presidential election, the U.S. played horrific soccer in a 2-1 loss to Mexico in Columbus, Ohio (the basket-weaving capital for those seemingly countless Deplorables) and a 4-0 drubbing at Costa Rica. The players now return to their club teams scattered across the European Union and the Americas, so the national team won’t play another qualifier until March. That’s the challenge for head coach Jurgen Klinsmann—to assemble and then reassemble an all-star team of sorts every few months and hope his player personnel gels in time to put up some points. It’s a tall order, given the personalities (or lack thereof) on the current crop of U.S. foot fairies. Some have posited the U.S. won’t need to qualify for Russia since the new Commander in Chief has got the juice over there to get us in. Red ballcaps will be distributed with the slogan “Make the US National Team Great Again” and perhaps Klinsmann will be replaced with Mike Ditka?

In a country obsessed with “firing” people, the soccer press and most fans are demanding Klinsmann be dismissed immediately, as if it was the coach himself who allowed Costa Rican players to waltz into the U.S. goalmouth and embarrass Brad Guzan time and again. The team has lost its fight and chemistry because Father Time has taken his toll on the absent Clint Dempsey, which should make all of us feel old.

Don’t try to turn to our own little soccer league for solace. Canada has co-opted the lousy Major League Soccer postseason with Toronto and Montreal eliminating teams from the east coast liberal elite sector. The rest is Colorado and Seattle so let’s hope the MLS Cup heads north of the border like many of the Hollywood celebrities promised they would pending the wrong outcome of the election.

To add to the depression, DraftKings was finally legalized in my home state thanks to the efforts of future U.S. President and Albany Corruption Enabler Andrew Cuomo. DraftKings has a lure-you-in algorithm that makes you think that odd man out Toronto Maple Leaf you drafted off the bench is only shared by eight percent of the rest of the bettors. So this Maple Leaf has the game of his life and you still somehow finish 68th out of 125 players and therefore out of the money. Plus, the dudes in the DraftKings commercials are hideous cartoons of jacked-up sports bar Cro-Magnons and you do not want to be that guy.

Also to be avoided is the petty pissing matches that go along with baseball’s “awards.” I gave up on this stuff as a kid when Willie Stargell was forced to share the NL MVP with an obscenity in tight pants known as Keith Hernandez. Now we’re served high-tech feedback from the likes of Kate Upton, who sent an “X-rated” Tweet to MLB because her fiancé Justin Verlander didn’t win the American League Cy Young Award. She even singled out the writers in Tampa who did not put Justin first and demanded MLB “fire” those writers. Okay Kate, we know The Apprentice is now part of our collective national reality, but swimsuit models have a questionable skillset when it comes to shitcanning journalists. Leave that to the professionals, please, and then you can join the chorus complaining that there are no more professionals.

The weekend shows promise. New York University’s club hockey team is visiting the Marist Red Foxes in Poughkeepsie for a Saturday matinee. Nothing can soothe the savage soul like Zamboni fumes.