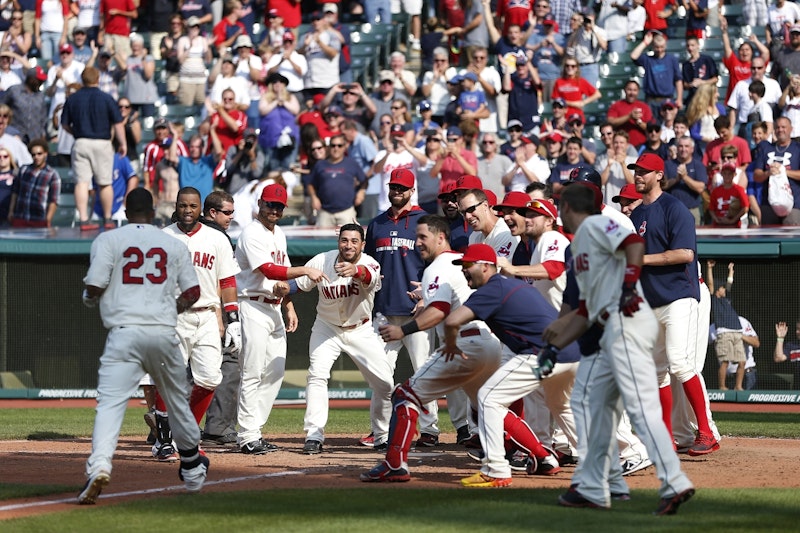 On the eve of another World Series without the Pirates involved, it’s time to prepare a Listicle Template for all the online writers out there forced to weigh in on the proceedings. Outside the stadium walls (though both Chicago and Cleveland’s teams play at a “field”) there are nostalgia-crazed juntas jockeying for position between two Great Lakes that nobody on either US coast can name. For the next week or so, Indiana will be the flyover state, though twee Cubs manager Joe Maddon might do something “zany” like buy an El Camino and commute to Cleveland by car. Which brings us to our first match-up:

Bill Murray vs. Drew Carey: Both have become slightly creepy, though Murray still flies solo in the Wrigley seats and Carey is off hosting some gameshow and is more into soccer anyway. Murray has the Carl the Greenskeeper creds going for him, as well as the Mark Twain Award for being a six-term Mayor of Kooksville. Which is nice. Advantage Murray and the Cubs.

Dead Boys vs. Urge Overkill: Cleveland’s Dead Boys were the Murderer’s Row of early punk rock and they win hands down every time over Chicago’s glam-irony outfit Urge Overkill. I’ll even thrown in Ministry to help them out and they still lose to Stiv Bators and his lads from Cleveland. Advantage Dead Boys and the Indians.

LeBron James vs. Michael Jordan: This is one to let the wonks on ESPN radio settle. Jordan couldn’t hit the curve, but at least he tried. I wouldn’t want to pitch to James even using Donn Pall’s arm. But LeBron would never pull a bullshit move like announcing his retirement in a private box at the stadium during the White Sox vs Toronto ALCS in 1993, a distraction that killed the Southside mojo. Advantage LeBron James and the Indians.

Lake Michigan vs. Lake Erie: Gordon Lightfoot never wrote a song about either of them. Push.

Disco Demolition vs. 10-Cent Beer Night: This is, as Steve Blass would say, when we get down to cases. The discount beer night at Cleveland Stadium that turned into a full-scale fan riot was more spontaneous and happened in the summer of 1974. That is a full five years before the July 1979 disco record sacrifice involving half-assed fireworks and an overmatched police force at Comiskey Park. Both brilliant events marked the Boozy Baseball Epoch that was the 1970s. Advantage to Stroh’s beer served in Cleveland and, of course, the Indians.

Good Times vs. Hope & Faith: Jimmy JJ Walker, aka Kid Dyn-O-Mite showed us what life in the Chicago housing projects was all about on this All in the Family spinoff with its legendary opening theme song. Hope & Faith was a mealy-mouthed Kelly Ripa TV drama set in Cleveland for a few forgettable seasons on ABC in the early 2000s. Advantage big time to Good Times and the easy-credit rip-off Cubs.

Ghoulardi vs. Svengoolie: Late night horror movie show hosts were big in the 1960s and '70s especially in the Midwest. Chicago had Svengoolie, with his top hat and coffin-laden set, while Clevelanders enjoyed Ghoulardi, a counterculturalist using flashlights to illuminate his rather primitive productions. Ghoulardi was more of a '60s guy, while Svengoolie came later, no doubt stealing half of his material from the Clevelander. Advantage Svengoolie (with his exceptional make-up) and the Cubs.

Euclid Tavern vs. Rainbo Club: It doesn’t matter that Michael J. Fox and Joan Jett did that rock ‘n’ roll movie set in the iconic Cleveland rock bar the Euclid Tavern. Chicago’s trendy Rainbo Club is much prettier, of course, with a revolving display of post-Williamsburg pre-Liz Phair hipster couples. The same neon guy probably worked on both signs for these exceptional joints. I’ll take a buyback on this one and call it a push.

Studs Terkel vs. Harvey Pekar: Though Louis “Studs” Terkel was born in New York City, he was known as a Chicago radio genius, wearing gingham shirts and interviewing working people and telling their stories. He lived well into his 90s and was certainly an American icon as a man of letters. Pekar, on the other hand, mined the depths of the underground comics world and made memorable appearances on The Late Show With David Letterman. He was the Cuyahoga County everyman, of sorts, friendless and bound for American Splendor glory. This is yet another Chicago-Cleveland push.

DePaul University vs. Case Western Reserve University: (Terkel was a University of Chicago graduate, so DePaul will step in to represent Chicago in this battle.) In 1982, when Ohio University upset DePaul in college basketball in double overtime on Valentine’s Day in Athens, Ohio, I was among the horde of fans who stormed the court in celebration. I’ll never forget the scared look on DePaul coach Ray Meyer’s face. He was frightened, yet owl-like. A True Chicagoan. My older sister went to Case Western, which is in a “bad neighborhood” in Cleveland. She drove a beat-up AMC Hornet which was actually car-jacked early in her freshman year. She said it wasn’t clear whether the thief wanted her car or the groceries she had in it. Case now has a Frank Gehry building on its campus. Advantage Case Western and the Indians.

John Wayne Gacy vs. Ralphie from A Christmas Story: The 1983 movie about the kid from Cleveland who wanted an air-rifle for Christmas has put fishnet leg-lamps in the homes of every aging Gen Xer across the land. The proliferation of “scary clowns” of late keeps hipster serial-killer worship alive and franchised in the form of Chicago-born monster John Wayne Gacy. Unfortunately, there are thousands of kids out there who will remember Brian Dennehy not for his brilliant Willy Loman role on Broadway, but instead for his portrayal of Gacy in the made-for-TV To Catch a Killer. Advantage Ralphie and the Indians and their fans who’ll have a pleasant winter ahead of them with a world championship trophy lingering—as the great Cleveland announcer Tom Hamilton puts it—“at the corner of Carnegie and Ontario.”