Build a wall around McCutchen trade rumors. I’ll pay for it. 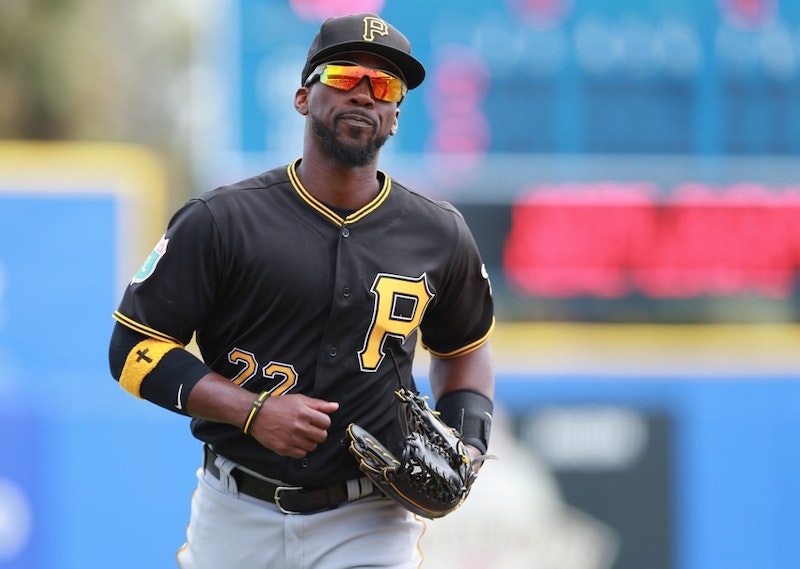 So many times during the dreadful election “season” I heard people say “I can’t watch the news anymore. I can’t even turn it on.” I’m now reflecting that same response when it comes to the baseball offseason as the Winter Meetings approach and deals are supposedly made in good faith. Every day, thanks to the Internet’s 10-second news cycle in which “bloggers” are forced to update their sites with supposedly not-fake news to meet the demands of dorks hitting the refresh button every 30 minutes on a Sunday in November, I’ve had to read the brutal headline “Pirates still shopping Andrew McCutchen.” Enough already.

If you can’t update the story, shut it down.

This endless speculation takes the fun out of the game and the wind out of your sails if you’re a baseball fanatic over the age of 43.573. McCutchen represents the turnaround of an historic franchise, a new energy that was grown from within the organization and met every demand, every need, every media request, every expectation for the past seven seasons. His 2016 campaign was disappointing, yes, but was it bad enough to write him off and ship him away to Los Angeles or Toronto? This is a former MVP who was signed to a nice long-term deal and was King of Pittsburgh, the face of the franchise, the spiritual base of a team that after 20 consecutive losing seasons suddenly had swagger and dugout dances and the blessings of a fanbase that has not always warmed up to superstar black ballplayers.

Now, thanks to chattering online nabobs, McCutchen is throw-away trade bait and the speculation the Buccos are going to take less than they should to send him away and good riddance, etc. These are the same people who believe in the bullshit stat called WAR which somehow translates into “value over a replacement player.” True fans don’t give a crap about a “replacement player” or the AAA equivalent of the big league starter. The fact is, with the preponderance of fan-killing stat categories and mathematic slight-of-hand, the sabremetric crowd is now a baseball version of the Heaven’s Gate cult, only without the five-dollar bill and roll of quarters. As Captain James T. Kirk reminded Mr. Spock on more than one occasion, there’s nothing wrong with having emotions when you are hurtling through the final frontier.

God forbid I even mention that fans once relied on the weekly Sporting News or USA Today or some other print source hinting at deals and trade rumors. Now it’s every 10 seconds with nerds cut-and-pasting Twitter drivel from Jon Heyman or Buster Olney or some of the other multi-employed, over-extended pablum-spouting “sources” feeding the insane cycle with rumors from some geek assistant GM that the cell phone rang in the middle of the night and McCutchen’s name was mentioned. Again.

I adore these fan websites and bloggers during the season but in the offseason when branches are bare, they still think they need to post updates daily. And they’ve got nothing but the same repetitive speculation. It’s depressing to witness this and be reminded that loyalty is outdated and actually laughed at in many cases and what if Joe L. Brown had tried to trade Willie Stargell every time he had an offensive hiccup or was somehow deemed unworthy of his contract? That is how much McCutchen means to this team. And the contract analysis is equally annoying, as if every one of these Internet geeks is some labor attorney or a shotgun-toting Pinkerton thug from John Sayles’ Matewan. Has fantasy sports so warped everyone’s reality that they need to sweat every last dollar spent on every last bench player or superstar as if it was their very own currency? That’s the joke. When a fan uses the word “overspend” I laugh in their face. The owners with any integrity have the eternal mission of putting the best damn team on the field. Who cares about price tags? Let them spend their piles of unreported wealth on making us happy with wins. Now. This season. Not five years down the road, which was the eternal promise for so many small market teams through the years.

“Five year plan” was always translated into one big foam middle finger in the face of diehards who believe in the system. More than once I had Spring Training ushers shushing me as I screamed at Pirates ownership walking through the sunny ballpark to spend some money on the team. Simple request. I’ve got my ticket, my beer, my souvenirs. I’ve got my brothers and sisters beside me and we want this proud franchise to win, so, Mr. Nutting (who very few others recognized) buy your ticket, your beer, your souvenir and let’s have some winning around here! It was not too much to ask, I reminded the ushers, who let me stay. There was a spark of revolution as it dawned on my seatmates that the owner was only a few rows away and you can let fly with your opinions and demands and most definitely be heard.

Pirates fans have been sold for years on prospects blooming. McCutchen’s the prime example, followed by Starling Marte and Gregory Polanco. We’ve got more on the horizon due to some keen drafting, but it seems so absurd to give up on McCutchen so quickly. Either the hourly trade rumors are meant to light a motivational fire underneath the recently-married McCutchen, or they’ll simply discourage the other blue chips from thinking they have a future in black-and-gold. And we don’t want that to happen to Josh Bell or Adam Frazier or Eric Wood or Austin Meadows or Tyler Glasnow. With the backdrop of the grotesque Yoenis Cespedes deal from the Mets and the Cubs’ deep pockets reaching Los Angeles Dodgers “b-word” levels (as in one billion in player spending in the past four years), there’s still extreme economic disparity in MLB, lest anyone forget. There always will be.

The McCutchen Question also reminds me of the months of media constipation preceding the Yankees acquisition of Chuck Knoblauch in February of 1998. Imagine the Internet and requisite social media being up and running at that time? New Yorkers would be drowning in trivia and minutiae regarding the man whose last name is also the German word for garlic.

All I want for Christmas, then, is number 22 somewhere in the Bucco outfield, with all this trade talk rendered nothing but subterfuge as he returns to form as one of the game’s most exciting players of the past decade.