It’s time for the Redskins to use common sense. 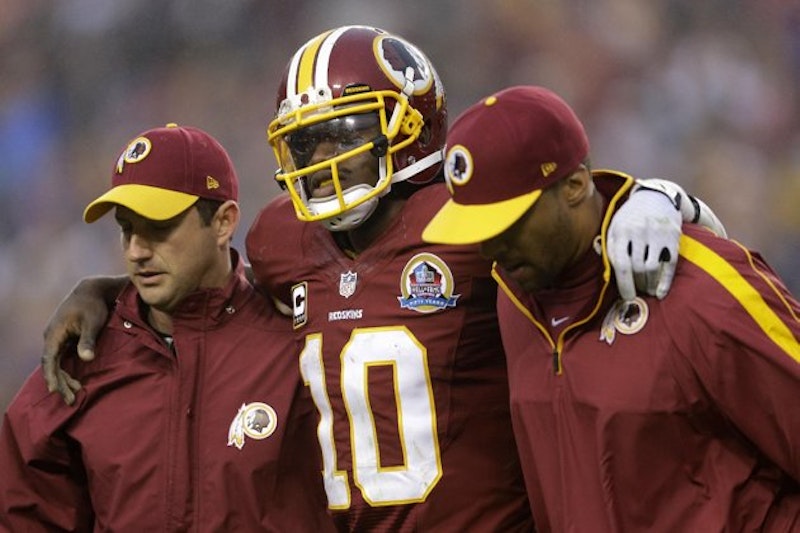 Despite chronicling the Washington Redskins’ season in this space, I’ve resisted writing about the team since their playoff loss to Seattle 10 days ago. I didn’t think too hard about why. I just assumed it was because, as a fan, I was depressed about the loss and didn’t want to dwell on it.

It wasn’t just that though. There’s no shame in losing in the playoffs when the franchise hasn’t been there since 1999. Mostly I didn’t want to think about the way it happened. I’m not referring to blowing a 14-0 lead at home. That’s terrible for any fan, but hardly significant in the long term. I’m referring to the serious injury of star rookie quarterback Robert Griffin, III, and that he kept playing for half the game until getting removed in the fourth quarter. Anyone who watched Griffin play the second and third quarter had to wonder why he was still in the game.

That was the thing I didn’t want to think about. I didn’t want to face the fact that maybe the team I root for is stupid. Bad roster decisions and wasted draft picks are one thing, but leaving an injured franchise quarterback in the game might just be the dumbest, most self-defeating moment of the last decade in pro sports. And that’s saying something.

Making the playoffs was great, as was winning seven straight to get there, but for the Redskins to do anything long term, they’re going to have to maximize Griffin’s talents. They won’t be able to do that if Griffin can’t play, or gets injured so frequently that he becomes compromised physically. That might sound far-fetched, but consider that Griffin played in parts of 16 games (he missed one due to injury) and injured his knee three separate times.

A season ago I thought the question the Redskins would face after this season was determining if Griffin is good enough to be the long-term answer at quarterback. Now that seems silly. We know Griffin is good enough. Now the question is, are the Redskins smart enough to do what it takes to keep the centerpiece of their franchise safe? The early returns on that one aren’t good.

Thanks to his three knee injuries, Griffin is facing his second total knee reconstruction in the last four years. The prognoses are all over the board. Some people think he’ll be back and 100 percent by training camp. Others believe he’ll miss some significant amount of time and have to begin play next season sometime in the middle of the year. There is also a chance that Griffin’s trademark sprinter speed (seriously; dude ran a 4.4 40 yard dash in college) could be gone when he returns. That would be a tough loss to take, but it wouldn’t signal the end of Griffin as a premium player in the NFL. That is unless the Redskins insist that he keep running like he did this season.

This season Griffin ran twice as much as any quarterback in the NFL. The Redskins reaped the rewards as Griffin averaged an inhuman 6.8 yards per carry, 0.8 yards more than anyone else at any position (Adrian Peterson was next at an even six). The Redskins don’t have to lose that weapon entirely (assuming Griffin is healthy enough to continue running next season) but they must scale back on those designed runs.

Also, Griffin has to be smarter. In one sense his speed is a blessing, but in another it provides a false sense of security. On the play where all the bad news began, a run against the Ravens weeks ago, Griffin was nearing out of bounds. He could have just run out and tossed the ball to the officials and run the next play, but that’s not how he thinks. Instead he turned back towards the middle of the field and was met squarely by a Baltimore nose tackle. It was a preventable injury. There is just too much riding on his health to risk an extra few yards and part of the Redskins’ job now is to convince him of that fact.

The Redskins themselves will also have to be smarter. They’ll have to call fewer designed run plays to reduce the risk of injury, but more than that, they’ll have to monitor Griffin for injury and if he’s injured, remove him from the game. Perhaps that’s the most galling part. This was the Redskins taking their most valuable possession, and playing back-yard tackle football with him. And he cracked.

The only thing the Redskins can do is learn from the mistakes in handling Griffin this season. If they don’t this will happen again, and it’ll be worse, possibly destroying the career of the brightest star the team has seen in decades. I guess that’s what I was dreading thinking about.