Nick Kyrgios is the Punk Rocker Of Tennis

He's the game's most polarizing figure. 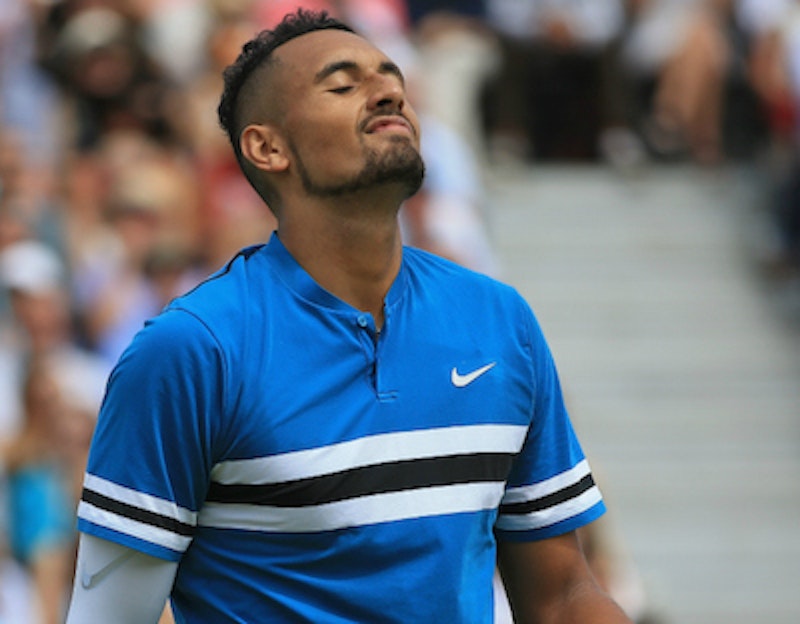 “Is Nick Kyrgios good for tennis?” That's a question often bandied about in the tennis world. Why would a young phenom with such preternatural talent be doubted in this way? The question’s only posed because the brash brat from Canberra hasn't won any major tournaments yet. When you reach the top, as John McEnroe once demonstrated, your bad temperament transforms overnight from a liability into a star with “personality”—pure box office gold. Fail to scale the mountain, however, and you fall back into the pit with all the other wasted talent and their self-defeating ways.

The divide over Kyrgios resembles a generation gap. Younger tennis fans are tuned in to his frequency. They welcome him as a breath of fresh air—a spontaneous on-court genius oblivious to what people think about him. Kyrgios always gives them their money's worth. Well, not always. He's tanked at least eight matches in his pro career, which has at times made him look like a petulant millionaire quitter who can't handle adversity. This sin’s much harder to forgive than his temper tantrums In the heat of battle. McEnroe never gave up.

On Saturday, tennis’ resident bad boy (world number 72 pre-tournament) captured his fifth ATP title at the Mexican Open in Acapulco with a defeat of the player he may well be competing against in the finals of future major tournaments, 21-year-old Alexander Zverev, ranked number three in the world. On the way to the Acapulco title, the Aussie of Malaysian and Greek descent battled with fans (“Fuck you,” he said to one taunter) while taking out Rafa Nadal (world number two), three-time Grand Slam winner Stan Wawrinka, and ninth-ranked John Isner. Perhaps the jet skiing he did before his finals matchup with Zverev put him in a relaxed state of mind. The devil-may-care attitude towards match preparation certainly distinguishes him from the pack.

There was controversy during the match with Nadal because... Kyrgios was playing. The Spanish great was standing way behind the baseline in order to return his opponent’s cannonball serve, so Kyrgios decided to go with an underhand dink serve. Nadal, offended by a violation of an “unwritten tennis rule,” later said that tennis’ enfant terrible lacked “respect for the public, the opponent and toward himself,” even though Kyrgios didn't even win that service point. But Rafa’s cheap shot was just the petulance of a loser. Tennis isn't baseball—it has no unwritten rules. The dink serve is as legitimate a tactic as standing way behind the baseline to return serve is—both are done to gain an advantage over the opponent. Even Roger Federer came to Kyrgios’ defense on this matter.

Stan Wawrinka crushed a fearsome forehand in Acapulco, to which Kyrgios replied with a slapped forehand that was almost too fast for the eye to follow. It was like he was swatting a ping pong ball. Even Wawrinka—who Kyrgios once informed, mid-match, “Kokkinakis [Greek player Thanasi Kokkinakis] banged your girlfriend. Sorry to tell you, mate”—had to applaud that impossible shot.

Kyrgios’ punk-rock style hasn't endeared him to traditional Aussie tennis fans who still remember the gentlemanly comportment of players like Rod Laver, John Newcombe, and Ken Rosewall back in the era of Australian hegemonic control over the sport. Rosewall, who earned nary a cent for winning his first four Grand Slam titles in the 1950s, has pointed out that the new crop of Aussie players lacks discipline because they've earned too much money early in their careers. It's hard to dispute that point, but Kyrgios still has plenty of time to prove him wrong. For his countryman Bernard Tomic, however, that ship has probably already sailed.

Discipline’s an issue for Kyrgios, as are conditioning and maturity. Without a coach currently, which has been the status quo for most of his career, presents another challenge, but having a coach is tricky when there's nothing you hate more than being told what to do.

Nick Kyrgios is a tease. He'll flash a little leg, but he won't give it up. Tennis comes too easy to him, but he hasn't yet learned to respect his gift. He’ll display his talent like he did down in Acapulco, and then revert to his underachieving ways. A tennis aficionado can only salivate over the prospect of him training more than four days a week, stretching properly, and eating right. If he could hold his concentration when playing low-ranking players, that would be helpful too.

The answer to the silly question is, “Yes, Nick Kyrgios is good for tennis.” He's probably the most talented player since Roger Federer. And lately he's been showing signs of maturity, talking about the need for discipline and hiring a coach. With his combination of flair, spontaneity, and striking looks, Kyrgios would be a spectacular world number one. To get there he'll have to defeat his own worst enemy—himself—and learn to love the game that he’s ambiguous about.