Where are the MLB's Rookies of the Year?

Looks like no one's going to be the next Darrell Strawberry. 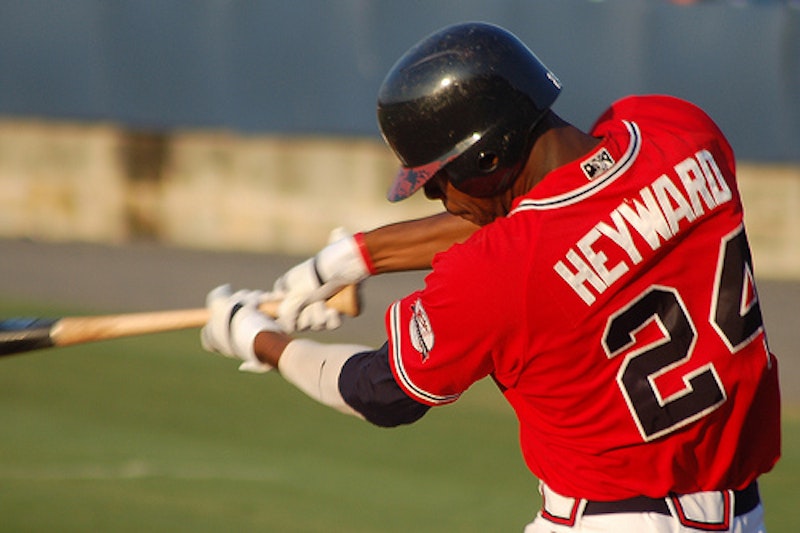 At the start of the Major League Baseball season I predicted Braves OF Jason Heyward and Orioles LHP Brian Matusz would be the Rookies of the Year. As the season reaches its final weekend it looks like I may have gone 0-2. The Heyward hype started in Spring Training as he bounced gopher balls off Escalades and Hummers during BP. He was dubbed “The Next Darryl Strawberry” about 28 years after Strawberry was called “The Black Ted Williams.” (Incidentally, Josh Hamilton has emerged as the bizarro Strawberry. Darryl was a stud prospect who put up huge numbers before succumbing to cocaine and seeing his career go down the drain. Hamilton was a top prospect who was derailed by heroin addiction before ever reaching the Major Leagues only to recover to be the likely winner of the AL MVP.)

Heyward may not have totally lived up to the hype, but he has been remarkably productive for a 20-year-old. He's posted 18 homers, 71 RBI and a very impressive 89 walks. The Braves, barring a weekend collapse, will make the postseason as the Wild Card. Heyward has been an important piece of the Braves puzzle, but he's been overshadowed as by Buster Posey and the Giants' assault on the Padres.

Posey has put up similar numbers to Heyward (.313/. 365. /511, 17 HR, 66 RBI) but he's done so as the catcher for the hottest pitching staff this side of Philly. Posey has also hit cleanup in San Francisco’s lineup. If I had a vote I'd put Posey at the top of my NL ROY ballot, with Heyward a very close second.

The young talent in the National League doesn't end there. The Cubs Starlin Castro looks like a mainstay at SS on the Northside for years to come and Tyler Colvin leads all rookies with 18 homers. The Marlins have Gaby Sanchez and Mike Stanton as productive offensive players. Like Heyward, Stanton and Castro are just 20 years old. I haven't even mentioned the best rookie pitcher in the league; Jamie Garcia of the Cardinals has a record of 13-8, 2.70 and has proven to be an impressive compliment to Adam Wainwright and Chris Carpenter.

In the American League Rangers closer Neftali Feliz is the clear-cut choice as the top rookie. Feliz may also be the MVP of the surprising AL West Champs. Backed by a 100 MPH fastball, Neftali has saved 39 games this season with an absurd WHIP of 0.89 and 71 strikeouts in 68 innings. He was an AL All Star and appears to be a shoe-in for ROY.

Tigers outfielders Austin Jackson and Brennan Boesch are the AL's two best rookie batters. Boesch burst onto the scene in May tearing the cover off the ball for a solid six-eight weeks. He came back to earth as the dog days set in, but still leads all AL rookies in homers and RBI. Jackson came to the Tigers as the centerpiece of the Curtis Granderson deal with the Yankees. In retrospect, it looks like the Tigers got the better end of the deal. Jackson has played an excellent CF for Detroit and been a reliable leadoff hitter with a .349 OBP, 102 runs scored and 26 steals. The Yankees paid Granderson $6 million this season while the Tigers paid his replacement just $400,000.

Brian Matusz, my preseason pick, struggled immensely in the first half of the season. He's turned the corner, just like the rest of the Orioles, since the hiring of Buck Showalter. Matusz has been the O's best pitcher over the past two months and has a chance to finish the season with 10 wins and a sub 4.50 ERA. Those are solid numbers considering his tough start and the daily grind of pitching in the AL East.