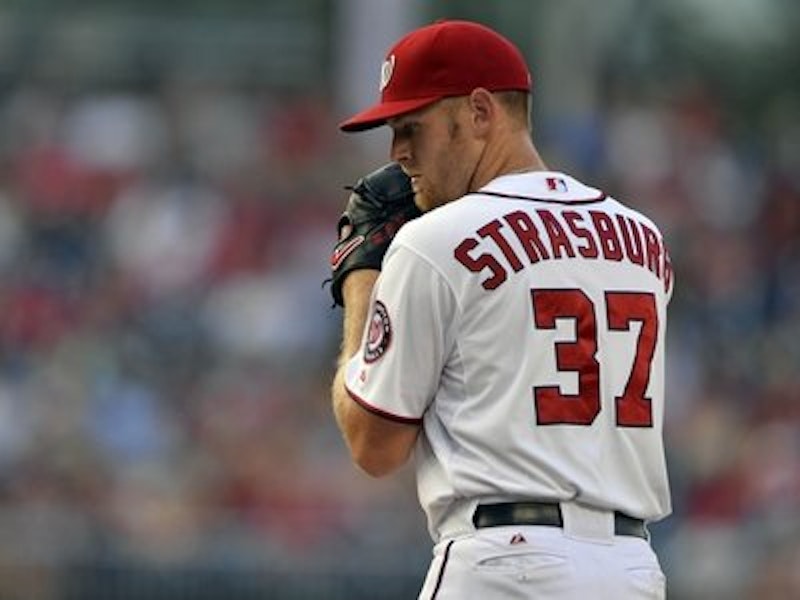 Washington Nationals: Everything is looking up for the Nationals with Stephen Strasburg back to form, Max Scherzer being Max Scherzer, and Tanner Roark’s breakout season in 2016. The Nats’ starting pitching is its greatest strength with Joe Ross and Gio Gonzalez rounding out the rotation. Strasburg has looked so good and is now healthy, after being on the DL to finish out 2016, that he’s usurped Scherzer as the Opening Day starter, something Strasburg did for the Nats from 2012-2015 before they signed Scherzer to his monumental contract. Despite all being right in the world for Dusty Baker and the Nats, the biggest question lies with two of the most intriguing young players in the league.

1. It’s strange to say when talking about a 24-year-old, but with the disparity between Bryce Harper’s dominating play in 2015 and his lackluster numbers, in comparison, of 2016, which Harper will show up in 2017? This question is, of course, insane. He still hit 24 home runs last year. Still, it’s the biggest question for a team that should be considered the frontrunner to win the NL East.

2. With all that’ll be written about this rotation as the Nationals’ strength, the other question looming will be on their other homegrown young talent: Strasburg. We’ve established that he looks healthy and poised for a bounceback season. The question will be, can Strasburg stay healthy? Without him in the rotation come October, the Nationals will struggle in any five- or seven-game series without a dominant one-two punch in their rotation.

New York Mets: The Mets return for what could be another solid year for the franchise that’s hoping for a third straight post-season run this October. After taking the pennant in 2015, the Mets lost the Wild Card game in heartbreaking fashion to the San Francisco Giants in 2016. Last year was certainly full of expectations that weren’t met: from not taking the NL East crown to unceremoniously losing when their best relief pitcher gave up a home run to a guy who started the season in the minor leagues. This year the most exciting rotation in baseball will be pitching in Citi Field. Yet, the juicy story of the spring has been Tim Tebow’s attempt to play baseball. The Mets decided to send him down to the Gulf Coast League where he’ll play for the Columbia Fireflies and everyone can now discuss the real questions regarding what the Mets will do in 2017.

1. Spring training has seen Brandon Nimmo, Jay Bruce, Juan Lagares, and Steven Matz all come down with injuries. None of these injuries are much to worry about… yet. For the Mets to win and stay competitive they’ll need their big bats and big arms to stay healthy, which leads us to ask, can the Mets get healthy and stay healthy for an October run?

2. Matt Harvey is no longer needed to be the ace of the rotation. That responsibility now rests on the shoulders of Noah Syndegaard, but Harvey’s pitching will have the distinct possibility of dictating whether the Mets are playing in October. Can Harvey return to his 2015 form or will he continue struggle as he did before he opted for season ending surgery in 2016?

Miami Marlins: Miami was due for a bounceback season this year before the Jose Fernandez tragedy that dealt this franchise the most brutal blow in its short history. Without Fernandez, quite possibly the most promising pitcher in baseball before his death, the Marlins lack a true ace on their staff and have tapped the 12-year veteran Edinson Volquez for the role as he now joins his seventh team. That said, there’s plenty of young talent for the Don Mattingly-managed Marlins. Their outfield’s potential is arguably the best in baseball with Marcell Ozuna, Christian Yellich, and Giancarlo Stanton at the core of their offense. The Marlins’ young offensive talent will be the most intriguing aspect of this team. In the end, the starting rotation for the Marlins is nothing to get excited about, but their bullpen and young offense should carry this team this year. This makes them a team to watch with no expectations. Mattingly as their manager is a big question mark in and of itself with his inconsistency with young talent in the past. Still, this is not the biggest question surrounding the Marlins’ 2017 campaign.

1. Twelve years in baseball is an entire career for most starting pitchers. Typically, you’d look to a starter with that kind of mileage to be a number four or five starter to round out a solid rotation. Can Edinson Volquez truly be an ace and the leader of this lackluster rotation?

2. Though this outfield might be one of the best in baseball, the lineup is made up of mostly young prospects. With young talent comes plenty of downside if they fail to meet their potential this year. Remember, in the NL East the Marlins will have to play both the Nationals and the Mets… a lot. Can this lineup meet its potential in a division where they will face three of the top five pitchers in baseball regularly?

Atlanta Braves: Either GM John Coppolella knows something that the rest of baseball doesn’t or new manager Brian Snitker will wait until 2018, when their top prospects Dansby Swanson and Ozzie Albies will be ready to secure the middle of the infield and lefties Kolby Allard and Max Fried are closer to big-league ready. The new SunTrust Park sounds more like a place where I’d take my dachshund for a playdate with a keeshond than a professional baseball stadium, but that’s neither here nor there. The Braves start the season with a rotation rounded out by two of the oldest starting pitchers in baseball, Bartolo Colon and R.A. Dickey, juxtaposed with two of the younger and more exciting starters, Mike Foltynewicz and Julio Teheran. Matt Kemp joins the Braves for his first full season. The 32-year-old looks to bounce back after a few years in cavernous Petco Park. The lineup is a mishmash of unproven young talent like Swanson and solid but uninspiring veterans who are clearly past their prime. Given a year or two, the Braves could develop into a solid team under the leadership of Kemp and the right coaching staff.

1. Colon and Dickey are a combined 83 years old and over 30 years of experience pitching in Major League Baseball. That’s amazing, but can they defy time and logic to remain competitive starting pitchers throughout the 2017 season?

2. The Braves are stacked with inferior talent, between overpriced veterans and unproven young players. This team is not one that many would be willing to lead. Will Snitker, the manager least likely to be recognized in public, be the Braves manager for the entirety or even beyond the 2017 season?

Philadelphia Phillies: The Phillies are finally focused on the future and have let go of the glory days of the late aughts. Ryan Howard, the last member of the Phillies World Series team, is gone and there’s plenty of young talent and rookies to watch out for this year. Most will start in the minor leagues for Triple-A Lehigh Valley, like JP Crawford, Roman Quinn, Rhys Hoskins, Jorge Alfaro, Dylan Cozens, Ben Lively, Mark Appel, and Nick Pivetta. Then there’s the fact that Fredi Gonzalez went from managing one of the worst teams in the NL East to managing one of the worst teams in the NL East. The expectations in Philadelphia are modest, but Phillies fans enjoy getting angry, so the fans’ interior battle between high hopes and boos will be interesting to watch. This is, like other Philadelphia pro sports franchises as of late, a “Trust the Process” kind of year. The rotation has two intriguing young starters in Aaron Nola and Vincent Velasquez. Nola’s first half was stellar before he wore down. Velasquez may be a strikeout leader, if he can manage to stay healthy.

1. Third baseman Maikel Franco will most likely have a breakout season and could be a candidate for MVP within a few years, if everything goes smoothly. Will Franco become one of the NL’s top power threats this year?

2. The Phillies’ starting pitching is a jumbled mess. Newly-signed Clay Buchholz is probably the most volatile member. Ask Red Sox fan about the fragile Buchholz and they’ll need a deep breath before answering. GM Matt Klentak liked his upside enough that he traded for him this past off-season, something Sox fans were glad to hear of. Buchholz is one of the most inconsistent pitchers in baseball, but has huge upside when he’s on and huge downside when he’s off. Which Clay Buchholz will show up for the Phillies this year?