Cubs, Cubs, Cubs Till You Throw Up 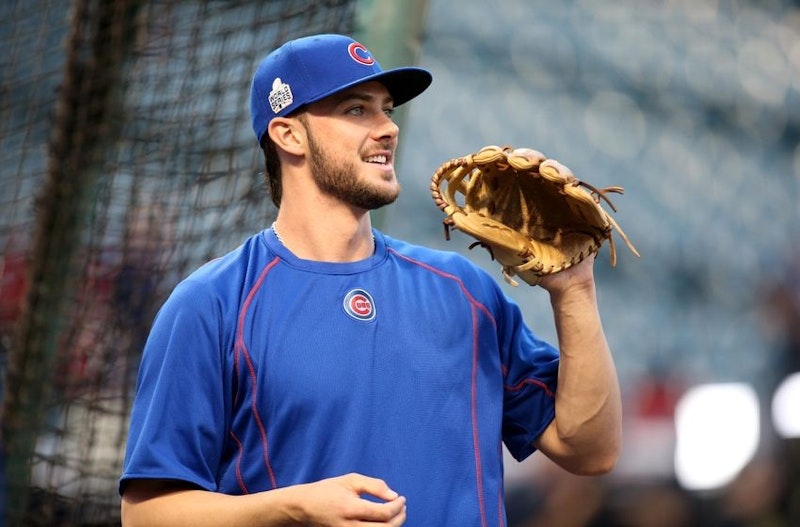 Chicago Cubs: The Cubs’ new goal is simple: win the World Series again. No team has had a better chance to win back-to-back World Series championships since the turn-of-the-century Yankees won three straight from 1998-2000. Can the Cubs do it? Yes, they have the talent and the depth, but there are questions. Dexter Fowler, the sparkplug for the potent Cubs offense last year, has left the team and signed with division-rival Cardinals. But there’s little need for worry if you’re a Cubs fan. A full season with Kyle Schwarber in the lineup will mitigate any potential fallout from Fowler leaving the team. There’s also the reigning NL MVP, Kris Bryant. The young third baseman is coming off only his second year and has plenty left to accomplish in his career.

If Fowler was the sparkplug for the offense, Aroldis Chapman was the anchor for the bullpen for the second half and the postseason in 2016. But Chapman’s gone, back to the Yankees where he started last season before being traded at the deadline. This left the Cubs in need of a closer this offseason. To fill this void Theo Epstein traded Jorge Soler for Wade Davis, who was the best relief pitcher in 2014 and 2015 before an elbow injury sidelined him in the second half of last year.

St. Louis Cardinals: As mentioned above, the Cardinals added Dexter Fowler this offseason in hopes of getting back into contention. The move was a two-for-one: (1) They get hitting help and upgraded their defense in center field and (2) took a key piece of their rival’s offense. The Cubs are the team to beat in the division and the Cards will need to hit on all cylinders with some tough breaks for the Cubs to take the Central this year. The Cardinals’ defense, which was their greatest liability last year, has Matt Carpenter moving from third to first. This means the Cardinals will likely start the season with Jhonny Peralta at third, something that could cause concern given Peralta’s age and having only played half a season in 2016. Additionally, the Cardinals will need to do something with their crowded infield, with Kolten Wong and Jedd Gyorko platooning at second base, though Gyorko could always move to third.

The Cards’ rotation needs to find some consistency this year. Michael Wacha is coming off a down year, after a breaking out in 2016, having struggled with injuries last year and pitching in only 27 games. Lance Lynn is returning from Tommy John surgery. Mike Leake and Adam Wainwright are both hoping to bounce back from a sub-par 2016, but that’s no guarantee. In short, four of their five starting pitchers need to deliver. The upside is that none of those four are being looked at as the ace of the staff. Carlos Martinez has looked strong this spring. The only problem is that he spent the entire offseason playing in the WBC for his Dominican Republic team.

Pittsburgh Pirates: Let’s start with the rotation. It has the potential within two to three years to be one of the best in baseball. Their number one starter is an ace-caliber pitcher, Gerrit Cole. Mixed into the rotation are two recent prospects with Jameson Taillon and Chad Kuhl making the opening day roster in what will be their first full year in the majors. Combine that with another recent top prospect, Tyler Glasnow, possibly joining the rotation as a fifth starter if not starting the season in AAA. Then there’s the offense. Start with Andrew McCutchen. The Pirates’ hopes of contending in this division or making the postseason will rely on McCutchen’s performance. He’s been a contender for the NL MVP routinely since 2012, having won it outright in 2013, until 2016. Last year was the worst of McCutchen’s career with his lowest batting average and highest strikeout totals of his career. Combine his numbers with the fact that he’s made it clear recently that he’s not happy with management, and there are a lot of questions surrounding McCutchen and the Pirates’ 2017 campaign in which they should be contending for a Wild Card spot.

Milwaukee Brewers: The Brewers still have 33-year-old Ryan Braun after moving all their veterans over the past four seasons. Braun would’ve been traded last year if it weren’t for his PED-riddled past and massive contract. Still, he’s a solid baseball player who will hit 25-30 home runs this year, which is good even if he’s overpriced. After that, there’s not much in this lineup. However, there’s always an exception that proves the rule and for the Brewers it’s the fact their future is near with five of their top 30 prospects ready to be called up this season: Lewis Brinson, Josh Hader, Brandon Woodruff, Jorge Lopez, and Ryan Cordell. The rotation is fairly mediocre. Junior Guerrera has an interesting story that makes even the casual fans want to cheer for his success. Still, with the rotation consisting of Chase Anderson, Wily Peralta, Matt Garza, and Zach Davies, there’s plenty of risk.

Cincinnati Reds: The Reds will be the worst team in baseball this year. Sure, it doesn’t help that they play the same division as the Cubs, Cardinals, and Pirates. This is unfortunate for former NL MVP Joey Votto. He can still hit, but his contract is enormous. There’s the possibility he could be worth something to teams ready to win this year come the deadline and, most importantly, have money to spend. There’s also Zach Cozart. Conventional thinking is that he won’t be in Cincinnati on August 1. He’s entering his final year of his contract and fits the bill as a rental for a team looking to make a solid push for the postseason. The rotation is shaky, but they have a lot of young talent who should make the opening day roster or, at the very least, will be waiting in AAA to be called up. Overall, there’s not much to be said for the Reds.