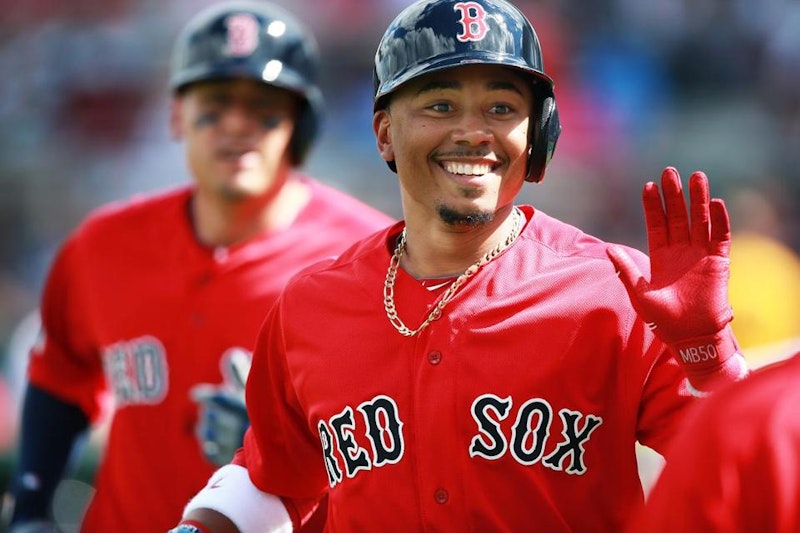 (In order of predicted finish)

Boston Red Sox: David Price's elbow flared up and nearly caught fire in March. The prognosis is a May return, but I'm considering May and June as an extended experiment. If Price isn’t right, my guess is there will be surgery. All of this should make Red Sox fans appreciate the Chris Sale trade. Imagine how the rotation would look with Rick Porcello at the top, and only Eduardo Rodriguez, a semi-healthy Drew Pomeranz, and Steven Wright as the next three. Expect E-Rod to have a breakthrough season now that last year’s knee-wobbles are in the past. His curveball is unfair. The whole rotation seems solid with Sale at the top. “Seems” being the operative word. As the saying goes, "You can never have too much pitching." On a side note, I miss David Ortiz already.

The outfield of Mookie Betts, Jackie Bradley, and Andrew Benintendi is poised to wreak havoc in the batter’s box and steal runs in the field. Without Ortiz’ steadying influence, the first six weeks of the season take on an added weight. The expectations are through the roof for these Sox. The beloved Dustin Pedroia and last year’s revitalized shoulder-happy Hanley Ramirez remain vital lineup cogs surrounding the younger bats. Xander Bogaerts’ steady glove and .802 OPS make him a legitimate building block at shortstop. Considering the 23-year-old is still three to five years from his prime, and it’s no wonder that Red Sox Nation is getting itchy for management to extend young Xander soon.

The bullpen makes me nervous, but that seems inevitable in the AL East. Joe Kelly throws very hard. Craig Kimbrel throws even harder. I hope the bats give Boston some wiggle room and they don’t rely on one-run game wins.

1. Now that he appears committed to positive routines of health and diet, what type of soup will Pablo Sandoval serve all the (somewhat understandable) haters when he finishes the year with 40+ doubles, eclipsing 500 at-bats as the everyday third baseman Sox fans envisioned?

2. Will Andrew Benintendi hit over or under .320, and will the Red Sox outfield become the best in baseball?

Toronto Blue Jays: Losing Edwin Encarnacion to Cleveland in the offseason was a blow to the psyche of Blue Jays fans. Not only did they lose the ALCS for a second straight year, but also one of their most fearsome hitters joined the enemy. When you step back, the Blue Jays lineup is still intimidating. MVP candidate Josh Donaldson remains at third. After delaying, and hoping his price tag would drop, they brought back slugger Jose Bautista. The Jays added Kendrys Morales, a man built to DH if there ever was one. Steve Pearce mashes lefties and Justin Smoak smokes righties, which adds up to one low-cost first-baseman. The moves made sense… even buying exceedingly low on the man formerly known as B.J. Upton.

Still, the rotation is banking on realizing the potential of youth (Aaron Sanchez will be very good and Marcus Stroman is at least solid), the unlikely sustainability of last year’s brilliant J.A Happ, and the trickery of Marco Estrada. Nobody has any idea what Francisco Liriano will do, but he was very good after arriving late last year. Maybe Toronto’s talent for developing pitching wins out again… or maybe there are too many questions.

Among all of these possibilities, two questions:

2. The 34 year-old J.A. Happ is attempting to follow Jamie Moyer’s career path. Tall, thin lefty struggles with control at beginning of career, then learns how to command off-speed stuff and limits the walks. I happen to enjoy these types of pitchers. Can Happ remain a reliably crafty option in 2017?

New York Yankees: You may have heard this: Gary Sanchez hit 20 home runs last year. You may have heard he did it in only 51 games, a total of 233 plate appearances, which is roughly one-third of a season. Sanchez matched the MLB record for quickest to 20 homers in a career. But you’ve probably never heard of the guy he tied, Wally Berger. Gary Sanchez is a catcher. That is one powerful catcher. Some people believe Gary Sanchez will hit 40+ homers. Some people believed Wally Berger was going to hit 500 in his career. Berger was a force during the 1930s with the Boston Braves. As a 24-year-old rookie, Berger put together a ridiculous .990 OPS. He had three great seasons, and finished his career with 242 homers.

The people that don’t believe he will hit 40 in 2017 may point to the very warm month of August, and how homers are more common in August, especially in the northeast and the south where it gets especially hot and humid. Compare August with the other five baseball months (June and July are close). Home run averages by month for all American League teams last year:

They may also point to the fact that scouting reports are always minimal until a rookie hitter has established himself over the first 200 at-bats of his career. Then the hitter is usually forced to make adjustments. Some are never able to cover up those weaknesses. Those that stick, eventually cover up some of those holes.

It seems safe to assume Sanchez won’t slug .832 in a single month again in his career. Especially because he’ll have to show serious patience in the batter’s box before pitchers attempt to throw him an early fastball ever again.

1. Why did I just spend the whole Yankees section on Gary Sanchez? Because other than first baseman Greg Bird, and the enormous Aaron Judge (who needs to figure out how to shorten his swing), the rest of their suddenly very good farm system is at least a year away. That includes up-and-coming 19-year-old shortstop Gleyber Torres (via Cubs in the Chapman deal), and outfielder Clint Frazier (via Cleveland in the Miller deal).

2. How brutal is it to watch C.C. Sabathia now, considering how good he was a decade ago? What a dominant run Sabathia had from 2006-2008 with Cleveland, and then icing the cake with a stellar 130-inning stint in Milwaukee, where he put up a 1.65 ERA and a 1.00 WHIP in leading the Brewers into the postseason and with a wild-card game win. Perhaps it’s not brutal if you’re a Red Sox fan who loves watching the Yankees give up runs, but if you’re a human who appreciates when people are able to gain sobriety after dealing with alcoholism, it’s a little bit brutal. Here’s hoping Sabathia regains enough consistency to see the Yankees into their next phase.

Baltimore Orioles: The All-or-Nothing Orioles. How many slow-footed sluggers can one team field and still be considered a major league baseball team? Dan Duquette estimates the answer is four or five. Last year’s Orioles were very slow and very powerful.

Mark Trumbo, Chris Davis, and Manny Machado crushed 47, 38, and 37 homers respectively. Davis went down on strikes 219 times, Trumbo 170, and Machado a more reasonable 120. The fourth was part-time slugger Pedro Alvarez, who did his part with 22 dingers and 97 strikeouts. At least Machado can handle third base, making a lot of great plays, and steadily handling the ins and outs of the position as well. For all that Trumbo did at the plate, he gave back a sizeable chunk of goodness by playing right field half of the time. Manager Buck Showalter DH’d Trumbo the other half of the games, but might’ve been better off asking Trumbo to retire his mitt completely. Trumbo’s second half swoon (.923 OPS in first half; .724 OPS after the break) left a sour note on his initially spectacular season. If it appears cruel to focus on everything but the 47 homers in Trumbo’s case, consider the Baltimore pitchers who have to hope he’ll run down a gap line drive.

Even the young Orioles have been taught to swing from their heels, as 25-year-old second baseman Jonathan Schoop tallied 137 strikeouts. On the other hand, Schoop didn’t just contribute with blasts (25), he also lined 38 doubles. Still, the lack of walks held true for the entire team other than Davis. The pitching staff was dealt a serious blow with the early spring news of Chris Tillman’s shoulder soreness, the same injury that cost him a DL stint last summer. Whenever one hears “cortisone shot” and “shoulder,” one must tread carefully with expectations. Speaking of expectations…

1. What can Orioles fans reasonably expect from Dylan Bundy? My guess is 150 innings of high strikeouts, and occasionally disastrous starts. Like most fire-throwing young starters, the sense that 96 miles per hour will only get you through six or seven innings if you: a) Can locate it most of the time or b) Have two other reliable pitches.

2. Why can’t Kevin Gausman clone himself and become the ace and the number two? Gausman is merely one man. If he were two, and both of those pitched like the one that is currently on the Baltimore Orioles, then the Gausmans (Gausmens?) would give Baltimore a legit one-two or two-three punch. As it is, Baltimore’s bullpen (which dominated last year, don’t forget) will have lots of mopping up to do with Miley and Jimenez hanging around for now, and with Tillman’s shoulder woes.

Tampa Bay Rays: Let’s wrap this one quickly. The Rays used to have so much pitching. So much. Now, they have Chris Archer and 24-year-old southpaw Blake Snell, who is rather deceptive in his delivery, but hasn’t yet mastered the nasty late-movement that makes him a possible future number two starter. Archer’s 2016 season was a strange one. Remove a few disastrous starts in April and May, and he was as dominant as ever. Include those starts, including the second start of the year, when Baltimore clobbered him for four homers, or his fourth start of the year, when the Red Sox tagged him for six runs, and you get a 4.02 ERA. Allowing 30 homers in 201 innings while pitching in a pitcher-friendly park half the time, isn’t ace-like. On the other hand, Archer held opponents to a .215 batting average and a 3.25 ERA in 91 innings after the break.

1. How did journeyman shortstop Brad Miller suddenly reach the 30-homer plateau, after collecting 29 in his previous three seasons?

2. Does Evan Longoria regret signing that career-long contract extension he signed a few years ago, or is he just happy to know exactly where he will be?

—Follow Jonah Hall on Twitter: @darkoindex. His basketball-themed memoir, The Dusty Jumper, will be available in April.